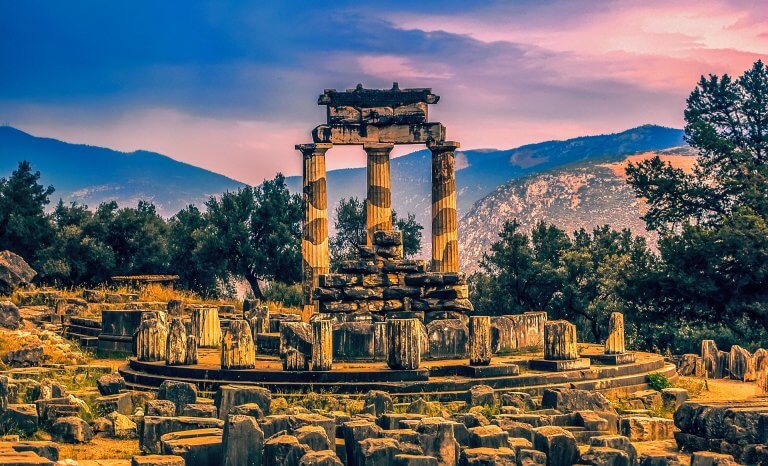 The Oracle is a powerful tool to make enquires about your future. However, this is not the only attribute connected with the Oracle definition. With an oracle, you can explore your inner self, find a better perspective on everything that is surrounding your life, and take the best decisions.

In the early ages, when civilization was taking its first steps, Oracles were considered as the messengers of the gods. Their words were a powerful omen of the coming events and were taken very seriously. Sometimes their premonitions were feared and could have a big influence in the actions of kings and rulers.

Evolution of the Oracle Definition

Perhaps the highest peak or notoriety of these kinds of oracles was reached on ancient Greece when the Oracle of Delphi or the Oracle of Dodona were known even across their borders. In those days, the most common oracles were priests or priestesses. However, this notion soon evolved, and the properties of Oracle were also associated with objects that could guide us in our destiny.

This brought the oracles closer to the people, and nowadays you can enjoy the guidance of oracles in your own home. For examples, among the objects that fit the Oracle definition, you can use oracle cards.

If you are looking for answers, you can consult the cards, and they will provide you with the knowledge you were looking for. Cards are not only very accurate, but they can also open a new perspective that you didn’t know that they existed.

If you are looking for an alternative to Oracle cards, some interesting objects or elements serve precisely the Oracle definition. These oracles are everywhere.

You can find a list of alternative oracles below, with a small guide on how to use them.

Sit down in front of a table where you have displayed an empty glass of water.

Tie a ring to a piece of string and hold the string between the index and thumb of your left hand. Hold the ring above the glass of water then pour it inside.

The oracle will interpret the motions of the ring.

If the ring bumps against the left side of the container: pay attention to your health.

If the ring bumps against the right side: your main passion is whatever you are interested in.

If the rings bumps against the side farthest from its consultant: success, achievements, happiness.

If it bumps against the side closest to the consultant; misfortune and problems.

Reserved for young girls. Starting on the first day in May that coincides with the apparition of the Moon, stare at it nine evenings in a row while holding a little hidden mirror in your pocket or your hand. Then put the mirror under your pillow for the night of the 9th day, asking the moon to let you catch a glimpse of your future husband or wife.

The next day, get out early and give a coin to the first beggar you meet.

If it is a man, you should get married within the next year with the person of your dreams.

If it is a woman, you will need to wait for an additional year.

Use little pieces of paper to write down the names of people you fancy, the wishes you would like to come true, the businesses you are interested in, etc. then curl them like little cigarettes and throw them into a sieve held above a pan of boiling water. The answer will be the first piece of paper to uncurl due to the steam.

Do not forget to add a curled blank piece of paper to the mix. If that is the first one to

uncurl, it means the answer cannot be found among the options you had spelled out.

Pick a large and thin slice of bark, throw it into a bonfire and wait for it to burn.

As soon as the flames have died out, read the shapes and symbols found on the blackened surface as if you read coffee grounds.

Likewise, draw some interpretation from the stains found on some oilcloth or sheet of glass by lamp black and oil mixed together.

Set a collection of little identical paper squares on a table, written side down, on which you have written down several possible outcomes to the questions that worry you.

Softly use a fan right above this collection, and those that are blow away are rejected by fate.

Fill five identical flowerpots with homogeneous earth and sow the seed of the same plant as one another, at the same time and on the same day.

Each pot represents some unforeseen event. The first to come will be determined by the first bean to sprout.

As soon as you hear a cuckoo sing, put your hand in your pocket, grab a coin, and holding while saying:

“Hello, will I get rich?”. The cuckoo gives a favorable answer if it caws twice; doubtful if more than that, or negative if it does not caw at all.

An Oracle that can be traced back several centuries. Ancient auguries would consult the steaming bowels of holocausts that were sometimes human beings. Today this is mainly restricted to the sacrifice of a farm animal or young game (This practice should only be done by experts).

This is what you can read from it:

If the liver has been placed onto hot coal, you can wish for anything and throw a coin there.

1° Gets dry without even blinking: bad omen.

2° You need a few drops of blood

First drop appears on the left.

Second drop appearing on the left: something impossible

First drop appears on the right: some trouble but ultimately success

First from appears in the center: keep hope.

Prestidigitators used this magic process and divination. You have to trace a circle on the ground and then divide it into sections that fit the letters of the alphabet or the kind of answers you would like to receive.

Each section would then receive a grain of millet, barley, or wheat. Then they placed the chicken in the center and wrote down the order in which it ate its food. This would spell the request.

In Tunis, chicken farms are replaced with hungry black roosters.

Girls throw away one of their shoes into the stairs using only their feet.

If the shoe ends up pointing top, there will be no wedding. If the heels are first, it means a wedding but long in coming, having to wait as many days, months, or weeks for it as there were steps walked on during the shoe’s past.

Grab a dandelion flower and blow. If all the stems flow away on the first try, someone loves you passionately.

If there are a few stems left, you are not on the same page for your relationships, and if there is a lot left, then you might eventually become indifferent.