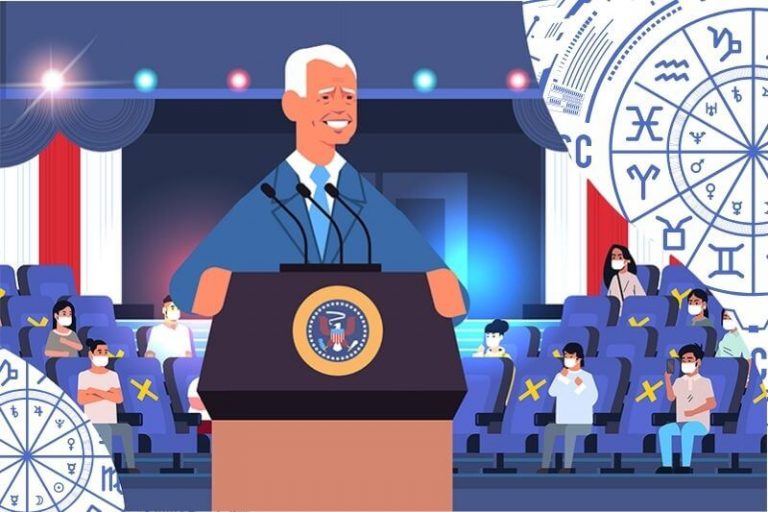 The inauguration of the President and Vice-President of the United States took place on January 20, 2021, and it was a significant day in history as well as a powerful day astrologically.  This article will look at the astrology for the day of the inauguration. Numerous key aspects, transits, and ingresses will occur that day, suggesting a monumental moment, which is likely to be a key turning point in US and world history.

Now that both the President and Vice-President have been sworn in, we have exact times they confirmed their oaths of office.  Kamala Harris confirmed at 11:42 am and Joe Biden confirmed at 11:48 am on January 20, 2021, in Washington, DC when each they said, “I do solemnly swear (or affirm) that I will faithfully execute the office of President/Vice-President of the United States, and will to the best of my ability, preserve, protect, and defend the Constitution of the United States.”

Because there is such a short period of time between each swearing in the differences in the charts are very subtle.  The Moon for Kamala Harris is at 28 degrees and 53 minutes while the Moon for Joe Biden is at 28 degrees and 56 minutes.  The angles also shift slightly.  The rising sign (AC) for Harris is 7d48m and for Biden, it is 9d57 min; the Midheaven (MC) is 21d58m for Harris and 23d23m for Biden.  The overall interpretation does not change for the two of them.

The moment of inception for each leader is ruled by the Moon in Aries; they will have to be fighters and warriors “at heart” to lead the country.  The energy is maverick, independent, and pioneering.  It also falls in the 12th House of Spirituality and Purpose.  There will be a fight for the “soul” of the country, which will apply to everyone within the country since they represent the new and current leadership.

The most powerful astrological event on the day of the inauguration was the conjunction of Mars, ruler of desire and action, and Uranus, ruler of revolution and the unexpected in the sign of Taurus, which represents traditions, foundations, and security.  The swearing-in of the first female Vice-President is very much in line as an example of this energy manifesting in the real world.  What it will mean for the country going forward will be most interesting to watch.  The merging of Mars and Uranus will make this next presidency anything but conventional.  Some greater stability than what we experienced in 2020 will unfold, but that bar for what is normal is pretty much off the scale.  Even new stability will be “unstable” compared to 2019, before the virus arrived.

At 3:40 pm EST, the Sun will leave Capricorn and enter Aquarius on January 19th.  It was less than one degree into Aquarius on the day of the inauguration.  It will reach one degree at 3:15 pm EST.  According to Marcia Moore and Mark Douglas in Astrology, the Divine Science, the keynote for the Sun in Aquarius is, “the power of originality manifests through inventiveness” and the symbol is “a plane loaded with passengers rises gracefully into the sky”.  Fitting images of promise in a time of extreme disruption.

Since the swearing-in happened before 3:15 pm, the Sabian Symbol was 1 Aquarius, which is, “an old adobe mission”.  In his book, The Sabian Symbols, Marc Edmund Jones, says, “This is a symbol of everlasting sustainment, and of the necessity for both an overall orientation and an underlying stability in all personal existence.”  The keyword he assigns is: DURABILITY.

Durability is what the United States democracy and the new leadership will need to navigate the ongoing pandemic, significant social unrest (to the point of domestic terrorism), and economic uncertainty.  There is no easy path forward.

A Grand Square (involving the Nodes, Neptune/Ceres, and retrograde Vesta)

In the book, Astrology Really Works, the authors, the Magi Society, write about a different kind of stellium.  The traditional stellium occurs when three or more points conjunct in the same sign.  They discovered that points at the same degree also form a stellium of immense power and focus.  In the case of the chart of the inauguration six points conjunct by degree, between 18 and 21 degrees.  These include the five points that make up the Grand Square as well as Mercury at 18 degrees 52 minutes of Aquarius.

Mercury is in a powerful position in Aquarius since it represents one of two ways of thinking: visionary and egalitarian or fascist and totalitarian.  The thoughts can come together as a unification for all, or divide into “us versus them”, where one group gains power over all other groups.  These energies will not be resolved with the inauguration; instead, they will be embedded in them, thanks to a square between Saturn in Aquarius and Uranus in Taurus that will be in play for all of 2021.

The Inauguration Charts and the President and Vice-President Charts

Lastly, it is important to take a quick look at each swearing-in chart with the natal chart of the President and Vice-President.

The Moon almost reached alignment with his natal Moon; Mars is just past a conjunct alignment with his natal Moon.  There is also a near, but separating conjunction with Juno returning to itself in his 1st House.  The inauguration Sun squares his natal Moon.  All-in-all, at a glance, this moment is important, but much of the energy is separating, except for the Sun/Moon square, which indicates that the progressive need/nature of the times will deeply conflict with his inner feelings about tradition and the way things need to be.  In short, it will be tough going for Biden as President and he will be “off a step” in his efforts to get things done.

The energy for Kamala Harris has a glaring interaction between the Moons.  The inauguration Moon is nearly exact (and approaching) her natal Moon.  She is definitely here to fight for society in the way she deems is necessary.  She has a strong square with the inauguration Sun; it involves Mercury instead of the Moon (as is the case with Biden).  She understands that idealism often requires using power to achieve larger goals.  With her Moon in Aries and Mercury in Scorpio, she has vital tools to meet the challenge of this moment.  As the new direction unfolds her role will likely assume greater significance, and maybe even greater prominence, than that of the President.