The Numerology of the Number 3 in Tarot

Home » Blog » Tarot » The Numerology of the Number 3 in Tarot 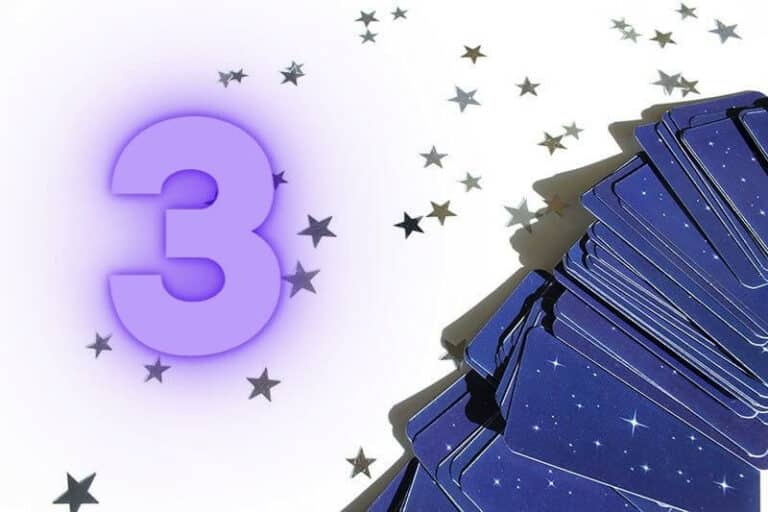 We have the numbers of our birthday, month, and year.  Most countries have a number sequence for citizens (in the United States, it is the 9-digit Social Security Number or SSN).  Most of us have a phone number; if we drive a car, we have a number plate.  Each word and sequence of numbers reduce to a number between 1 and 9, and each of those numbers has a spiritual meaning.

This article will explore the cards of the tarot that represent the number 3.

Seven Cards Represent the Number 3 in a Tarot Deck

There are five number 3 cards and two cards that reduce to the number 3 in a tarot deck.  The Empress is the number 3 card of the Major Arcana and there are four 3s for each of the four suits (cups, pentacles, swords, and wands).  The Hanged Man (12) and The World (21) are both reduced to 3.

Symbolism: A regal woman sits on cushions on a stone throne out in the wilderness.  She wears a crown of stars and holds a scepter, symbols of her power and divine grace.  A heart shield with the symbol of Venus, the planet that rules the astrological sign Taurus, rests beside her outdoor throne.  Venus represents the body and Taurus represents the earth.  A field of wheat is in front of her and a healthy forest is behind her.  She symbolizes the abundance of both; the grain feeds the world and the forest provides the materials for shelter (when used to build homes).

Upright: nurturing, abundance, the feminine divine, and sovereignty over the natural order.

Meaning: The Hanged Man represents knowing sacrifice when we realize we must accept a short-term difficulty for a long-term gain. The Hanged Man archetype is the twelfth encounter for the Fool, showing us the importance of devotion, surrender, and sacrifice as ways forward that are just as powerful as the willfulness of the Chariot lesson.

Symbolism: A young man hangs upside down, but appears relaxed and calm.  He knows he must wait and learn by being patient, as well as by changing his perspective, which is what happens when you view the world from a reversed position.  The light around his head symbolizes the insight and wisdom he gains from his changed viewpoint.

Meaning: The World represents the ending of a cycle to prepare for a new, repeating journey for the Fool (us). The World, as an archetype, is the twenty-first encounter for the Fool, showing us that life is constantly changing and we are meant to build on our experiences.  In this ending is another beginning.

Symbolism: A semi-nude woman dances in the middle of a garland of vines, having reached the end of a process.  The heads of the beasts and the face of the woman represent the four fixed signs of the Zodiac: the bull for Taurus, the lion for Leo, the eagle for Scorpio, and the woman for Aquarius. These “fixed” signs symbolize the stability needed for new disruptions to begin, ushered in by the return of the Fool (the 0 card).

Upright: fulfillment, completion, conclusion, the sum of your efforts, and success

Meaning: Gather your closest friends and celebrate something … anything!

Meaning: Hard and consistent work is what is need to succeed and push forward currently.

Symbolism: A cleric and a merchant approach a craftsman to enlist his services, knowing he has the skills to make what they want.

Meaning: You are getting mixed results and must find a way to face the frustration and sorrow of the situation or relationship.

Symbolism: Three swords pierce a heart in a storm; the heart is whole but filled with pain from each sword piercing it.

Meaning: The path is clear and you need to invest your time and energy to succeed.

Symbolism: The man holds one staff, while two staffs are behind him.  He has a destination charted and is ready to embark on his adventure.