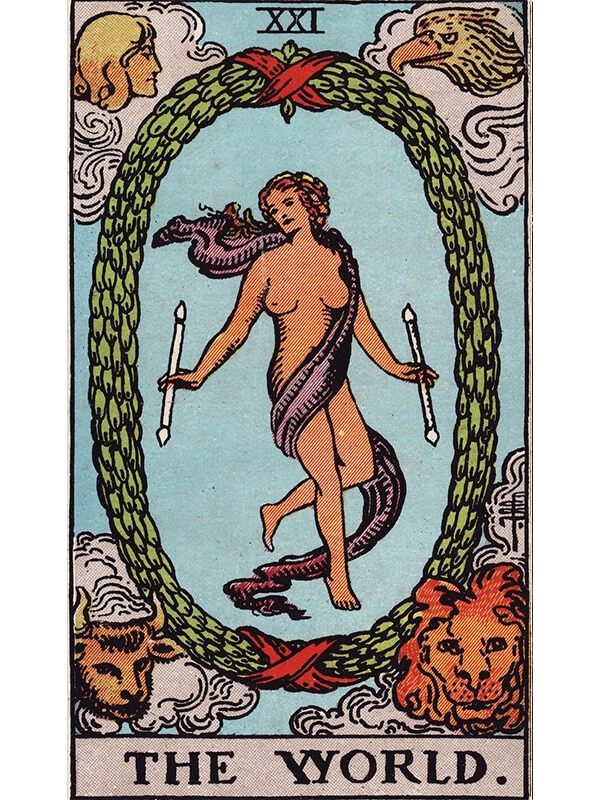 The world tarot card is the final step of the journey, the last among the major arcana, and in a way can be seen as a final conclusion that holds all the lessons that the tarot had to teach through all the other major arcana that came before. With this final step, the cycle is over and the initiate is ready for enlightenment and ascension before the wheel turns and starts again.

Astrologically, the World card is associated with the planet Saturn.

The beautiful, flying, naked woman taking center stage in the World card is meant to represent absolute perfection and illumination. The fusion of the sacred and the profane, of human nature with the divine. She seems to be dancing within a large laurel wreath, itself surrounded with four figures: a man, an eagle, a bull, and a lion. This can either be a nod to the throne of God in the book of revelations or merely as symbols for the four classical elements (Earth, Water, Air, Fire). The dancing woman is holding two wands, one in each hand, echoing the one held by the Magician in the first numbered arcanum in the tarot deck (disregarding the fool as a special case).

The World represents the final moment in a spiritual journey where the seeker has finally reached enlightenment and is ready to ascend before the cycle begins again with the innocent Fool starting the cycle anew.

This is an extremely positive card, usually displaying some kind of inner harmony with your environment and the universe at large. It is a sign that some important goal has been achieved and that you now stand ready to share the lessons you have learned with the rest of the world, or move on to the next project. Wisdom will light the path of those who have reached this stage.

The number 21 card of the Major Arcana, The World, represents the ending of a large cycle in your love and romance journey. It could mean the end of a relationship or just a major transition, like an adult child heading off to college so you can experience having your relationship “back”, but also completely changed. Perhaps you are leaving the dating world of high school behind to begin dating in college.

If you are single, this card will ask you to think about the next transition you need to embrace in your love life. Who do you finally need to stop dating in order to date at a higher level or with a different outcome in mind? What have you finally learned about yourself that is “concluded” that will help you in your pursuit of a new relationship?

If you are in a relationship, this card encourages you to address and help facilitate the ending of a cycle in order to evolve and grow your relationship in some way. Maybe it is time to see your home or your work status needs to change. Perhaps you are facing the end of your two-person dynamic with a new pregnancy. Look at something significant that needs to end in order to begin a new Fool’s journey (the 0 card that follows the 21 cards).

Career encompasses school and education if that is your current stage; work that is necessary, but not what you would consider a career path; and your actual career path. Regardless of your current stage of development, the World represents the time in your study and work journey when you need to transition from one level of accomplishment to another, higher level. You cannot stay in the same phase of development any longer.

If you are a student and this is your card, then you need to think about graduation and what is next, even if graduation is still some time out. Pulling the World card brings focus to your long-term goals with regard to your studies so you can determine if you on the right path to move out of school and into the working world or the next level of education. Has your undergraduate degree prepared you for a masters, or your masters for a PhD?

If you are working, but not doing something you would consider a career, then this card will suggest you need to look at wrapping up what you have been doing and consider another job opportunity. It could be in the same field or in something altogether different. This card asks you to consider that, perhaps, you have gone as far as you can go with your current work and it is time to try something new.

If you are in a career path, then this card can get you thinking about your legacy and what you want to leave behind from all your efforts over the course of your career. Even if you are still in the beginning or middle of your career, the World is the archetype of completion. And a career is something we can envision from beginning to end if we have truly found our calling. If you are at the end, then what will be your next transition?

While the extremely positive essence of the World card cannot be completely erased when it appears reversed in a reading, it nonetheless comes with a warning and can be the sign of a final obstacle standing on your path now that your final goal is ultimately within reach.

More often than not, this final obstacle is the result of lingering doubt that might lurk in your mind, something that makes you question your own worth, skills, or abilities. These doubts can lock you in a state of inertia and stagnation, and the only way out is to gather enough willpower to push through and embrace your true nature.

Reversed, this card suggests there is a change you need or want to make that is blocked. Perhaps you are ready to leave your relationship but do not have the financial means to do so. Maybe you were hoping your child or children would launch into life as adults, but have not or cannot, forcing you to remain stuck in a financially supportive parental role longer than you want to.

When this card appears reversed in a question about work or career, then it is likely a major project or effort to advance is now blocked. All the hard work either led to failure or a need to go back to an earlier stage and start reworking from there. For whatever reason, you are not done with something at work that you hoped would conclude now.

If the Fool was satisfied with their own judgment, they are free to move on to the final step in their journey. Solving the puzzle of their own identity and self from all the pieces gathered on their journey through the 22 arcana of the tarot, the Fool’s journey ends in the World tarot card, when they finally become one with the world around them, in perfect harmony.

The cycle is over, but the Fool now understands that this sort of end is nothing but a new beginning, because nothing ever truly ends. Their body, mind, and soul have been irrevocably altered by their journey through the major arcana of the tarot, and soon they will deliberately become a candid and innocent fool again, starting the cycle anew, each time improving themselves and growing the power, knowledge, and wisdom of their soul.

The Fool’s journey through the arcane secrets of the tarot is finally over when the World card has been reached. The most important lessons in life have been taught throughout this journey and the World card represents the final sum of all these lessons, preparing the body, mind, and soul for ascension to another state of being before the cycle begins anew. This is an extremely positive card that promises happiness and success, a just reward for all the efforts that have been completed so far.

Meditating with the World

Even if the World is an extremely positive card among the major arcana, this might be one of the most difficult to use for personal meditation. Indeed, the World is meant to represent enlightenment and personal illumination, and this is something that is quite difficult to fathom if you are simply not there yet in your own spiritual journey.

However, while not for the faint of heart, this exercise can be extremely rewarding because it reminds you of the final step on your journey, and can strengthen your courage and motivation to deal with any obstacle or hardship on your way.