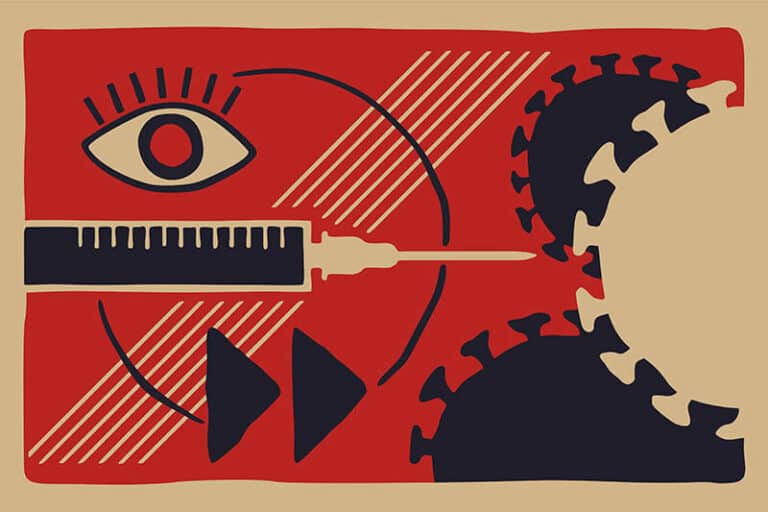 Neptune in Pisces most recently began in April of 2011 and will conclude in January of 2026. Its previous journey through Pisces occurred between April 1847 and February 1862, the years leading up to and at the beginning of the Civil War, which took place between 1861 and 1865. The United States is seeing these energies replay in various ways in the culture of America, which was deeply divided before, during, and after the Civil War. This article will focus on the dispute over the use of vaccines to combat COVID-19.

Each point in the sky rules a specific sign, so when that point is in that sign its energy is strongest and its effects last the longest. Neptune is the modern ruler of Pisces (Jupiter was the ruler before Neptune was discovered). When Neptune moves through Pisces, individuals and large systems, like societies and cultures, experience spiritual awakening. For some, the awakening ushers in changing beliefs while for others the awakening energy increases their resistance to change.

Neptune in Pisces encourages us to have faith, surrender, be vulnerable, and recognize our connectivity to everyone on the planet. Neptune wants us to understand that we are all in this together. These are the positive traits of Neptune in Pisces. Its shadow energy is delusion, disbelief, confusion, and deception. It can be hard to “know what is real” while Neptune occupies its own sign.

During the time Neptune moves through Pisces humanity learns how belief shapes the world, and how competing beliefs battle over the construction of civilization when they cannot find common ground, which is what happened in the previous period of Neptune transiting Pisces in the United States.

In 1861, the clash of beliefs regarding slavery reached a point where they could no longer exist in the same reality, marked by the Battle of Bull Run (also known as the Battle of Manassas), the first battle of the Civil War. These beliefs were not the only ones to face discord. Charles Darwin published the Origin of the Species in 1859, which would effectively usher in ever-expanding atheistic views that would challenge the religious hegemony, which dominated most of western history. This period revealed an “either/or” energy that could not accommodate a “both/and” belief system.

The problem with limiting belief systems like racism is their inability to answer clear examples of the reality that prove them wrong in definitive ways, such as the brilliant mind of Fredrick Douglas (1817 to 1895), a slave given an education, who proved to be one of the most eloquent writers and accomplished thinkers of any generation. Hitler’s Aryan superiority was roundly crushed in the 1936 Olympics when Jesse Owens won four gold medals in Track and Field events. Unfortunately, like so many who hold their beliefs deeply and are unable to realize they are wrong, they actually “double down” in an effort to keep the reality they wish for from being heaped onto the dustbin of historically wrong views about human development and ability.

Therefore, it is not surprising that, as an aspect of American history, the polarization of beliefs is once again peaking during the period that Neptune is in Pisces. We can see it in many different forms, but one of the most blatant is the battle of beliefs over the use of vaccines. And like the Civil War and the issue of slavery, there is not really a both/and answer here; it is an either/or circumstance, which is being thrown into even more stark relief with the arrival and spread of the Delta variant of the COVID-19 virus.

The Vaccine Civil War and Belief Versus Reality

COVID-19 is changing reality much in the same way that industrialization revolutionized the world between 1760 and 1840, which would prove to be the underpinning of change that would feed into the circumstance leading up to the Civil War. A similar change, in reality, has continued to occur with evolving epochs of globalization, beginning with exploration in the 1400s up until the peak of the industrial revolution in 1800. The next wave of globalization ran from 1800 to 2000, peaking with World War II and its aftermath.

Globalization has accelerated since 2000 with the spread of the Internet and the most connected international supply chain in the civilized world, and the constant migration of people, which we now understand better and more fully because of the impact of COVID-19. COVID-19 essentially brought the world to a halt in 2020.

The impact of COVID-19 on belief systems is profound. The last time the world experienced a global pandemic on a similar scale was with the flu between 1918 and 1920, so the comparison of COVID with the flu is accurate if one is referring to the flu in 1918 and not the flu in 2018. The flu in 1918 was just as effective at spreading as COVID was in 2020 because there was no vaccine at the time. Vaccination for the flu did not occur until the 1930s when the first vaccine was developed in 1938. And large-scale vaccination did not occur in the US until 1945.

Cases dropped dramatically after the implementation of the vaccines. Today a similar reality is unfolding, supercharged by the new Delta variant. There is the reality that COVID-19 is a virus with a specific makeup that can be identified through testing. A person has contracted COVID-19 if they have the material that is the virus in their system when they are tested. The virus is effective in attacking and damaging the human host, ranging from mild symptoms to severe ones, as well as causing death.

Reality is being changed by COVID-19, just as reality was reshaped by war, technology, and other diseases in the past. What we can expect, astrologically, is the pattern of belief regarding vaccines in the US will likely follow the same pattern of belief regarding slavery from 1861 to 1865. As unvaccinated people continue to make up the vast majority of severe cases and deaths associated with COVID, the reality of vaccination as a reasonable solution to the problem on a large scale will likely follow a similar belief pattern seen in the history of the US when Neptune moves through Pisces and then entered Aries between 1862 and 1864.

The Decans of Star Lion Leo