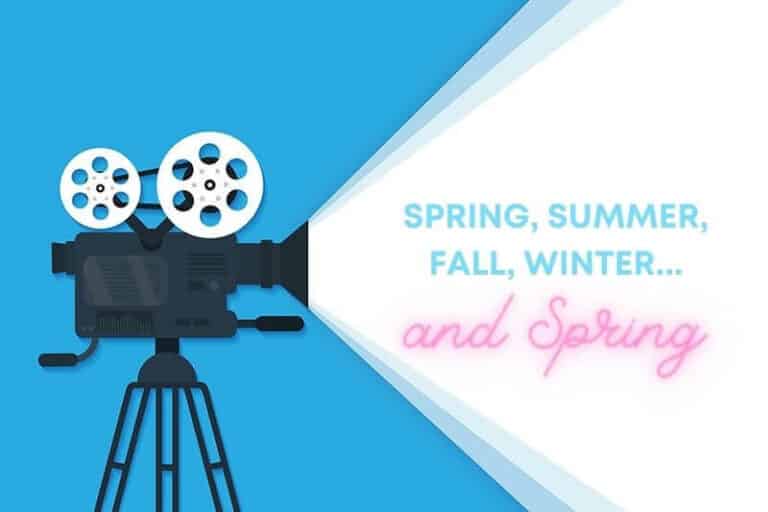 In persistently difficult times, like we are experiencing due to the ongoing pandemic, finding entertainment that can lift us emotionally and spiritually proves to be especially worthwhile. This article will review the South Korean movie Spring, Summer, Fall, Winter… and Spring, which came out in 2003.

The film, by South Korean director Kim Ki-duk is about a Buddhist monk over the course of his life, divided into the four seasons: spring (childhood), summer (adolescence), fall (adulthood), and winter (the end of life).

The story is told from two points of view, that of a master monk and his disciple. The disciple is a child, representing spring while the master, at the beginning of the movie, represents fall. The story is told with beautiful cinematography aligning each season, visually, with each stage of the story of the disciple growing up.

The first act of the movie shows the young disciple tormenting three animals and how the master teaches the boy compassion by cleverly giving him the experience he inflicted on the animals.

The second act of the movie shows the disciple as a teenager. A mother, with her teenage daughter, arrive at the monastery in hopes of healing her ill daughter. The two young people fall in love and the disciple leaves the monastery.

The disciple returns to the monastery after murdering his wife, the young woman he ran off with, in a fit of jealousy due to her adultery. He attempts suicide, but his master will not allow it. He is arrested and taken to jail.

The disciple returns to the monastery after being paroled; his master has since died and the monastery is without a caretaker. He assumes his master’s role and becomes the new master of the monastery. Not long after a woman with a young child comes and abandons the child at the monastery.

The young child becomes the new disciple, and the cycle begins again.

When we hear the saying, “there is nothing new under the sun”; it is often conveyed to indicate patterns in life that we all repeat, individually, and as humanity, that never change, even if the “times have changed”. This movie powerfully conveys the choices we make and the consequences they lead to, which turn out to be rather predictable should certain decision be made in certain ways at crucial times.

What is valuable to understand in the movie is which consequences can be taught and which ones come from choices and life experience. On the largest scale, the message seems to be, “life goes on”. The “lens of the camera” focuses on the monk and his disciple, who becomes a monk late in his own life, and how the process of becoming a monk unfolds in a, well, idealized way.

What we do not know is the story of the older monk at the beginning of the story and what will be the story of young disciple at the end of the movie. We can assume that becoming a monk involves living and experiencing the tragedy of life, with extreme moments of happiness and despair.

We do not know the story of the mother and daughter, except as it intersects with the monk and his disciple. In fact, the backstory for women is not very promising, but no less accurate or appropriate. We do not get the story of the young man running away with the young woman and living a joyful life. It exists but is not the story for this film.

The message of the film is not the fatalism of this particular outcome, but that life is made of cycles, and each one will present common themes everyone will experience and face their choices within. Some patterns define certain archetypes. They “make a thing that which it is”.

The First Truth of the Four Noble Truths in Buddhism is “suffering, pain, and misery exist in life” and we must all face these truths and overcome them to live a full life in this incarnation. The other three Truths are:

One succeeds in overcoming suffering by finding and following the eightfold path:

Or, put another way, “nobody gets their character tested when things are going their way”.

I do highly recommend this film, both as a spiritual advisor and film connoisseur. It is not an easy film to digest and may strike a deep chord, which it should, if watched in these current times. This pandemic is but one of many in human history, and we are largely handling it pretty much the same way pandemics have been handled in the past. There is a “pandemic pattern” with various set roles and each of us is playing the right role we need karmically.

It is important to remember that the movie can be written in many different ways with many different outcomes, all of which would be valid. But the choices for this movie by this director wanted to capture the essence of stages of maturity, which are fixed as human patterns of development: unawareness (childhood/spring), awareness without experience (adolescence/summer), consequences (adulthood/fall), and awareness (elderhood/winter) … and renewal of the process (spring again).