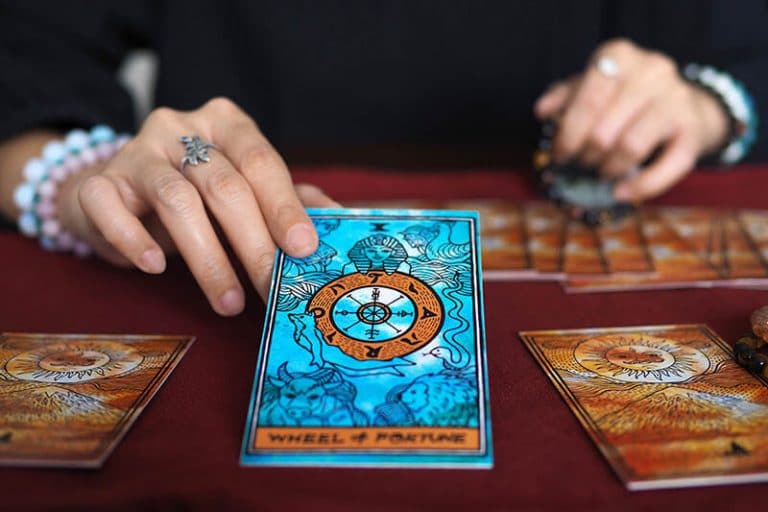 What is the Tarot’s general guidance for making the best of the cosmic weather this month, spanning the zodiac signs of Virgo and Libra? The cards illustrated below are from the Rider-Waite Tarot deck, also known as the Smith-Waite deck, in recognition of the artist, Pamela Colman-Smith.

General Theme – The Six of Pentacles

This card is highly topical at the time of writing (23 August) as the US, UK, and other countries consider their responses to the recent events in Afghanistan, the fall of Kabul, and the terror now facing many ordinary people, faced with the return of a murderous regime. Their elected President has fled, and many in the country appear to support the Taliban as preferable to unwanted western interference in their affairs. In July we forecast the possible departure in August of a Head of State. This happened when President Ashraf Ghani of Afghanistan recently fled to the United Arab Emirates, reportedly taking with him £123 million of public money, although this has been denied.

For the time being, Taliban leaders are making diplomatic noises of reassurance. But events on the ground are not consistent with this, and meanwhile, the Taliban will be seeking to neutralize any possible resistance in the Panjshir Valley, 150 km north of Kabul.

How may we best care for our own people, while also helping others to whom we may feel a duty of responsibility?

This is the challenge represented by the Six of Pentacles, and there are no easy answers, while evacuations are ongoing, of US and selected at-risk Afghan nationals.

The theme of the benevolent, well-meaning Six of Pentacles is ‘noblesse oblige’- that sometimes we do a thing simply because we feel it is the right and proper thing to do. We do it for these reasons, not because we must. No one is making us do it.

Who are we? Whom do we belong to? What can we offer our community? What support can we expect from it?

A warning that comes with this card is, ‘fools rush in’. Not everyone wants charity. Not everyone who claims to be deserving of charity truly is. Beware of scammers posing as charities.

What in the 21st century is the meaning of a community? Is it international, national, regional, local, or in cyberspace, online? These things overlap. What is our place in our local community? What is our duty to it? What is its duty to us, if any? How far does, and should our charity extend to those who may never be able to repay our help?

On a personal level

The Six of Pentacles is associated with the fixed earth sign Taurus, and the second decan of this sign (10-20 degrees) is ruled by the instinctive Moon according to the Chaldean system, and also Mercury, according to the system of triplicity.

The Sun passes through this decan roughly between April 30th and May 10th. If your birthday falls on or between these dates then this is “your” card.

These Taureans are hard-working people, kindly, conscientious, with a creative but at the same time analytical turn of mind. They often have a noticeably pleasant speaking voice and may be gifted or even famous presenters, public speakers, or singers. UK actor and presenter Joanna Lumley is a second decan Taurus, 1 May, ‘one of the most recognized voices in the UK’.

Uranus in Taurus went retrograde on 19 August. This is likely a somewhat calming influence in general. But on a personal level, if some change is long overdue, or a situation needs an overhaul, and you have been putting it off; say, you want to move, or you need a career change, or even to get involved with local politics, this retrograde might be the time it happens. You finally make a decision, or the issue gets forced, and this may well turn out to be a good thing, with an eye on this time window, between 19 August and 19 January 2022.

We see a calm, beautiful woman sitting in a ripening field of wheat, crowned with the stars of the Egyptian love goddess Isis. She is also Mother Earth, and Greek goddess Ceres, also called Demeter. Her shield bears the glyph of the planet Venus, named for the classical goddess of love and beauty.

Virgo is a mutable earth sign, symbolizing the transition from summer into autumn. This chimes with a change in mood, and marks a natural opportunity to revamp our home, or our diet, or our spending habits, or be more involved with our local community again after long periods of lockdown.

But Virgo is focussed on health and hygiene, warning us not to relax our guard too far, remaining vigilant about such measures as hand-washing and distancing as the children return to school and the community starts mixing again. This Empress is a hugely positive card, but it is very much about common sense.

Politically, The Empress highlights the issue of the status accorded to women, i.e.; half of all humanity, across different societies. This will continue to be a dominant topic in the news headlines in September as the world anxiously watches events in Afghanistan, while not forgetting the treatment of women in other Islamic countries, Niger, Chad, etc, rarely mentioned in the news.

The New Moon in Virgo 7 September places a spotlight on our routines and habits. September is a new test in terms of where we are at collectively with the pandemic situation, now that children are returning to school after the long summer holidays.

Is there just one change we could make this month that would make our day run more smoothly? Is there something we would be better off without?

Venus, the planet ruling love, friendship, the Arts, and let it not be forgotten – money, is in the zodiac sign of diplomatic Libra until 10 September, when she moves into Scorpio and stays there till 7 October.

This might turn up the heat for a while, romantically or in other ways. Whereas Venus in Libra is smooth, harmonious, diplomatic, and can charm the birds out of the trees, Venus in Scorpio is intense. This might make itself felt in a good way, with a burst of creative energy.

Venus in Scorpio can be a bit of a sexy beast. Moments of passion – think of Wuthering Heights, and Cathy and Heathcliff. But it can be quick to anger, brooding, vengeful. It can mean overspending on non-essentials. It could mean an unwanted admirer or a disagreement that threatens to escalate at home or at work.  Mars goes into Libra on 14 September. Watch out for passive aggression, whether you are the one dispensing it, or on the receiving end.

But in general, in our personal lives, at home or at work, The Empress is a mother figure and a wonderful listener. She has the ability to calm many a storm at home or at work, simply by listening calmly, keeping her cool and her poise, seeing to the heart of the matter, and applying common sense.

Challenges -The Ace of Swords

This is an energy that can get a lot done, but the first few days of the month, 1-3 September could be somewhat frustrating. Mars is in dreamy Neptune, might be urging action. We want to tackle it, but there is a lack of clarity of information and uncertainty about what is the best thing to do.

We see mountains in the background of this card, suggestive of Afghanistan, or Pakistan, China, or Iran. These regions will dominate the news again in September, while the Ace of Swords has a military Mars energy attached to it, unsurprisingly, given ongoing global events.

The Ace of Swords represents the concept of the Law, and International Law, backed up by force if need be. What is the future for NATO and the United Nations? These are pressing questions this month as we enter Libra, 22 September, the day of the Autumn Equinox. Libra is the zodiac sign of Law, Justice, and Diplomacy.

Lucky numbers 2 and 7: Libra is the seventh zodiac house of all things to do with partnerships, contracts, and agreements; global, public, and personal. Close to home it can mean marriage.

Could the King of Swords be detecting a new emerging leader for armed Afghan resistance against the Taliban? Rumors abound but if this happens, it won’t be immediate. Time will tell.

Remembering that first card, the Six of Pentacles, we may feel this is none of our problems. We have problems of our own. But the Taliban (from Talib meaning ‘student’) represents a global crime and drug cartel with direct implications for our own forces of Law and Order, and Border control.

In Summary: Advice card –The King of Swords

The King of Swords is the Tarot court card equating with the zodiac sign of Libra, starting 22 September.

In real life, when this king is someone we know, he may be a Libra, Aquarius, or Gemini subject, and can come across as capable, formidable, somewhat unpredictable, or unapproachable. He is good at abstract thinking, often highly numerate. He is known for being stern but fair – when operating at his best. Plus he may have quiet charm. But he can ‘turn’ with little warning. If he is someone in power, he may behave as a champion of what is right, or he may behave as an aggressor.

Media attention in September will remain focussed not only on Afghanistan, and the political repercussions in the United States, but Iran and maritime security shipping. This follows an unprovoked attack on a UK oil tanker off the coast of Oman on 29 July in which two people were killed; the Romanian captain, the other, a British national. The UK, the US and Israel, and also the EU have blamed Iran, which denies responsibility. This incident has major implications for potential future threats to international shipping in the Gulf and the Strait of Hormuz. The UK government is considering its response

On a Personal Level

Libra Season is a time for considering how we conduct our own, personal negotiations, and how we are cooperating with the people around us—do we need to reassess and renegotiate where we stand?

The King of Swords suggests that you stand your ground, cool, calm, respectful, firm but fair in consulting the rule book, or clarifying, establishing, or protecting your boundaries, priorities, wants, and needs.

Mercury, the planet of communications, goes retrograde again this month for the third and final time this year, stationing retrograde in Libra 27 September, but potentially making its effects felt from 6 September onwards until it goes direct again on 18 October, and finally leaves the retrograde shadow 3 November.

When a planet goes retrograde – we also have all four outer planets going retrograde at different times this year – it appears to move backward in the sky as seen from Earth, due to differences in speeds of orbit.

A Mercury retrograde can bring, more of them than usual, miscommunications, misunderstandings, people ‘taking things the wrong way’, or technical or travel glitches. Deliveries may go astray or else things break down.

This is a time for double-checking emails, letters, and paperwork before posting or pressing send. Travel plans? Allow extra time for delays or cancellations.

It’s nothing to worry about. Nor is it a case of life on hold, though it may not prove to be the ideal time to launch a major new venture, but a Mercury retrograde lends itself especially productively to such activities as taking stock, research, planning, preparation, reviewing, and reflection.

This Virgo season says, to paraphrase the poet John Keats, “a thing of beauty is a joy forever.”

Wishing you all good things in beautiful September – “Season of Mists and mellow fruitfulness” – from An Ode to Autumn Keats. 1795-1821

Universal Number Five Year – How to Excel in 2021?