This article will look at one of these dynamics happening between two points this month, Mars in Scorpio trining Neptune in Pisces. When two points trine with one another, they support one another.  The point of desire and aggression will give support to and get support from the point of dreams, surrender, and spirituality.

The Trine, and Mars and Neptune

This month, when the faster moving Mars goes reaches 15 degrees 59 minutes (15d59m) of Scorpio, it will trine with Neptune at the same degree, but in Pisces, at 6:20 am EST on December 13th.  The impact of this relationship begins to be felt up to 3 degrees before and 3 degrees after the exact aspect and is known as the orb of influence.  When the faster moving body approaches, the aspect is said to be approaching and is building energy.  Once the exact aspect has passed, the aspect is said to be separating and is losing energy.  The duration of this particular aspect will run from December 8th to December 17th. 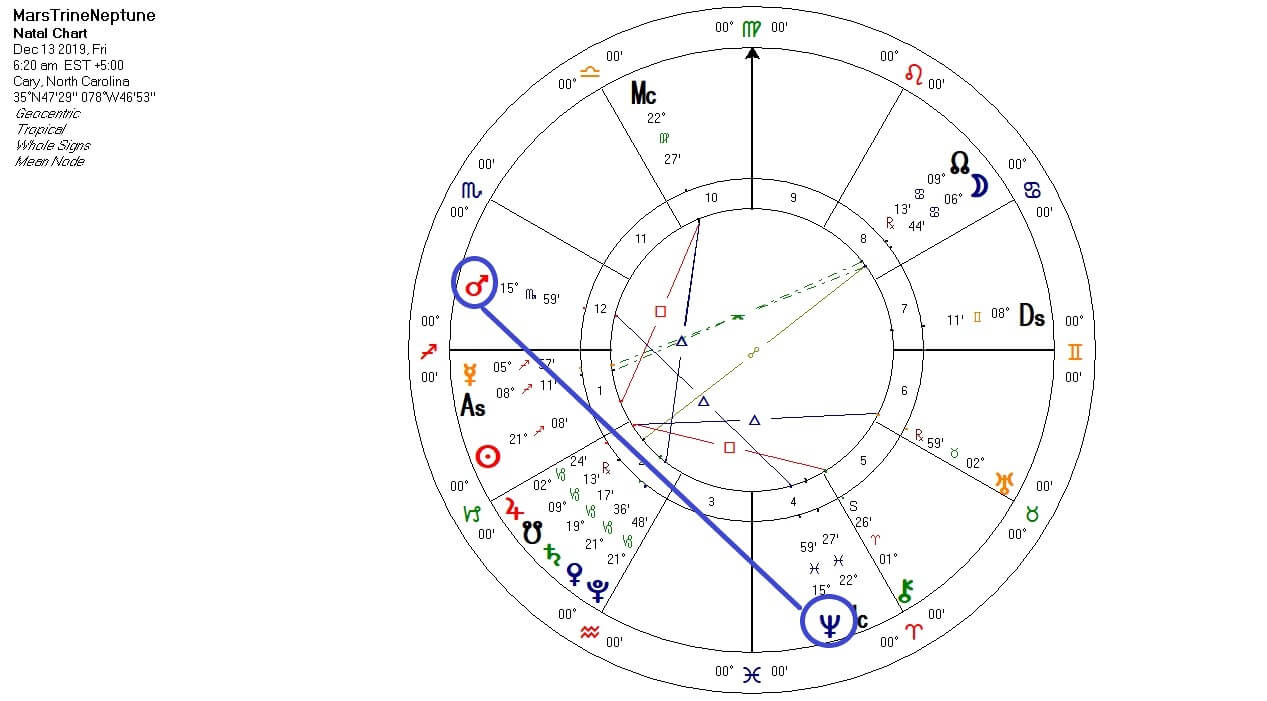 With Mars moving through Scorpio at this time, the keynote is, “hidden reserves of power explode into action” and the symbol is, “miners drilling deep into the bowels of the earth strike oil” (Astrology: The Divine Science, Moore and Douglas, 137). With Mars in Scorpio, it looks to Pluto for additional guidance.  Pluto is currently in Capricorn, so Mars needs to act with sustained effort.

The keynote is, “the power of spirit moves through all individuals” and the symbol is, “a beggar and a wealthy person share food and philosophy on a park bench”.

The Sabian Symbol is 16 Pisces, “the flow of inspiration”. Jones says, “this is a symbol of the spiritual power which the development of civilization has brought to a point of practical potentiality, and on which each person may draw in meeting any and all critical issues of everyday living”.

The trine aspect creates a powerful flow between two points. If a sextile aspect, also a flowing aspect, is a straw’s diameter, then a trine is the glass or cup diameter the straw would be sitting in to extract the liquid.  Mars and Neptune trine in water signs represents a powerful surge of spiritual energy and directed purpose.

The connection to spirit and dreams will be particularly intense during this stretch of time so you might find it very useful to have a journal near your bedside, especially if you want to capture, in writing, what you are feeling passionate about.  Neptune is mysterious, but Mars is direct; it can burn through the fog that Neptune creates.

There will be an intensity to act based on spiritual purpose. This combination could easily be interpreted as “the defenders of the faith” or the warriors of God, the avenging angels, Michael and Azrael. Mars is an engine of power sending energy into Neptune while Neptune is a source of belief and the connection to spirit.

In traditional, Hellenistic astrology Mars was also the ruler of Scorpio, so you have two points in their signs of power, suggesting that we will all feel some form of spiritual passion during this transit, which may lead us to act or defend, depending on the beliefs we hold dear.  This really is not the transit of “turning a blind eye,” or “the other cheek”, but rather the one that embraces “an eye for an eye”.

While this transit is passing, it will be like holding Uriel’s flaming sword.  We all need to use this energy wisely.  The intense energy that will pour into our spiritual being could prove to ecstatic or overwhelming depending on how far you are into your individual spiritual journey and practice.

The Astrological Associations with the Wands Suit of the Minor Arcana