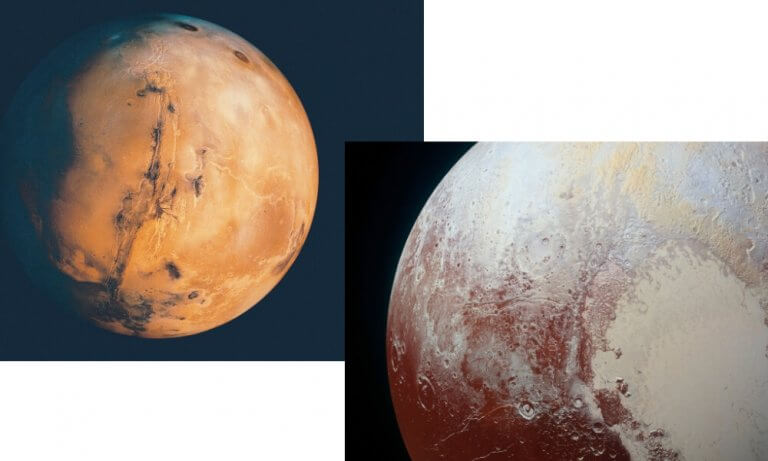 Throughout each month transiting points create dynamic relationships with your natal chart.  Often times two transiting points will create a dynamic exchange that affects us all in particular ways related to the points involved.  Sometimes energies merge together when two points occupy the same degree within the same sign; other times they try to strike a balance, as they will when they are 180 degrees apart and opposing one another.

This article will look at one of these dynamics happening between two points this month, Mars in Cancer opposing Pluto in Capricorn.

The Opposition, and Mars and Pluto

This month, when the faster moving Mars reaches 22 degrees 27 minutes (22d27m) of Cancer, it will be exactly 180 degrees away from Pluto at 22d27m of Capricorn on June 19th at 10:50 pm EST.  This 180-degree angle between the two points is called an opposition. The angular relationship between two points is known as an aspect.  The impact of this relationship begins to be felt up to 3 degrees before and 3 degrees after the exact aspect and is known as the orb of influence.  When the faster moving body approaches, the aspect is said to be approaching and is building energy.  Once the exact aspect has passed, the aspect is said to be separating and is losing energy.  The duration of this particular aspect will run from June 10 to June 18.

Mars represents our drive, our passion, and our aggression.  Where Mars resides in your chart reveals the nature of your drive and how you are most likely to express that energy.  My Mars is in Taurus, so I tend to project a “Taurus-like” way of pursuing my passions and I tend to appreciate “Taurus-like” drive from people.  Mars struggles in this sign since it naturally rules Aries and prefers to charge ahead, while Taurus prefers to hold steady and make changes slowly.  With Mars moving through Cancer at this time, and since May 16th, we should notice more protective behavior with regard to and from the people closest to us (Cancer rules the 4th House of Family).  Cancer is a water sign, warm healing water specifically, and water signs reflect our emotional energy as humans.

Pluto represents death and rebirth, transformation, and deconstruction and reconstruction.  Pluto rules the “underworld”, elimination processes (in the body, the colon, and rectum), disruptive forces in the earth (earthquakes and volcanos), and life or death shifts.  Where Pluto resides in your chart reveals the transformative nature of your generation (Pluto stays in a sign anywhere from 17 to 31 year).  My Pluto is in Virgo, so my generation is dedicated to bringing profound change through health, service, and practical problem-solving.  With Pluto moving through Capricorn at this time, and since November 26th, 2008, we are getting deconstruction and reconstruction on the structures that we have set up in our lives and the ones created around us.  Capricorn is an earth sign, cardinal earth specifically, and earth signs reflect the physical world and how we deal with it.

Mars Opposes Pluto: How My Life Changes Because the Rules of the World are Changing

Opposition aspects seek balance; the points and signs involved need to reconcile and find harmony. During the period of this opposition, the point involving drive and passion and the point of transforming the world will be in an opposing alignment in the last third of their journey through their respective signs. This opposition will be intense because Mars wants to do what it wants to do and Pluto wants to eliminate what is unwanted and unhealthy. You have the God of War interacting with the God of Death.

Cancer’s nurturing energy opposes Capricorn’s responsibility energy the way feminine energy opposes masculine energy, not to be at odds, but to balance one another. Cancer and Capricorn are the classic signs of the mother and the father. Whether we are dealing with our own internal need to balance compassion with the demands of life, or we are looking at a company that is out to make a profit while also taking care of its customers and the society that provides its business opportunity, these two energies can be highly problematic when “out of balance”.

This tension in this opposition is no small matter because of the points involved and the energies of the signs.  Mars in Cancer can very much present as “I have to protect my own and that matters more than anything else” while Pluto in Capricorn looks for transformation within a larger system, or it destroys a system that no longer functions properly.  When working in harmony, the high expression of this combination is a change that affects the personal and global in ways that embrace responsibility, protection of the weak, and a willingness to end corruption unflinchingly.  In the shadow, it can express as nasty forms of destruction (actual wars), corruption (the strong preying on the weak), and extreme debt (borrowing against the future to pay for a present that has not been properly earned).

Figuring Out How to Make Massive Changes without Blowing Everything Up!

Mars in Cancer can either be the superhero/superheroine or the villain.  What makes for the extreme energy either way is the highly personal and emotional nature of Cancer.  Tremendous energy comes from emotional trauma or passion, and Mars in Cancer is the pinnacle of that focus. Pick any modern action movie where the hero or villain uses the emotional personal moment to assert the righteousness of his or her cause.  Not only is it an issue of circumstance, but more powerfully an issue of emotion.  The current wave of anti-globalism has its roots in the wronged feelings and wronged circumstances of groups of people who feel left behind by the rapid global changes.

Pluto in Capricorn prefers to operate with a need to transform large systems; it entered with a bang – the global financial crisis of 2008 when markets melted down due to the housing bubble in the United States.  It shows its power by letting individuals know that large systems are not immune to breaking down.  When Pluto in Capricorn is operating positively, we move aggressively towards necessary changes with stoic gratitude and unflinching intentions to be responsible.

How these energies will attempt to strike a balance or show the extreme of imbalance will depend on the circumstances of our personal lives and the global zeitgeist. Sadly, one common theme seems to be running up and down the scale of personal and global security, and that is debt.  What system do you think could never fail?  Your country’s pension and retirement program; your country’s defense budget; education as “you have always known it to be”; the stock market?  It is very possible that this month of June, with Mars opposing Saturn (another article on Ask Astrology) and Mars opposing Pluto, at roughly the same time, there will be some major triggering event to break one or several systems in order to make space for rebuilding.

It is very possible that during this transition we will become even more aware of the imbalance of compassion and responsibility. If so, we must do the work personally to make sure that we have our responsibilities in hand (Capricorn) and we are not letting fear trigger the Mars in Cancer energy to attempt to eliminate or destroy (Pluto) those who are “not of our family” or other.  We have hard choices to make and this energy wants us to step up in a noble way to bring what we know are needed changes to fundamental issues in our societies and world.