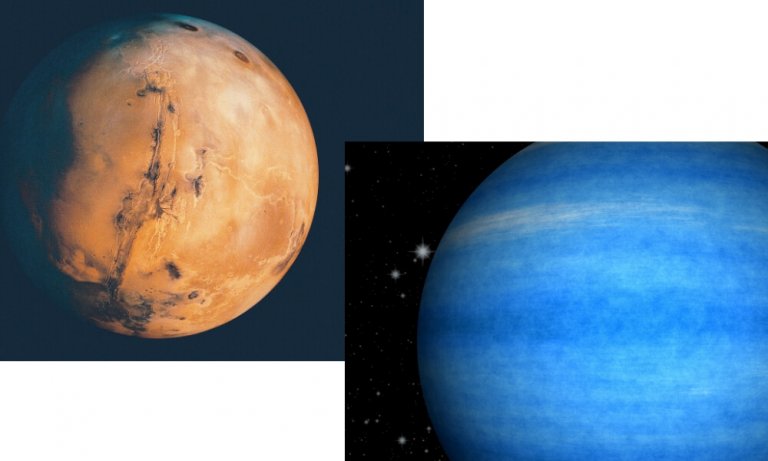 Throughout each month transiting points create dynamic relationships with your natal chart points.  Often times two transiting points will relate to one another in a way that affects us all, depending on the points involved.  This article will look at one of these dynamics happening between two points this month, Mars in Virgo opposing Neptune in Pisces. When two points oppose one another, they seek balance.  The point of action and desire will seek balance with the point of surrender and faith.

The Opposition, and Mars and Neptune

This month, when the faster moving Mars reaches 17 degrees 12 minutes (17d12m) of Virgo, it will oppose Neptune at the same degree, but in Pisces, at 1:20 am EST on September 14th.  The impact of this relationship begins to be felt up to 3 degrees before and 3 degrees after the exact aspect and is known as the orb of influence.  When the faster moving body approaches, the aspect is said to be approaching and is building energy.  Once the exact aspect has passed, the aspect is said to be separating and is losing energy.  The duration of this particular aspect will run from September 10th to September 19th.

This dynamic aspect will run parallel to the Mercury and Venus in conjunction from September 8th to September 20th. The high point of September 13th and 14th will hit all of us with a significant amount of energy in Virgo, which seeks to serve, and problem solve.  Neptune energy prefers to allow and unfold effortlessly, like water running along the path of least resistance.  However, if the water keeps running, it will eventually wear a path and reshape the landscape.

Mars represents the masculine divine and what we desire, our passions, and our drive to compete to get what we want.  Mars rules Aries and the 1st House of Identity. Before the discovery and assignment of Pluto, Mars also ruled the 8th House of Intimate Relationships (transformation and sexuality). Where Mars resides in your chart reveals your primary drive to assert yourself and your energy.

My Mars is in Taurus in my 7th House of Partnerships, so I am “driven” to establish relationships that will last and that I can rely on and feel safe about (Taurus). My drive is also very physically expressed, both in terms of how I keep my body in shape and how I prefer to be very physical with my intimate partner where touch is very grounding for me.

With Mars moving through Virgo at this time, we will benefit from establishing or seeking new routines to improve our health.  Mars is a fire point that is impulsive making a journey through an earth sign that rules attention to detail and methodical processes, which can make for a testy relationship, energetically speaking.

The Sabian Symbol is 18 Virgo, “an Ouija board”.  Jones writes, “this is a symbol of the completeness with which man is able to see his experience both steadily and whole, dramatized here by the planchette as representative of effective anticipation or true rational divination”. He assigns the keyword as ACUMEN. Further, he says, “when positive, the degree is cleverness in making use of everyday insights and intimations, and when negative, bondage to superstition and surrender to the unknown” (Jones, The Sabian Symbols, 316).

My Neptune is in Scorpio in my 1st House of Identity, merged with my Ascendant (how people “see” me), so I am viewed as a spiritual or mystical individual.  This identification is not easy to see in myself unless it is reflected back to me by those around me, which it has been.  I currently make my living as a spiritual adviser; it is my profession and my identity.

With Neptune moving through Pisces at this time, the entire planet is getting spiritually awakened.  Neptune’s influence is never direct, never even easy to assess.  A simple joke describes the essence of Neptune: two young fish are swimming along, and older fish approaches them and says, as he swims by, “Hey boys, how’s the water?”  The young fish responds, “fine” and keeps swimming.  Not long after, one of the young fish says to the other, “what’s water?”

The Sabian Symbol for Neptune at the time of the opposition is 18 Pisces, “a gigantic tent”. Jones says, “this is a symbol of the completeness with which man is able to see his experience both steadily and whole, dramatized here by the circus as representing an utterly naïve intensification of self-consciousness”. The keyword is APPORTIONMENT (distribution).  Further, he says, “When positive, the degree is a genius for organizing divergent capabilities in a common cause, and when negative, delusions of grandeur and unamusing bombast” (Jones, The Sabian Symbols, 317).

The opposition aspect seeks to balance energies that are in opposite signs; the points and signs involved need to harmonize to get the full value of the aspect.  During the period of this opposition, the point involving desire and action and the point involving surrender and faith must find a balance, creating collaborative energy between Virgo control and Neptune surrender.  This opposition will “favor” Neptune because it is in the sign of its rulership.

The very problematic nature of this aspect, with these points, will come from the fact that Mars wants to have almost micro-managing control while in Virgo and Neptune is going to reveal how impossible that really is.  At best, Mars can lead us to act in a way that helps us be ready for Neptune’s overwhelming spiritual flood.  It can feel like wearing only a life vest when a giant wave (Neptune in Pisces) roles over you; but if the vest is well made and you intend to fight for your life (Mars), you will be able to find yourself still alive and able to keep swimming for shore thanks to that (Virgo) life vest.

The balance to strike is accepting and seeing the waves coming for you, knowing that you will be thrown, for a time, into surrender; but, with the work of Mars and a good sense of when to take action, you can learn the rhythm that is the balance you need to keep making progress (Mars) while also dealing with tremendous unknowns (Neptune).  Put another way, make sure you are saving in case a recession happens.  Neptune can wash away even the most enduring structures and systems.