Kamala Harris and the US Chart

Home » Blog » Astrology » Kamala Harris and the US Chart 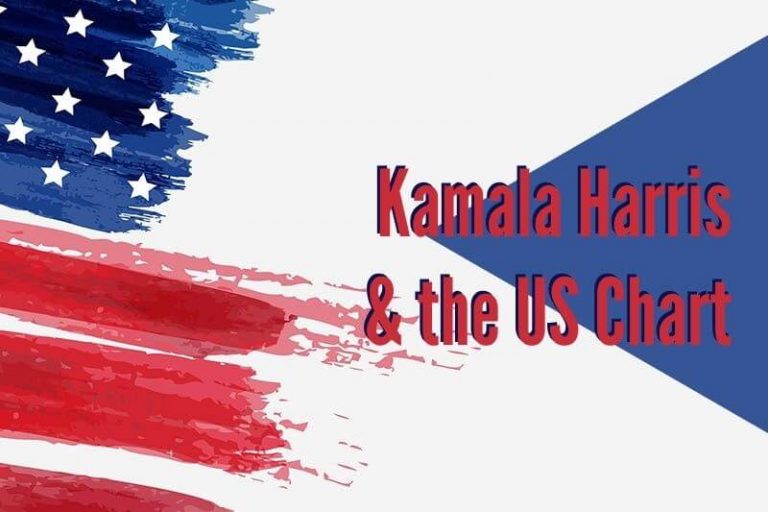 For most of astrology’s history charts were cast for leaders of countries and the wealthiest members of society.  Astrology for anyone and everyone is a relatively new and still developing branch of astrology. This article will “harken back to the old days” and consider the chart of Kamala Harris, currently the Vice President-Elect for the United States, in synastry with (in relation to) the Sibly chart cast for the birth of the United States.

The Leader and the Nation Intertwined

When looking at two charts and how they relate to one another, there are several technical considerations to explore to get an interpretation that will say something meaningful about the dynamic between a leader and his or her nation.

A conjunction between two points occurs when the points are in the same sign and near the same degree as one another.  When this happens these energies merge.  There is very significant conjunction that will happen on December 21st, 2020.  On that day Jupiter, the point associated with expansion and exploration, will conjunct (merge with) Saturn, the point associated with rules and responsibilities, in the sign of Aquarius at 0 degrees and 29 minutes.

An entire chapter in a book could be written about this conjunction, but for the sake of this article, I will attempt to distill the meaning into a single, pithy sentence.  A new vision of growth will be defined by the needs of society, requiring a break from the old ways of thinking that have contributed to current problems in families, communities, nations, and the world.

As we look at Kamala Harris’ chart in relation to the US chart, we will look for conjunct points between the two as a starting point to discuss what the meaningful relationship looks like between these two entities.

Approaching/Separating Energy and Orbs of Influence

Because an astrology chart is a snapshot of a motion picture, points are either approaching one another or separating from one another.  As the names imply, energy that is approaching is building, while energy that is separating is diminishing.  When the point of one chart is degrees or minutes “before” the aspecting energy of another point, that energy is intensifying between the two charts and will be very significant.

The Orb of Influence describes how close two points are, regardless of whether or not they are approaching or separating.  As you can surmise, the closer the degrees and minutes the stronger the influence.  Not only is the Orb of Influence important, but so is the nature and strength of the points.  The luminaries, the Sun, and the Moon have a wider influence than Neptune or Pluto.  We would consider Pluto within 5 degrees of the Sun sharing influence, but Pluto within 5 degrees of Neptune would not.

With these technical ideas in mind, let us look at the chart of Kamala Harris and the United States, pictured below:

It would be a toss-up between Harris’ Sun/Moon square the US Pluto and her Saturn conjunct the US Moon.  I will give the top spot to the Saturn/Moon combination because the Orb of Influence is close and the aspect is approaching, rather than separating (which they are doing with the Sun and Moon/Pluto square).  Saturn constrains, defines, and structures.  In Aquarius, the energy is focused on community and how to manage the rules (Harris has been a prosecutor after all).

In traditional astrology, Saturn ruled Aquarius before the discovery of Uranus.  It is interesting that the point that “took over” as the ruler is radically different than the point that originally ruled the sign.  In this more traditional placement, there is more interest in following the rules than expressing freedom, which is what you get with the Uranus rulership.  The Soul of America (its Moon) is concerned with society and freedom within that society.  Harris will firmly believe that rules, especially wise ones, will offer more freedom than anarchy.

As the first female Vice President and the most likely candidate to be the first female President (even now), she will bring to bear a challenge to the long-standing power structure of the US.  It makes sense that she enters this opportunity as the second to Joe Biden (the separating dynamic) rather than as the primary candidate.  Her mere gender in the role of VP will create disruption without any effort on her part.  And, from a Soul Purpose perspective, she is not here to be anyone’s second (Aries Moon).

While her Saturn is offering structure and limits to the US Moon, her Sun is really here to help.  The US is rather far behind the curve in terms of female leadership when compared with other parts of the world (namely New Zealand and Germany, currently) and even times in history (queens in other societies).  But this combination should help her make the most of this opportunity, as has likely been the case throughout her life.  After all, this alignment has been present for her since birth.

Her Sun also resides in the 11th House of Community in the US chart, which is the house Aquarius rules.  So, her Sun is basically connecting the US Moon with its natural house rulership.  Also, her Sun looks to Venus, which is in Cancer in the US chart.  There is a strong pattern of energy between the US Moon and Venus and the Sun of Kamala Harris.

Since Kamala Harris was born at the Full Moon and her Sun trines the US Moon, her Moon will sextile the US Moon.  This energy adds more positive flowing energy from her to the US chart and back to her.  There is a significant opportunity for mutual support from her leadership to the country and from the country to her leadership.