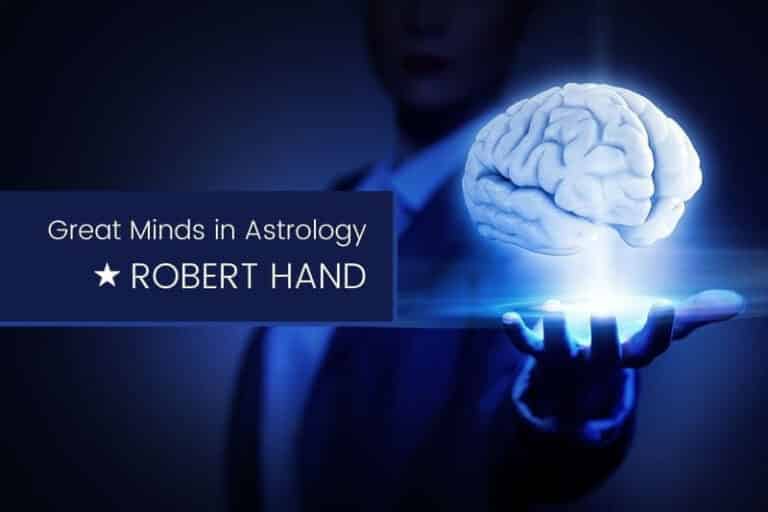 This article will distill a thinker’s essential and many contributions, and provide a book list of their key works.  As with any thinkers who write extensively, some books stand out more than others, and these will be identified.  Some works have practical applications and others are theoretical, depending on whether or not you wish to practice astrology or study it.

This article will talk about Robert Hand.

Robert Hand is a contemporary astrologer who published his first book – Planets in Composite: Analyzing Human Relationships – in 1975.  Since then, he has published six other books:

His wiki page offers this summation of his career:

Hand began writing programs for microcomputers in 1977 with a desire to bring the benefits of fast and accurate calculations to the practice of astrology. Out of this effort, he founded Astro-Graphics Services in 1980 which later become Astrolabe, Inc.

Hand founded Arhat Media in 1997. Arhat, which is an acronym for “Archive for the Retrieval of Historical Astrological Texts”, procures, protects, and publishes translations of historical astrological works and secondary source material for serious astrologers and scholars.

Some of this material has been integrated into the Robert Hand Library, which now houses the original texts and translations of most of the ancient and medieval astrologers, as well as the history of science, philosophy, and mystical Judaism.

His first four books are must-haves for any astrology library.  Even though they were written over 40 years ago, they will prove invaluable to your study and practice of astrology.  Hand is an especially talented writer and exceptional scholar, so the material in each book holds up over time.

Robert Hand is one of the most thorough writers about astrology, which makes owning his books necessary.  Without a doubt, his first book, on Composite charts (or combined natal charts), written in 1975, is still one of the best books on the subject.

One caveat of astrology books written in the first half of the 20th Century and earlier is the limits that appear because the content is trapped in the cultural paradigm of that time, relying too heavily on assumptions that failed to translate into new eras of expanding knowledge and information.

You can see this problem in the works of C. E. O Carter and Alan Leo.  As a result, modern readers must “read through” the cultural bias constantly.  Not so with Hand, he is careful to avoid the 1970s and 1980s era thinking that would trap his ideas in the era.

I still use his Composite book regularly when working with any relationship chart assessments, be they friendships, family members, or romantic partners.

Planets in Composite contains an explanation of the composite technique, chapters on casting and reading the horoscope, five case studies illustrating the use and validity of composite charts, plus twelve chapters of delineations.

There are delineations for all the planets (including Sun and Moon) in each house and every major aspect (conjunction, sextile, square, trine, opposition). 374 interpretations in all, 300 words each, thumb-indexed for easy reference. And there are 41 delineations of the Moon’s nodes as well.

His second book tackles transits.  If there is a book that would be considered a “bible” in astrology, this would be the book.

Without a doubt, this book remains the most comprehensive text on transits and no one has attempted to duplicate the level of detail Hand provides for every transit.  If you are serious about studying astrology and do not have this book already, you should order a copy immediately!

Parents need all the help they can get and this book offers some very useful insights regarding the energy influence of the Solar System at the time of birth, represented by the natal birth chart.  A newborn is a mix of potential and design.  Seeing the fully rendered birth chart reminds us that we all start out with a design that we grow into over the course of our lives.

To Robert Hand, children are adults in the process of becoming. Parents will welcome this book and use it to help their children learn to cope with the complexities of modern life. Readers of all ages will use it to understand their own patterns of early development. The first four chapters define the roles of mother and father, explain the effects of various planetary energy systems, and discuss the meaning of elements and crosses in a child’s chart.

Hand analyzes the charts of three children, including Judy Garland and Shirley Temple, to illustrate the astrological principles and psychological insights set forth in his intriguing study of personality development. The major part of the book consists of delineations of horoscope factors, written with young people in mind. Every planet in every sign, house, and major aspect, as well as every rising sign, is interpreted in about three hundred words that stress possibilities rather than certainties.

This book is probably best described as a “scholarly” beginner’s book.  It assumes the reader is intelligent, determined, and aware.  This is not an “astrology made easy” or “astrology for dummies” type of introductory book.

Whether you’re a beginning student or a practicing professional, Horoscope Symbols takes you beyond your present conception of astrology into a whole new realm of understanding. Horoscope Symbols takes the beginner beyond cookbook interpretations to genuine insight, beyond superficial keywords to the fundamental principles that underlie astrology, beyond overemphasis on signs to the primacy of planets and angles.

Although Hand assumes little prior knowledge of astrology, the more you know, the more you will get out of this book. Hand takes the expert beyond the fatalism of tradition to a deep understanding of the role of personal choice in the life of the individual, beyond fortune telling to the true source of human experience.

I strongly recommend you get all his books; you will not be disappointed.