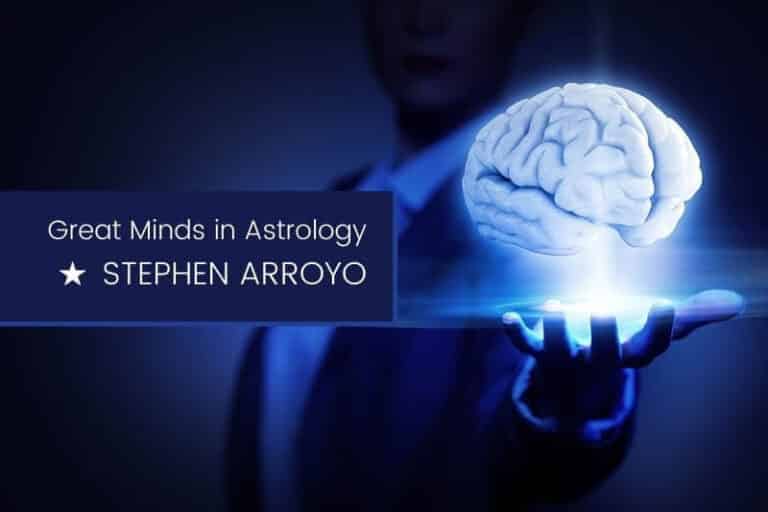 This article will distill a thinker’s essential and many contributions and provide a book list of their key works.  As with any thinkers who write extensively, some books stand out more than others, and these will be identified.  Some works have practical application and others are theoretical, depending on whether or not you wish to practice astrology or just study it.

This article will talk about Stephen Arroyo.

Stephen Arroyo is a contemporary astrologer who published his first book, Astrology, Psychology & the Four Elements: An Energy Approach to Astrology & Its Use in the Counseling Arts, in 1975.  Since then, he has published nine other books:

Spearheaded by the work of Dane Rudhyar, who merged Jungian psychology with astrology, Stephen Arroyo and Liz Greene helped establish the movement with their work in the 1970s and 1980s.  Arroyo also added texture with books on astrology and karma and astrology and reincarnation.  The principal shift with astropsychology or psychological astrology was away from the deterministic approach of medieval astrology to a more humanistic and spiritual approach.

According to the wiki page on psychological astrology:

One of the first astrologers to combine Jungian psychology with astrology was Dane Rudhyar and his protégé, Alexander Ruperti. Rudhyar termed it “humanistic astrology,” the subject of his monumental volume, The Astrology of Personality, published in 1936. Psychological astrology, however, became firmly established in the late 20th century with the books and lectures of Liz Greene and Stephen Arroyo who were both strongly influenced by the Jungian model. (https://en.wikipedia.org/wiki/Psychological_astrology)

In my own personal journey as a professional astrologer, Stephen Arroyo’s work has been one of the most influential thinkers to impact my early practice.  After reading his book “Astrology, Psychology, and the Four Elements: An Energy Approach to Astrology and Its Use in the Counseling Arts”, I began to imagine how I would practice astrology professionally and to develop my interpretation techniques with professional services in mind.

This book relates astrology to modern psychology and explains the use of astrology as a practical method of understanding one’s attunement to universal forces. It clearly shows how to approach astrology with a real understanding of the energies involved, and it includes practical instruction in the interpretation of astrological factors with more depth than is commonly found in astrological textbooks. It was awarded the Astrology Prize by the British Astrological Association.

The Books to Read and In What Order

I highly recommend you get at least his foundational books and read them.  All the books can be grouped into three categories:

The Profession of Astrology

Arroyo is an excellent writer and complex thinker.  Even though two of his best works were written in 1975 and 1978, they still work as essential reading if you want to dig in deep into astrology, whether you want to be a professional or not.  I found his books on astrology and karma very personally enlightening.  And his most recent book is, according to Amazon reviewer Ed King, a true gem:

In this compact eBook, Stephen Arroyo continues and expands on his efforts to create a type of astrology that is modern, practical, and psychologically penetrating. In fact, it is one of the few books in which even the Introduction contains meaningful and original insights that set the reader thinking and reconsidering prior assumptions. For example, in his explanation of the importance of each planet’s relative speed, he sets forth such a simple, revealing guideline for interpretation of primary astrological factors that one might be tempted to hit one’s own forehead and exclaim, “Of course! Why haven’t I seen that!?”

If you decide to get and read all his works, you will not be disappointed.