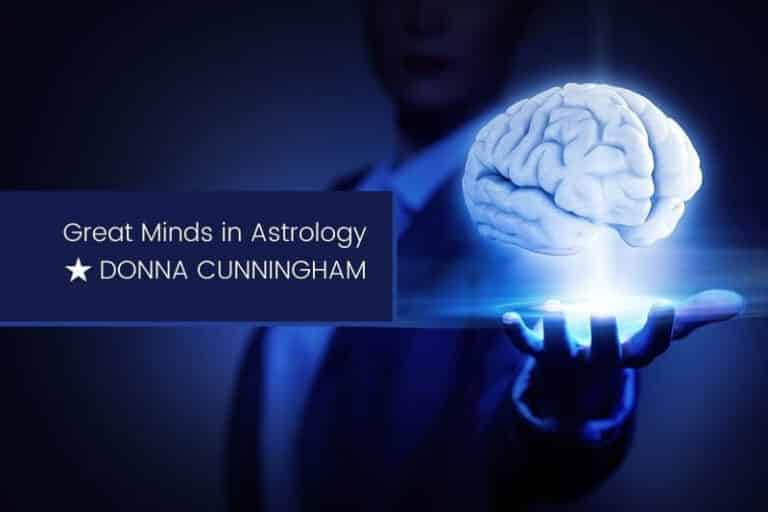 Welcome to a series about the Great Minds in Astrology. These posts will look at the key thinkers and practitioners in the field of astrology, from ancient to contemporary times. Numerous men and women have made significant contributions to astrology. These Great Minds provide a large bibliography of writings worth reading and putting into your own astrology library.

This article will distill a thinker’s essential and many contributions and provide a book list of their key works. As with any thinkers who write extensively, some books stand out more than others, and these will be identified. Some works have practical application and others are theoretical, depending on whether or not you wish to practice astrology or just study it.

This article will talk about Donna Cunningham.

Donna Cunningham was born on July 5th, 1942, at 7:40 AM, in Onawa, Iowa. She passed away on July 5th, 2017 (her 75th birthday). She was an American social worker, licensed in New York and California. She wrote eight books, thereof which were updated and republished during the course of her life.

From her Astro Wiki page:

Beginning her studies in 1968, Donna’s main teacher was Richard Idemon, who embodied the blend of psychology and astrology she was drawn to. She was certified as a professional astrologer by both the American Federation of Astrologers and Professional Astrologers Incorporated in 1983 and as an Astro*Carto*Graphy practitioner by Jim Lewis in 1984.

She began doing insight-oriented astrology consultations in 1970, started teaching in 1971, and, from 1974 onward, was invited to speak at national and international conferences. She wrote Dell Horoscope’s advice column, “Astrology at Work”, for twenty years, and regularly contributed columns to The Mountain Astrologer, and other magazines.

She belonged to the National Council for GeoCosmic Research since it began in the early 1970s. She joined AFAN (“Association for Astrological Networking”) at its inception and served as an AFAN advisor. She also was on the board of the Oregon Astrological Association for several years.

Her four most prominent books would make excellent additions to your astrology library. As a professional astrologer, I have found each one useful when learning astrology, and as reference material when working on new charts. The Consulting Astrologer’s Guidebook was especially useful when I was starting my professional practice. We all need a starting point, and this book is an excellent primer for learning how to read charts.

An excellent book for someone interested in becoming a professional astrologer, this work is one that will help you understand how to deliver a consultation and how to shape the work to match your astrological design. Cunningham helps the reader understand the common traps novice readers fall into and helps you avoid them.

She points out how important it is to engage the client and avoid trying to “wow” them with deterministic prognostications. And, as a practicing social work, she helps practitioners understand the importance of guiding clients to other forms of help, especially psychological or psychiatric kinds if certain problems show up in a session.

Certainly, the second book to purchase and add to your collection is this one. If you decide to only get two of Cunningham’s books; these are the two purchase and read.

From the Introduction of the 1996 version:

We are all lunar types to some degree because the Moon is a major force in everyone’s horoscope. The Moon symbolizes our emotional side, dependency, and security, our need for home and roots, and our ties to our mothers. These are normal human needs but the world teaches us that these things are bad, that we must be independent, non-emotional, and accomplishment-oriented. This book will explore conflicts in these lunar areas along with the consequences of suppressing our lunar needs. Suggestions will be offered on how to reconnect with the Moon.

This book focuses on Pluto, Scorpio, and the 8th House. Perhaps one of the best books to address the harsh realities of chart difficulties, especially those involving Pluto, which rules such matters as “birth, sex, death, power, and transformation.”

From the Chapter One, Understanding Pluto in Your Chart:

The planet Pluto is naturally connected with the sign Scorpio and with the eighth house. These three categories have some common interest in such matters as birth, sex, death, power, and transformation. Power and how to deal with it is a major Plutonian issue, both at the individual level and for humanity.

From the introduction of the book:

This is the first book in recent years for the general reader that deals with the astrological and psychological nature of the Moon. Most popular astrology books are about your Sun sign, and while that’s a strong and valid part of you, the Moon is equally important. The Moon sign is the missing dimension in Sun sign astrology, a reason why some people swear astrology doesn’t work. They read descriptions of their Sun sign and say, “I’m not like that.” Others, more favorably admit it works for certain people, yet have to stretch to make it fit themselves.

I strongly recommend you get all her books; you will not be disappointed.

Are Air Signs the Least Emotional?