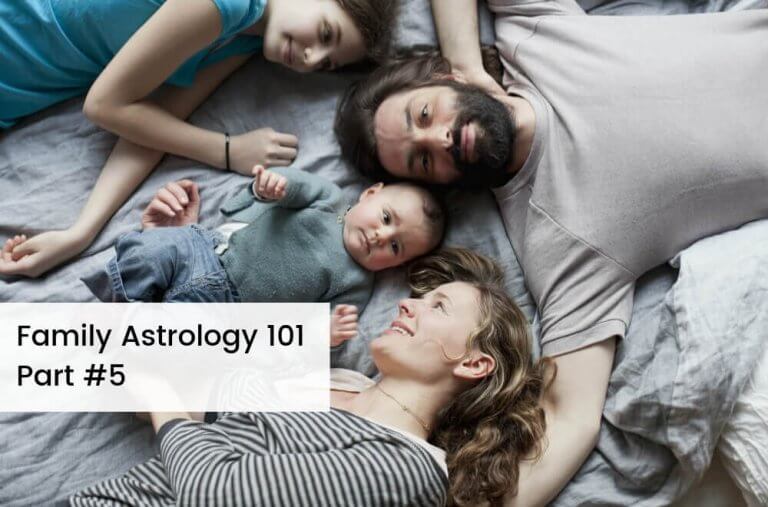 *A quick note, the previous article mentioned looking at Venus to Venus, that article will be written after this one.  This article looks at the Ascendants instead.

This article will look more in-depth at the parent/child charts presented in the previous articles and shown here below. We will now look at how the Ascendant (AS) energies of the two charts are most likely to interact, and what the parent and child will need to do to make interaction successful and positive. 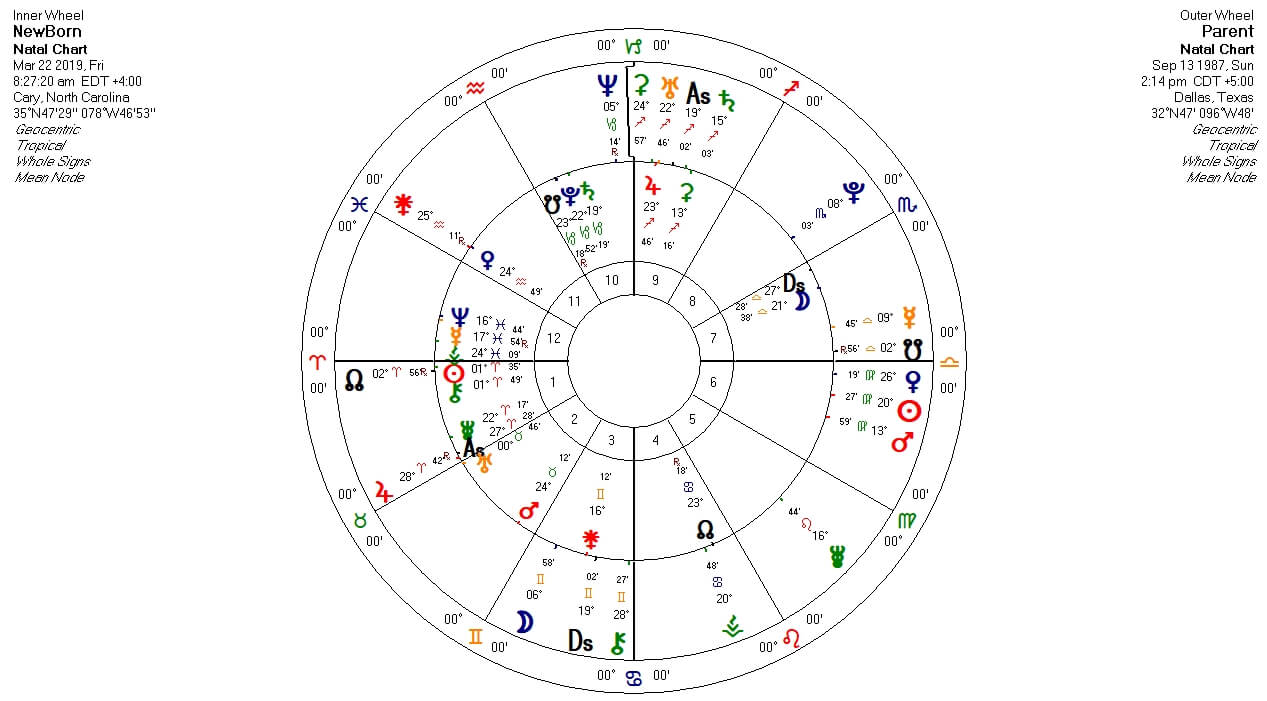 The inner circle is the child’s chart and the outer circle is the parent’s chart.  The parent’s chart “applies” to the child’s chart in certain ways.  In the case of this example, the parent has a Sagittarius Ascendant, represented by the letters AS in the 9th pie segment (or House) of the child’s chart.  Notably, the child has two points in this house, Ceres (what we need for nourishment) and Jupiter (what we need to expand and develop our beliefs). The child has an Aries Ascendant (the Ascendant angle marks the sign of the 1st House of Identity, always).

Both individuals have fire ascendants, which means, subsequently, all their house energies are the same element (2nd House is earth, 3rd is air, and so on).  The Ascendant marks how a person presents and is perceived in the world.  The Sagittarius Ascendant individual gains identity development through exploration out in the world; a title for this Ascendant is the “Missionary”.  The Aries Ascendant individual gains identity through selfishness, putting the self-first and learning what happens through natural consequences. A title for this Ascendant is the “Maverick”.

These Ascendants trine by sign, but not by degree, being outside the range for the orb of influence to be noticeable. Still, they will both seek to learn about themselves through “fiery” energy and through “action”.  Neither will be very afraid to try new things and both will certainly be up for adventures. This is a parent/child combination that could easily enjoy traveling together, playing a sport together, or actively playing together.

The parent leads the parent/child dynamics; the parent is the one responsible for directing and processing the energy of the child’s chart, especially at the earliest stages of the developing child, but also until the child develops true self-sufficiency (i.e., becomes a full adult in a complete way – meaning a productive member of society).  Hence, the child will need to learn how to develop a healthy identity from the parent’s guidance.

In the very specific case of these two charts, the parent’s Ascendant functions as an authority role model even more than normal since it resides in the child’s 9th House of Mastership.  Additionally, the child’s Jupiter is the final dispositor of the chart, meaning that is in its own sign of rulership, and even in its natural domicile.  To have a parent who learns about identity through Sagittarian behavior can be a true asset if the parent has been able to develop his or her adventuring spirit fully.

This child will also feel nourished (Ceres) when he or she can develop a robust philosophy and understanding of the world while being encouraged to find his or her own sense of mastership (9th House). At a young age it would do the child a lot of good for the parent to give him or her access to as many different experiences as possible; and once one “sticks”, go as far into it as possible, developing the child toward professional or expert knowledge/skill. 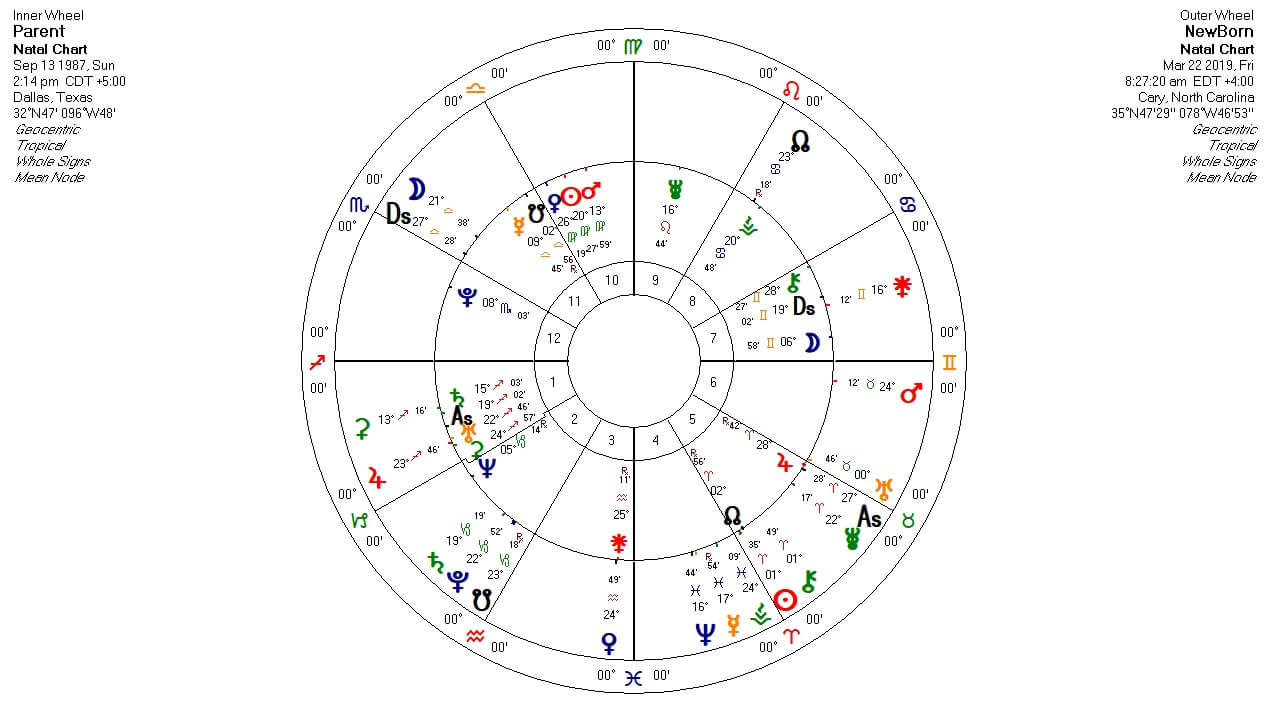 Now, let’s look at the reverse of the two charts; and consider the child’s chart influence on the parent’s chart.  As it turns out the child’s Ascendant influences the 5th House of Creativity for the parent and is also applying to the House that contains Jupiter. Such doubling (parent Ascendant in the same sign as child’s Jupiter and child’s Ascendant in the same sign as the parent’s Jupiter) is significant because they will both expand each other; and as they expand, they will both help each other’s identity grow.

This parent-child relationship is very karmic in this lifetime. Digging further and further into the chart shows powerful energetic connections that will make this relationship very intense. If we look at the larger schema of both charts in relation to one another, we can see numerous points that align directly, just look for points that “line up”.  From an energy standpoint, these alignments create “binding” energy that bond the parent and child, energetically speaking.

It is important to remember not to be tempted to into thinking that strong binding is “naturally good”.  Depending on how the souls decide to use the charts they selected, this binding energy can express as “I can never seem to escape this person” and I really do not like who they are, or “we are just great together”.  In the next article, we will look at the parent/child Venus to Venus relationship and see how they are likely to communicate with one another.

Test the Advantages and Benefits of Reiki