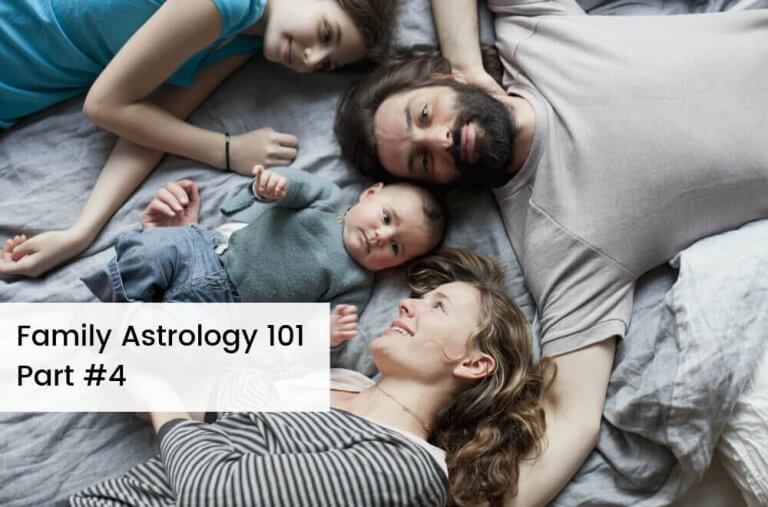 This article will look more in-depth at the parent/child charts presented in the previous articles and shown here below. We will now look at how the Mercury (Communication) energies of the two charts are most likely to interact and what the parent and child will need to do to make interaction successful and positive. 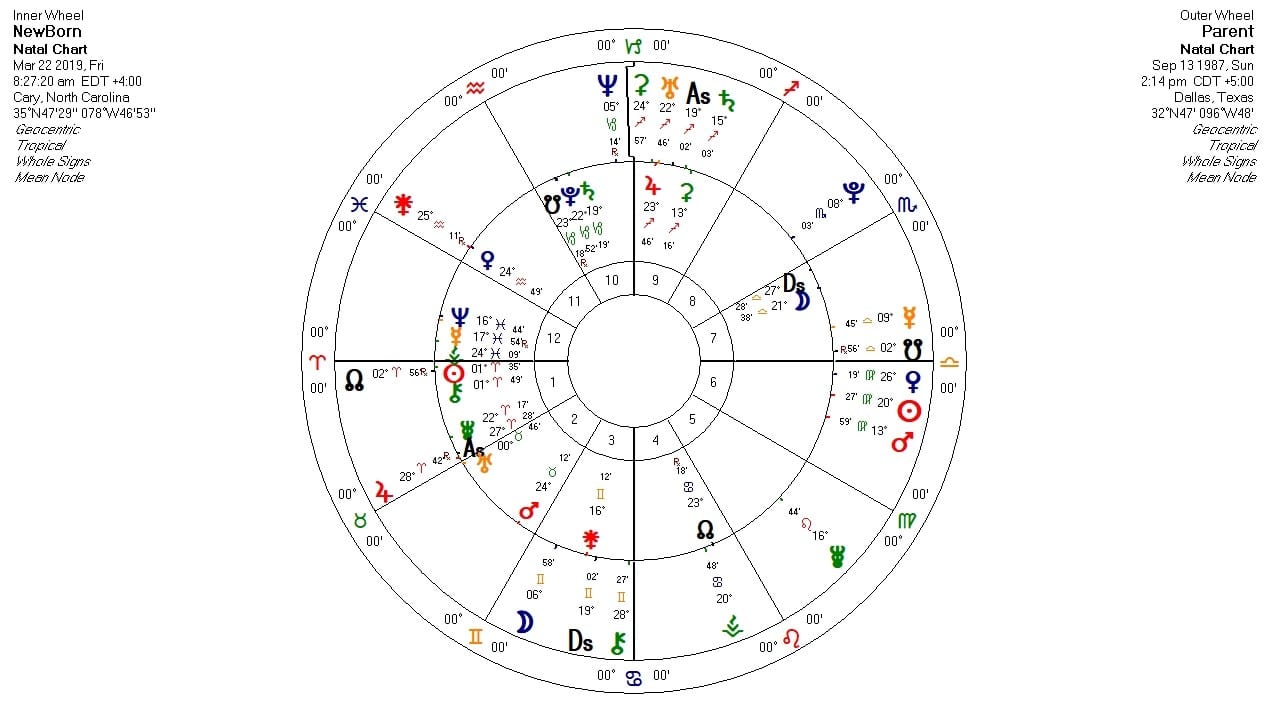 The inner circle is the child’s chart and the outer circle is the parent’s chart.  The parent’s chart “applies” to the child’s chart in certain ways.  In the case of this example, the parent has a Libra Mercury, represented by the female symbol with two tips on the top of the circle in the 7th pie segment (or House) of the child’s chart.  Notably, the child has one point in this house, the Moon, which represents the Soul Path and how the child gives and receives love. The two points share the same house but are not close enough together to be considered conjunct. The child has a Pisces Mercury in his/her 12th House of Spirituality.

A person with a Libra Mercury (the parent) and a person with a Pisces Mercury (the child) have fundamentally different energy signatures that are, by the nature of the energy, “incongruent”.  One is in an air sign (the parent) and one is a water sign (the child).  At the core of Libra is relating, while the core of Pisces is dreaming.  By design, this child chose, spiritually speaking, a communication style that is imaginative and sensitive to emotions (internally and externally), while the parent chose a communication style focused on relating and logically figuring out the needs of others.

While these energies are in different elements, they are not really “at odds”. The child, with this Mercury, can easily get lost in daydreams and may prove to be especially sensitive to the feelings of people around him or her, so the parent may have to vigilant to help the child manage his or her own emotions while teaching the child how to erect boundaries when dealing with other people’s emotions, especially while young and interacting with peers.

Mercury is an air/earth point (ruling both Gemini and Virgo) that is in an air sign and house for the parent and water sign and house for the child.  The parent’s Mercury occupies his/her 11th House of Community, and the child’s Mercury occupies the 12th House of Spirituality.  The parent’s Mercury is in a particularly strong placement and can offer the child a wealth of knowledge about the community and how to relate to others.  The child will likely have a tremendous imagination that the parent can enjoy and support.

And here is the most significant point of parent/child dynamics; the parent is the one responsible for directing and processing the energy, especially at the earliest stages of the developing child, but also until the child develops true self-sufficiency (i.e., becomes a full adult in a complete way – meaning a productive member of society).  Hence, the child will need to learn how to identify healthy relating to the parent’s guidance.  The parent will do well to learn from his/her lessons in relating (Libra) about successful communication with others to help the child at different stages of emotional development.

In the very specific case of these two charts, the parent’s Mercury “teaches” the area of the child’s chart that has to do with relating one-on-one with others (7th House), and this parent will have a lot to teach this child because the child’s Moon is here.  This is a very helpful placement, which also reinforces a potentially profound connection between this parent and child. 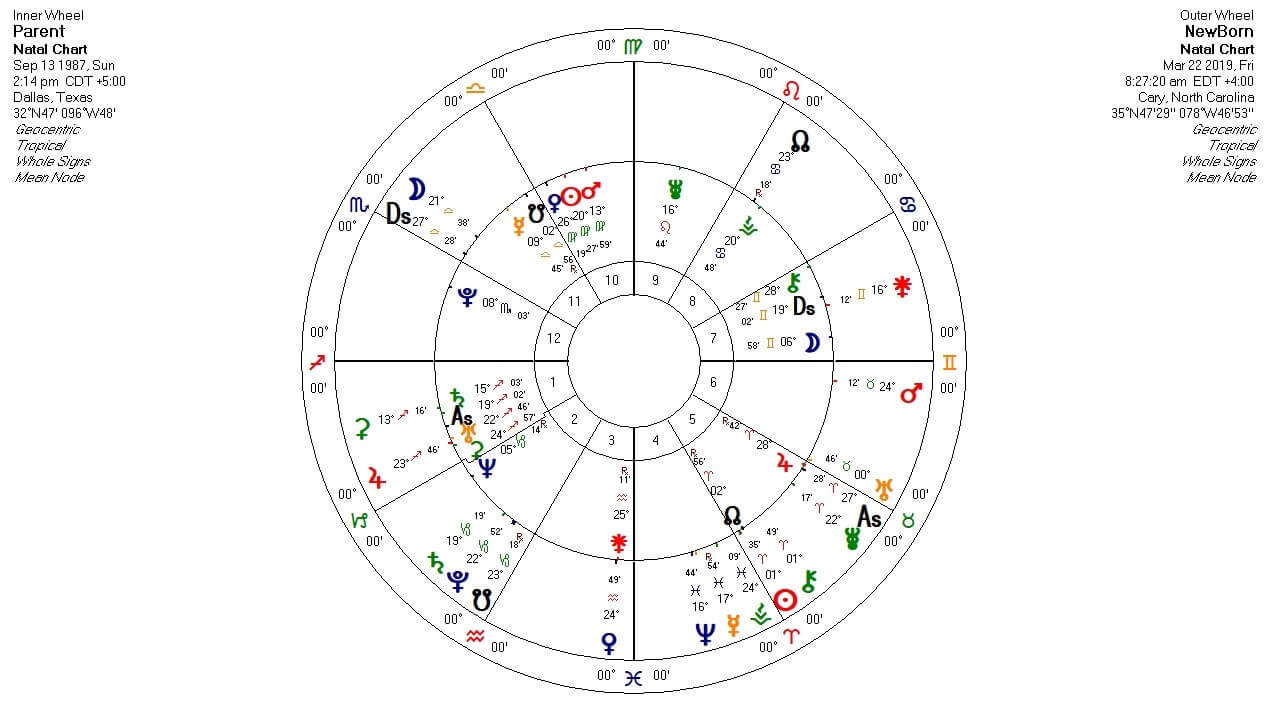 Now, let’s look at the reverse of the two charts; and consider the child’s chart influence on the parent’s chart.  The child’s Mercury “teaches” the parent’s 4th House of Family.  It is very likely that this child will touch the spiritual feelings the parent has about family and help the parent express his or her own imagination.   With Mercury in the most private House, which also happens to be a House that is empty for the parent, the child’s influence will be rather profound.

If we look at the larger schema of both charts in relation to one another, we can see numerous points that align directly, just look for points that “line up”.  From an energy standpoint, these alignments create “binding” energy that bond the parent and child energetically speaking.  But once again, do not be tempted to think that strong binding is “naturally good”.  Depending on how the souls decide to use the charts they selected, this binding energy can express as “I can never seem to escape this person” and I really do not like who they are or “we are just great together”.  In the next article, we will look at the parent/child Venus to Venus relationship and see how they are likely to communicate with one another.