The Different Artistic Representations of the Chariot Card throughout times 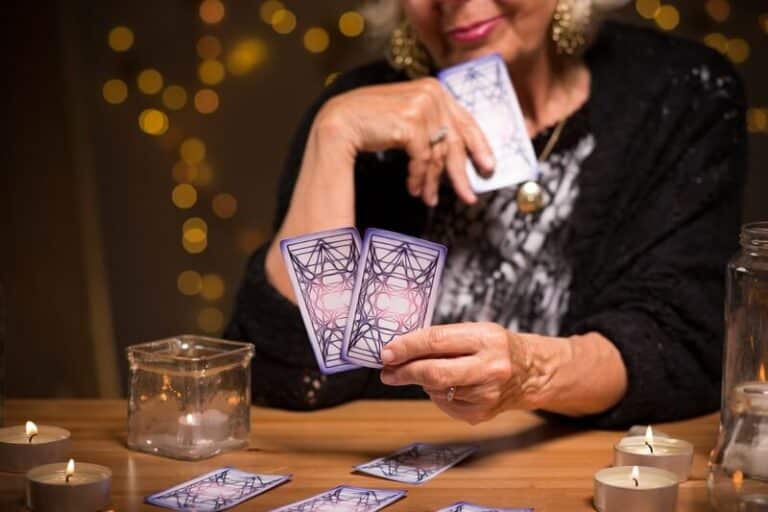 The first tarot cards were hand painted and put to print using wood blocks in the middle of the 15th century. New decks were few and far between from the 15th to the 20th century. Even with the printing of the most popular and best-known Rider Waite deck in 1909, tarot decks did not start to be printed in large numbers until the later part of the 20th century.

By the start of the 21st century, deck printing rapidly expanded. If you do a current search on Amazon or eBay for “tarot cards”, you will get results well over 5,000 on Amazon and over 10,000 on eBay. More and more new decks come out every month. This article will look at the various artistic representations for the Chariot card over the history of the tarot.

This article is meant to be a visual feast of card examples, more than a history lesson. Changes in artistic style and printing show up clearly from one time period to another.

The earliest decks were hand painted and printed using the woodblock technique to produce multiple copies.

The Visconti-Sforza tarot is the name assigned to roughly 15 decks printed in the middle of the 15th century. No complete deck exists, but examples from the different decks can be found in various museums, libraries, and private collections around the world.

The Chariot card shows a prince riding into battle or returning from victory. He protects civilization. 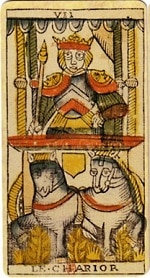 In 1909, we get the first modern printing deck, with much more vibrant colors and a more nuanced artistic technique. In this version, the Chariot resembles the Marseilles image, but in this case, it is clear that he is the defender of the city. 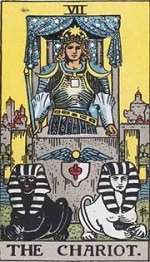 The deck was developed between 1938 and 1943, but did not get published until 1969, after the creator, Aleister Crowley, and artist, Freida Harris had both died. Crowley and Harris added a great deal more symbolism to the card. 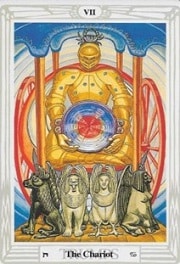 Based on Greek mythology, this version of the Chariot is represented by Ares, God of War. He guides two horses, one black and one white, that are pulling in different directions. His strength and will marshals their energy to take him into battle. Below is the 1986 and 2009 versions of the card. 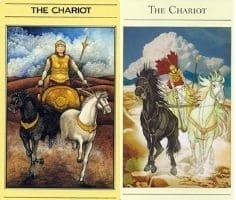 This creator and artist made one of the first decks to introduce a truly modern art style, as well as including three additional icons from three other systems of thought and divination: Hebrew letters (upper left corner), runes (upper right corner), and astrology (bottom right corner). Hexagrams from the I-Ching appear on other cards in the deck. 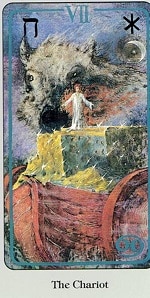 This deck keeps the 78-card structure, but renames nearly all the Major Arcana cards. This card has been changed to Awareness, where the authentic self is shown burning through the shadow self. 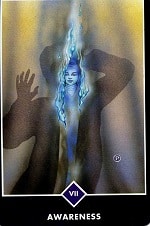 Using a watercolor and impressionistic art style, the Chariot card still uses the two horses to represent the card’s energy, with a single figure between, as the charioteer. 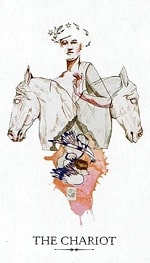 And finally, a blend of hand-drawn artwork enhanced by computer design is what you get in the Ostara Tarot. Here the horses are represented as two chess pieces on a chess board, with a hooded charioteer holding reins as if he is “riding the board.” 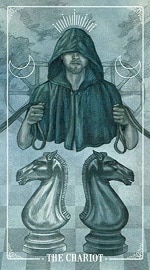 Just a final look comparing the cards over time. 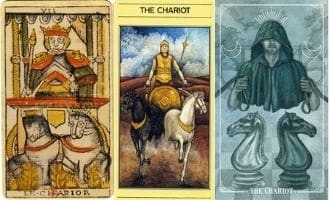