Home » Blog » Astrology » Day or Night Birth? Why It Matters

In classical, Hellenistic astrology the first distinction made for any chart was “by sect”, meaning that the chart was either a diurnal (day) chart or a nocturnal (night) chart.  Being born during the day or night acted as the first content for the interpretation of a chart.  This article will look at the meaning and difference between having a day or night chart.

A Brief History of Astrology

Human consciousness is a strange part of existence when you look at life around you, whether you observe your immediate surroundings or consider the vastness of the universe. Everything else operates in a functional or utilitarian way.  Humans are living beings who make meaning, seek a purpose, and can choose to act against their own best interests.  Life is not just functional; we want and need it to be meaningful.

In our search for meaning, we have delved into our inner space (psychology, dream interpretation, meditation, and religion) and looked at outer space (science and astronomy).  Part of the history of astrology includes the early period when astronomy and astrology were intertwined professionally, before the age of enlightenment.  The great astronomers were also invested in the meaningful interpretation of the stars and planets as guides and clues to the meanings of human affairs. They were also astrologers.

Early in the history of astrology, most of the work was for royalty and as a service to the nation.  Everyday access to astrology, as we experience it today, was unheard of for most of human history.  It was not really until the introduction of psychology at the turn of the 19th Century that astrology evolved into the daily tool and personal, individual tool we are so familiar with now.

The psychology of the individual, championed by Sigmund Freud (1856-1939) and Carl Jung (1875-1961), created a new opportunity for astrology to become more invested in the personal and daily life of people. Alan Leo (1860-1917) and C. E. O. Carter (1887-1968) were contemporaries of Freud and Jung who both wrote extensively on the subject of astrology and successfully published books into the mainstream.

Prior to the advent and arrival of the personal computer, astrology charts were cast “by hand” and took considerable time to produce and interpret.  Regardless, you needed three pieces of information to cast a chart: the date of birth, the location of birth, and the time of birth.  You could and can cast a chart without a birth time, but it significantly limits the interpretive power of the chart, which is why astrologers use a technique called “rectification” to attempt to find a birth time when there is not one given or available.

The Importance of the Time of Birth

Humans operate within and outside of the natural rhythms of life.  We are able to eat foods out of season because we have constructed commerce and trade solutions that allow us to get a tropical fruit into a location where the food would never grow.  We have technology that lets us regulate our living space such that we can keep our immediate climate comfortable when the weather is extremely hot or cold.  Good or bad, we shape the world to suit us in so many ways, eschewing many of the natural rhythms our ancestors once had to “deal with” and more fully understood.

One of the most fundamental rhythms of life is the cycle of day and night.  There are creatures that are active only during the day and others that are active only at night.  We humans, historically, have been creatures of the day, even after the discovery of fire, breaking into the night in very limited quantities and ways.  But with the discovery of electricity and the invention of the light bulb, we are able to turn night into day. 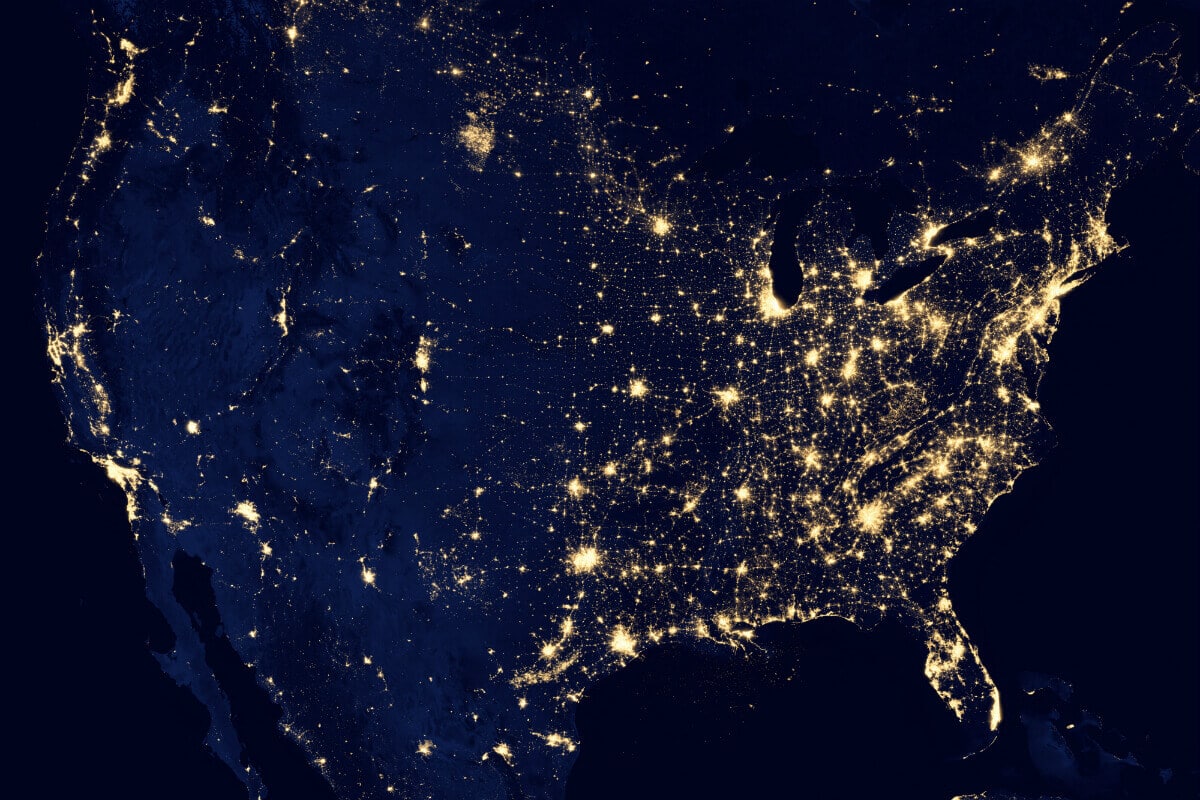 Still, we remain connected to the natural rhythms of our existence and often describe ourselves as a “morning person” or not a morning person, as someone who “gets his or her best work done at night”. Most of us know the time of day when we are “at our best” and when we find our energy lacking or sluggish. There is a good chance your astrology chart can tell you why you are a morning person or an evening person, someone who loves to be where the summers are hottest and longest and where the winters are coldest and longest.

An astrology chart has numerous pieces of information that appear in the image that makes up a cast chart.  You have 12 segments conveniently numbered 1 to 12 going counterclockwise from the left side of the chart.  Special icons represent astronomical bodies and calculated points that make up the data of the solar system when you were born.  There are also 4 angles noted with letters: the Ascendant (AS), Descendant (DS), Medium Coeli (MC), and Imum Coeli (IC).  The AS and DS oppose one another and the MC and IC oppose one another.

The angles of interest in this article are the AS and DS because the line that connects them is the horizon line on the day of birth.  The Sun is represented as a circle with a dot in the middle.  If the symbol for the Sun is above the AS/DS line, then the person was born during the day, and if it is below the horizon the person was born at night.  Below is my chart with only the AS/DS and Sun symbol.  If I only showed you the chart without any of birth information, you would know I was born at night because of the position of the Sun in the chart. 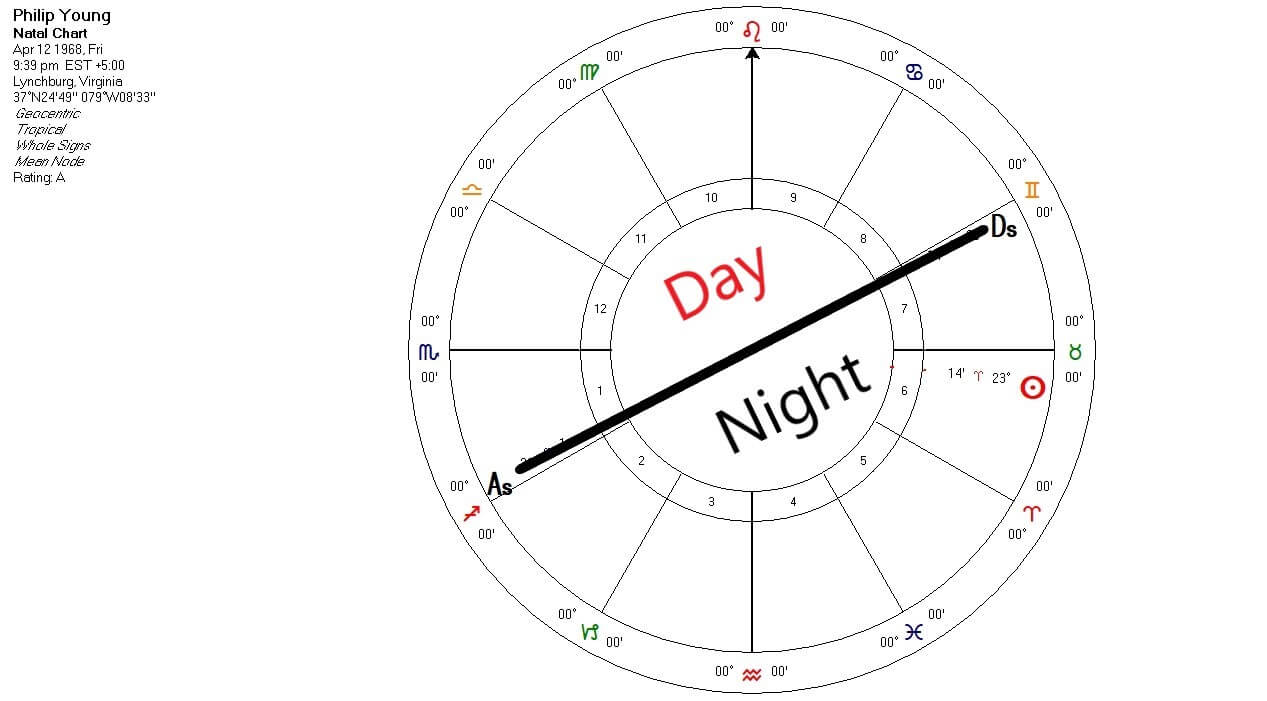 People with day births will operate best during the day.  They may even notice if asked to think about it, that they are “at their best” around the time of their birth.  It can also be quite significant if the person was born just after dawn, at midday, or just before dusk.

In terms of meaning, we recognize and interpret transition times (near dawn/dusk) or fully realized times (Sun at its highest point) as significant.  If the Sun is near the AS or DS, or MC or IC (for that matter), then we can expect the energy of the person to stand out in some way. Generally, we can expect the day birth person to be extroverted unless other factors in the chart or their lived life suppress this energy.

People with night births will operate best at night and may even have a special relationship with their dream state if they were born deep in the night.  Like day birth individual, if the night person is born just before dawn, in the very middle of the night, or just after dusk, there will be a merging of the Sun’s energy with one of the angles of the chart, which is always noteworthy in astrology.

Night individuals will likely be more introverted by the design of their Sun, but could still lead extroverted lives because of other strong factors in the chart or circumstances that force them out into the world (like being born to famous parents or having a significant talent that others want to see “in the light of day”).

Exploring the Meaning of Twin Flame

The Many Faces of the Empress in Tarot Cards