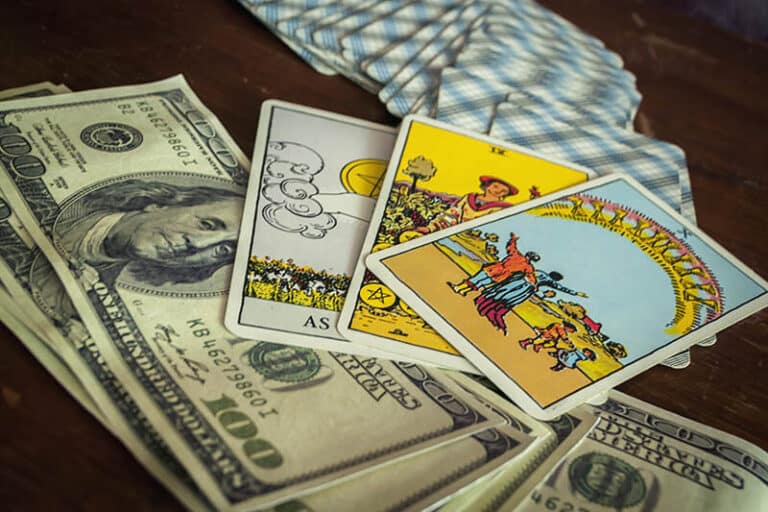 While it is true that any deck can be used for any question, and all tarot decks have the suit of Pentacles or Coins to reflect our material world and pursuit of financial stability and success, this article will spotlight several decks that are especially useful for career and money matter readings. The decks for this article include the classic Rider-Waite tarot, the PoMo tarot, the Law of Attraction tarot, and the Haindl tarot.

Originally published in 1910, the Rider-Waite Tarot by Arthur Edward Waite and Illustrator Pamela Coleman Smith is the most copied and best-known tarot deck in the world.  Based on 14th and 15th-century culture, transitioning from the knights of the medieval period to the merchants of the Renaissance, this deck is excellent for any questions involving work and finances.

Not only do the Pentacle cards cover all the energy of money and career, but the Wands also include many figures who are clearly the merchants getting ready to set off, or already on, and adventure.  Even the Cups suit has a merchant or two in its sequence.  If you prefer to work with the deck that really launched a 1000 more decks, then this is the deck you need to pick for your reading about your career and finances.

Published in 1994 by US Games Systems, the full title of the deck is: The Pomo Tarot: A Postmodern Deck for Navigating the Next Millennium.  The Amazon description states:

Postmodernism has already swept all the major artistic disciplines: art, architecture, literature, dance, and music. Brian Williams offers a postmodern twist to the tarot. Each card of the Minor Arcana has been inspired by a modern artwork, while the traditional suits of the Minor Arcana (staves, cups, coins, and swords) are transformed into TVs, bottles, guns, and money-icons with meaning for 21st-century readers. Among the 22 cards of the Major Arcana, the traditional, Jester-like Fool has become a trendy idiot, the Magician has become a scientific expert and the Empress and Emperor have become Mum and Dad. A companion guidebook is included.

While the Rider-Waite is the old-world view of emotions, adventure, thought, and the material world, the PoMo deck lands squarely in the modern era.

So, if you have a question about career, it makes sense to use a deck from an era where the word “career” applies.  If this deck is too far at the other end of the “thematic” perspective, then one of the next two decks might prove more useful for you.

The Law of Attraction Tarot

Published in 2011 by Llewellyn, the deck gets its name from the concept, principles, and practice of the Law of Attraction.  The Amazon description states:

According to the law of attraction, anything we want can be manifested―you just need to believe it. Rhonda Byrne’s blockbuster The Secret and its recent sequel The Power unveiled this amazing principle to millions of people worldwide. The Law of Attraction Tarot Deck, inspired by the Thoth tarot tradition, is designed to help you put the law of attraction into practice. Discover what it is you want from life―wealth, a dream job, improved health, loving relationships, peace, and happiness―and project this message to the Universe. Whatever your desires, this powerful tarot can help you bring these dreams to reality.

This deck is the most current of the decks recommended.  And like the PoMo Tarot, many of the cards outside the suit of Pentacles represent themes easily connected with work, business, and career.  Take the 5 of Swords, which shows a stock scale dropping precipitously:

Or the 10 of Scrolls, which shows a ship coming into a harbor while workmen and bystanders celebrate “their ship coming in”, which is a distinct departure from the more common image of a figure overburdened by 10 staffs.

Even the Cups have a couple of cards distinctly related to the material world, the Ace (represented by a cornucopia) and the King represented by a businessman doing a presentation; shown below:

Professionally, this deck is my “go-to” deck if a client wants to explore issues around career, work, and money.  It is also the most visually accessible of the four decks, meaning the reader and querent can rather easily discern the meaning just by looking at the card.

Published in 2011 by US Games System, this deck is actually more complex than the Rider-Waite tarot.  Hermann Haindl incorporates the I-Ching hexagrams, Rune symbols, and the Hebrew alphabet into the card system.  He also breaks with the traditional court card scheme replacing the Page, Knight, Queen, and King with the Daughter, Son, Mother, and Father.  He also incorporates four different mythologies for the family lines: Nordic/Celtic for Cups, Egyptian for Swords, Native American for Stones, and Hindu for Wands.

While the Rider-Waite art is dated, the PoMo art a little too “casual”, and the Law of Attraction art nicely accessible, the Haindl art is much more dynamic and “mature”.  If you happen to be doing a reading for a high-powered CEO, this is the deck you would want to use.  On each of the numbered minor arcana cards are keywords, which can apply directly to any question because the images are simply a collection of the symbols for the suit.  Below are examples:

Fortunately, Rachel Pollack, a renowned tarot scholar, wrote two books on the Haindl tarot, one for the Major Arcana and one for the Minor Arcana.  She goes into great and thorough detail about all the cards.  You really do not want to own this deck without owning these two books.  If you want serious answers to difficult questions, this deck will provide them.

How to Attract Someone Based on Their Star Sign