What is it that makes astrology so intriguing and mystifying? A part of the answer involves how every question that astrology answers about one’s personality is accurate right down to the core. The other one goes on to show how so many components in the universe actively contribute for this knowledge to be conceived. As you may already know, astrology works on the movement of celestial bodies around the universe, and their positions are believed to cause or disrupt activities. These celestial bodies, maybe the planets in the solar system, the dwarf planets very few people know about, the sun, and what we will be discussing in the following text, the moon. Moon astrology is an essential part of deriving knowledge through the celestial bodies.

In astrology, the moon plays a pivotal role. In strictly personality-based parameters, it is responsible for the soul and emotions at a person. If one is to look closely, both of these are connected at a deeper level. The soul feeds on emotions and thus enables the body to work. Negative emotions put the soul through trouble, which makes it lose all determination, trying to put the body into self-destruct mode.

However, if the soul is fed happy emotions, like joy and kindness, even compassion, it begins to learn how to give strength and willpower to the body so it can readily achieve its goal. When talking about the zodiac signs, it is important to know that each celestial body has its sign with regards to the position it is in at any given moment. The most commonly interpreted zodiac signs are that of the sun.

However, the moon signs hold a significant position in astrology too. In some cases, the sun and moon signs are even given equal importance when drawing up a sun or moon sign chart. An important factor is that the moon moves into a different sign with every two to three days. This would mean that a Libra born on the twelfth of October would not be the same as a Libra born on the fifteenth of October regarding moon astrology.

What are moon phases?

Before we move on to discuss the specific role of the moon in astrology, we need to know the basic principles that govern the moon and its orbit around the earth. As you may have noticed so many times yourself, the moon does not have a constant shape when viewed from the earth, like the sun. The moon keeps changing. 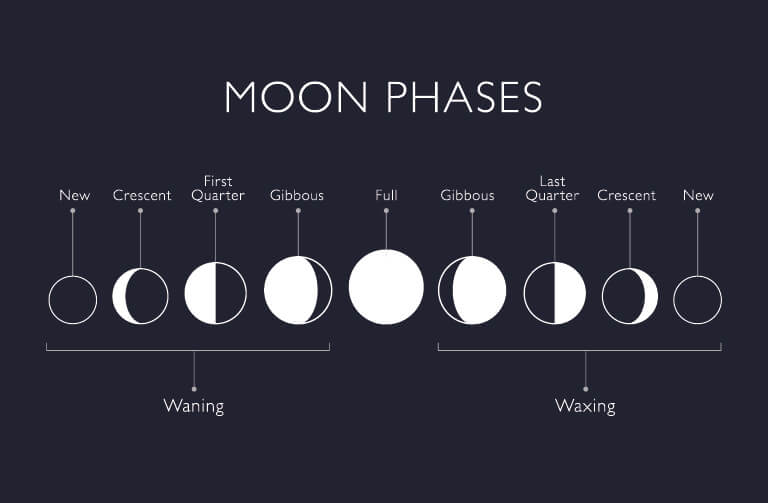 Sometimes it is a crescent, at other times only half of it is visible. On other nights, you can see a full moon, which has its own set of mythical stories too, like werewolves waking up in sight of the full moon. However, full moon astrology is different. This constant changing of how the moon appears to be, are called the phases of the moon.

Another phenomenon that is important to discuss here is that of the super moon. Although super moon astrology is not very common, the concept is that a full moon reaches the form of the super moon when it is at a point closest to the earth in its orbit.

This would require you to recall your fifth-grade science textbook. All of us did learn about the solar system, the moon, and all. What we need to take from it right now is the fact that the earth revolves around the sun, and the moon revolves around the earth. Another concept you would need to recall is that of how the day and night come into being. It is a result of the sun only shining on one half of the earth at any given time.

Similarly, the sun can only illuminate one half of the moon at any given time. Since the moon is not a light source in itself, we can only see the part of the moon illuminated by the sun, reflecting its light. The rest of the trick is done by the earth’s shadow on the moon, and voila, the 8 phases of the moon come into being. A moon phases diagram might do a better job at explaining this than just plain text.

To dive even deeper into how the position of the moon affects the zodiac signs, astrologers have combined detailed accounts for each. This knowledge is also known as moon sign astrology. Before we move on to that, an interesting thing to note is the astrology moon sign, which is sometimes also called the moon’s symbol, or glyph.

It is the most common way to represent a moon, as is done so by drawing a crescent. It goes on to show how the moon is a lens that takes light from the sun to project it to the earth. Of course, in reality, all it is doing is reflecting the light to make itself visible to earth.  Let us now look into each of the moon’s zodiac signs.

Like we discussed previously, your moon sign is determined by what zodiac sign the moon was traveling through when you were born. As is the case, people with an Aries moon sign had the moon traveling through Aries at the time of their birth. This has a significant impact on your spiritual self, how you perceive the world and greatly shapes how you intend to deal with the future. An Aries moon sign makes your inner self just like the zodiac; fiery, energetic, and passionate. It won’t be wrong to say that an Aries moon sign makes one very determined in their quest of life.

The moon sign calendar deals with all the zodiac signs falling into the moon’s positions. To calculate the moon sign, all one needs is to refer to the calendar. A person with a moon sign of Taurus gets to have the very qualities of this sign. In combination with the sun’s sign, these people are elegant in their dealings yet have a clear aim of ensuring security all the while. You can be safe in assuming that these people steal the show with their manners and appearance, and they never take it for granted.

For the people having Gemini as their moon sign, worry not, for you will find a way out of nearly every sticky situation, thanks to your wit and excellent communication skills. These people love to talk, to everybody. Some might find it annoying, for others, it is a skill that is one of the most valued in the entire world. This chapter also gives the moon Gemini people a particular skill to be able to relate to everybody and understand better as to what the next person is trying to say. If that is not a useful quality to have, we don’t know what is.

Moon Cancer people are unique. It, in no way, means not that sun Cancer people aren’t. Hear us out. People with Cancer as their moon sign are highly caring and compassionate towards others. This great quality is perhaps one of the rarest among zodiac signs which tend to benefit others more than it does the person of the sign itself. Friends, family and all people close come first for a person born when the moon is in Cancer.

We all know Leos to be brave, energetic, and as owners of adventure-driven souls. The moon sign of Leo is pretty much the same, except that it represents one’s inner side. The keywords that describe a Leo moon are expressive, colorful, and loud. Most of the people expect nothing else from a Leo, honestly speaking.

With the zodiac sign brandishing a lion, Leos are used to having their way around everything, and this is just how their inner self-works too if the moon is in Leo. Astrologers having worked upon the celestial bodies for so long come up with the conclusion that a moon Leo demands absolute adoration and attention to function properly, and that is just how it usually goes.

If the current moon sign falls between August 22 and September 22, then Virgo dominates your inner self. Virgos generally tend to be very specific down to the tiniest detail. Being so thorough is the reason that they find success in lesser tries as compared to others. This drive towards perfectionism, right from the very first attempt at anything makes Virgos different from the rest of the pack. There is a little problem, however. This strong drive for perfectionism can sometimes be a cause of neurotic behavior, which is self-destructive. Any Virgos need to avoid being overcharged and always be in control of who they are.

As any Libra would tell you, it is all about balance. While on the outside, a Libra always tries to make peace with everything and is probably the most compromising person you know of, having Libra as a moon sign is a completely different ball game. These people are very emotional and always are in need of another person to share their emotions with. The quest for balance within may often lead a Libra to be indecisive as to which side to favor. However, these are one of the most compassionate, kind, and loving people you will ever meet.

Scorpios do tend to have an air of arrogance about them. You may even see them boasting about the new shoes they bought and how better they are than yours. However, these are some of the most loyal friends one could ask for, and this quality is specifically enhanced if one is born when the moon is in Scorpio.

Another good thing about Scorpios is their decisiveness. They are either with you or against you, clear and simple. This often leads to criticism that they are not diplomatic enough. In the end, it is your choice of who you want to side with.

Ever wondered why a Sagittarius is always smiling and happy? It is because of their positive approach to life. Astrologers find this unending optimism as the biggest strength of a person born when the moon is in Sagittarius. This not only enables them to enjoy life to the fullest at all times but also find solutions to problems easily because of not wasting any time in fretting and worrying. Now, who wouldn’t want that, huh?

People with Capricorn as their moon sign take a high place, ahead of all others. This is thanks to the great leadership skills and visionary mindset that is bestowed upon these people, courtesy of the moon in Capricorn. With these skills, Capricorns have done great services the world over.

How many times have you met people who are religiously conservative? Although at times one would appreciate them of how they tend to stick to their values and appreciate their roots, sometimes it is too much to bear, isn’t it? This is where the Aquarius moon comes in to help people who are innovative, creative, and welcome the future with open arms. These are the people who lead the front of liberal movements and introduce new concepts to the world that are not just efficient, they are revolutionary!

Lastly, a Pisces moon is pretty much like the twelfth house; a mystery. This gets to such levels of extreme that at times a Pisces moon might have trouble registering their feelings, meaning that they can’t even tell for themselves. However, this doesn’t mean that all hope is lost. Pisces moons are still passionate, kind individuals who once figure out what they aim to do in life, go on to do wonders.

First Quarter Moon
The moon is currently in Gemini
The moon is 6 days old
Back to top button
Close
We use cookies to ensure that we give you the best experience on our website. If you continue to use this site we will assume that you are happy with it.
Accept Read More
Privacy & Cookies Policy
Necessary Always Enabled
Close