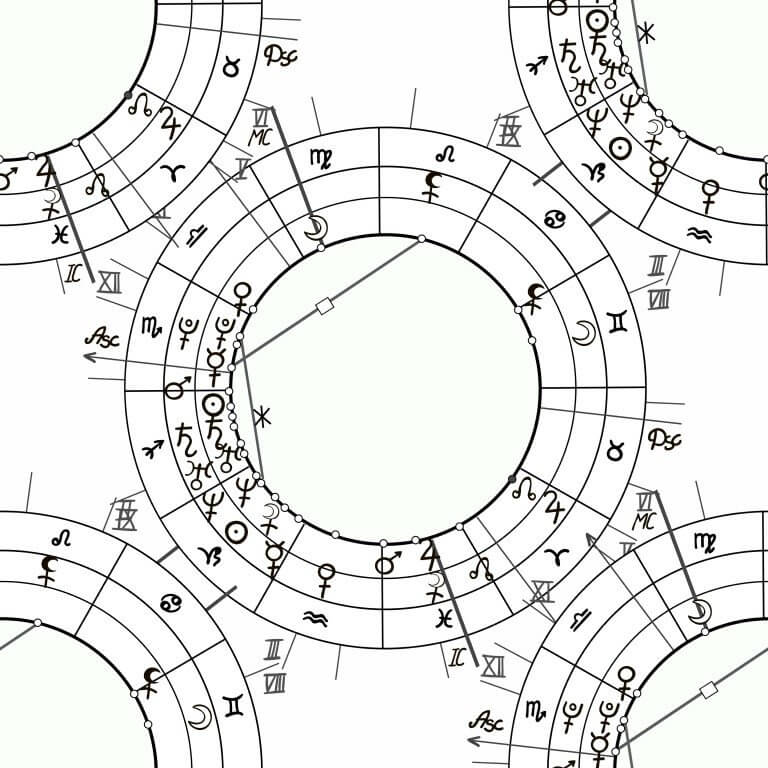 You can see if you and your partner’s Sun signs are compatible with each other.

Astrology and Natal charts can be daunting and complicated to some, however, you don’t need to know anything about Astrology to start looking into your Natal chart, or even relationship comparisons in charts.

There is a whole map of our relationships waiting for us to be discovered. The planets move through the 12 zodiac signs at their own individual pace, meaning they are never in the same place in the sky all at once.  (Unless you come across a Stellium, which is when there are more than 3 planets in one house or sign, which means they were grouped up in one place together, however, this is a rare occurrence). Depending on the planet and where is it positioned, you are able to look into its symbolism and interpret it. These planets carry with them energies that affect us, and our energies react differently to other people’s energies! A Synastry chart is when you take two separate Natal charts of two different people and you combine them to see how the planets and signs interact with each other, thus getting an indication of how they will interact with each other in a relationship.

Aspects in the Synastry chart:

Have you ever met somebody, and instantly “clicked” with them? Almost as if you have known them forever? When we have favorable aspects with our loved one’s planets, it leads to a deeper understanding of each other that we do not experience with most other people.

It is important to have an understanding of the four elements and the planets when interpreting charts.

Although some aspects are positive and some are negative, in a Natal chart they are all there to teach us something we need to learn in this life. In a Synastry chart, it teaches us what lessons are to be gained from the relationship.

When planets are in favorable aspects, they create a mutual flow of energies and understanding between two people, and this usually results in positive interactions and happiness. This will usually mean that they have some mutual interests and see eye to eye on a lot of subjects. Conjunctions indicate a very strong connection between those two aspects of your personalities.

Favorable aspects in a Synastry chart:

Have you ever met somebody, and instantly felt dislike towards them? You cannot see eye to eye with them, and everything they do sends an agitating feeling down your spine? In some cases, the differences between the two of you can even fascinate you. Although you might have difficult aspects to work through, it is possible to come to some form of agreement.

Planets in challenging aspects lead to more arguments and disagreements. An abundance of these aspects will indicate a challenging relationship. It is more difficult to find resolve, and it could lead to unpleasant situations. These aspects indicate major differences between two people.

Challenging aspects in a Synastry chart:

Certain aspects are said to symbolize a relationship with a karmic lesson. These interactions are known to be the most powerful and could be representative of a soul mate, or twin flame interaction. Here are some of the combinations that are known to have a strong effect on two people:

Sun in favorable aspect with Moon: Long-lasting lovers and married couples usually have this aspect. There is a big sense of understanding of each other’s emotions and needs, and there will rarely be major disputes or misunderstandings. Together they exert an aura of peace.

Sun in challenging aspect with Moon: Usually these aspects mean that you will have a passionate encounter with the person, but there will be a lesson to be learned from heartache. There are too many differences between you for the relationship to be one of fruition. If you do have this aspect with your partner, it is best to isolate yourself from each other when emotions rise in order for you not to make irrational decisions that could affect the relationship.

Sun in favorable aspect with Mercury: This indicates a strong friendship and mutual mental understanding. There will be a similar view and vision in life, and you will understand each other’s ideas and interests. It is said that the person whose Sun is in this aspect with the other person’s Mercury holds the power in the relationship.

Sun in challenging aspect with Mercury: This aspect usually occurs between family members. It brings a feeling of familiarity, and people with this aspect will feel like family to each other. It also indicates a very mentally-charged relationship, where you will have conversations hours on end discussing your topic of interest. It could bring some tension, as some of the habits of the one will bring anxiety and tension to the other.

Sun in favorable aspect with Venus: You will encourage each other’s strengths and help each other become the best version you can possibly be. Your interactions are generally pleasant and filled with love and peace. It is a very good aspect to have in a partnership.

Sun in challenging aspect with Venus: Although squares and oppositions are said to be negative, when it is between certain planets such as Venus and the Sun, it could lead to an interesting interaction where “opposites attract”, and you two will be intrigued by the foreign nature of each other.

Sun in favorable aspect to Mars: There will be an extreme amount of passion and chemistry between you. This indicates a high level of physical attraction between two people.

Sun in challenging aspect with Mars: There will be a lot of conflict regarding the Sun person’s habits and beliefs and the Mars person’s actions. The Mars person might do things that the Sun person disapproves of, and could lead to emotional tension. Try not to be too defensive around each other, and allow each other to have weaknesses.

Sun in challenging aspect with Saturn: This usually indicates that there is an age difference between you. The Sun person will have a lot of lessons to learn from the Saturn person, and the Saturn person will be the wiser, more mature person in the relationship. This aspect makes for a strong marriage that will last. Usually when two partners with this aspect separate, they are destined to be together again.

Sun in favorable aspect with Uranus: There will be a lot of romance between you, and you will be able to maintain this romance for many years, if not forever! Even if you do separate, there will be a degree of understanding between you that will lead to a lasting friendship. There is a sense of mystery that surrounds the two of you.

Moon in favorable aspect with Venus: There will be faithfulness and devotion in this relationship. This is a strong aspect for marriage, as you have a calming effect on each other. Conflicts will be resolved quickly without much struggle.

Moon in challenging aspect with Venus: The moon person may be easily angered and moody, however, the Venus person will have a soothing and positive effect on the Moon person’s moods and may help them resolve some deep emotional issues.

Moon in favorable aspect with Mars: This is a common aspect in couples who have conceived a child together. Their love for each other is usually turned into a physical force such as bringing life into this world together. This is also a good combination for business partners as they will be able to create a powerful project together.

Moon in challenging aspect with Mars: Intense physical chemistry will be present, and this is what will bring you two together. There might be secrets kept in this relationship, and it will be difficult to sustain a strong emotional bond once the physical attraction wears off.

Moon in favorable aspect with Saturn: This is a very harmonious aspect. Saturn will be the teacher in the relationship, having gone through many challenges. The Moon will help Saturn work through their difficult times and painful emotions from the past. You will remain loyal to each other.

Moon in favorable aspect with Uranus: There is a magnetic attraction that has brought you two together through some strange unusual situation. Romance and passion run very high, and there will be many interesting and out-of-the-ordinary experiences that will bring you two closer together. You will never get bored with each other, and there will be a constant fascination with each other.

Moon in challenging aspect with Uranus: This relationship is usually very unconventional, and could be a result of a love affair. There is a sense of “danger” when you two are together, and it sparks excitement in both of you that you rarely feel with others.

Mercury in challenging aspect with Mercury: There will be many verbal debates, and the relationship can feel like it is a constant battle of arguments and criticisms. You both think very differently, and you have little in common. It is difficult for you two to find common ground on most things.

Mercury in favorable aspect with Venus: You both understand each other’s emotions and point of views very well. This is a very balanced combination. There will rarely be disagreements between you two.

Venus in favorable aspect with Mars: There will be intense passion, and increased physical desire. Together, it leads to a mysterious trembling experience, that cannot be matched. If you two have negative interactions, it is usually lessened by this aspect. The Mars person may tend to have a jealous possessive streak, but the Venus person is able to calm it down and put Mars at ease.

Venus in challenging aspect with Mars: Your love styles are very different, and although this aspect causes intense attraction, you will have to compromise with each other in terms of how you show love and affection in order for you to have a lasting bond.

Venus in a favorable aspect with Saturn: It is almost as if you have been destined to be together. Together you are able to bring much abundance to each other’s lives. You two have many valuable lessons to teach each other in this lifetime.

Venus in challenging aspect with Saturn: Although this could start as a loving relationship, the Saturn person will do something that breaks the Venus person’s trust. This could be by mistake or purposefully, but this combination usually leads to heartbreak.

There are many more aspects that have effects on our relationships, but the most powerful combinations are those involving interactions with each other’s personal planets, such as The Sun, Moon, Mercury, Venus, and Mars. Any interactions with Saturn usually indicates karmic lessons and past live interactions. It is important to look at the signs the planets are in, as they will give a big indication of how the interactions will be.