The Astrology of Brexit 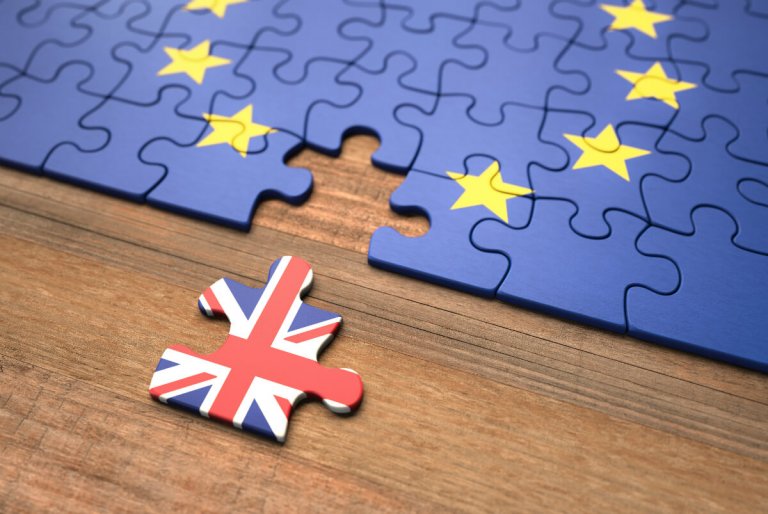 The use of astrology to look at world events and current events is known as Mundane Astrology.  Charts are cast for specific events at the location of the event or the capital of a country.  The vote for England to leave the European Union took place on June 23, 2016; 52% of the electorate voted in favor of leaving the Union.  Actually, leaving the Union has not taken place, even though there have been several attempts to do so.

The most recent target date for leaving was March 29, 2019, but Brexit did not happen and was delayed.  The new target date is October 31, 2019.  This article will look at the potential astrological indications for leaving and staying, as well as the implications, energetically, if the decision to leave takes place, another delay is put forth, or a new vote is sought to end the pursuit of Brexit entirely.

Mundane Astrology and the Chart of an Event

As October 31 approaches, anyone following or involved in the Brexit issue has to wonder if this date will be “the date” that England leaves the Union or not.  The chart for the day is not going to guarantee an outcome.  Some of the top names in astrology completely whiffed on Donald Trump, making a fundamental error in presuming an astrology chart shows a specific result.

The decision to stay or leave the Union will be the determination of the leaders of the countries involved.  But the chart of that day can tell us an immense amount about the implications of three possible outcomes: 1) hard Brexit; England is out with no trade agreements and will have to work with the Union as would any other foreign nation, 2) delay again, drop the idea of a hard Brexit and work until a negotiation takes hold, 3) extend again and try to see if new referendum has the votes to override the previous one and end Brexit efforts for the time being, or 4) the European Union says “enough!” and throws England out. 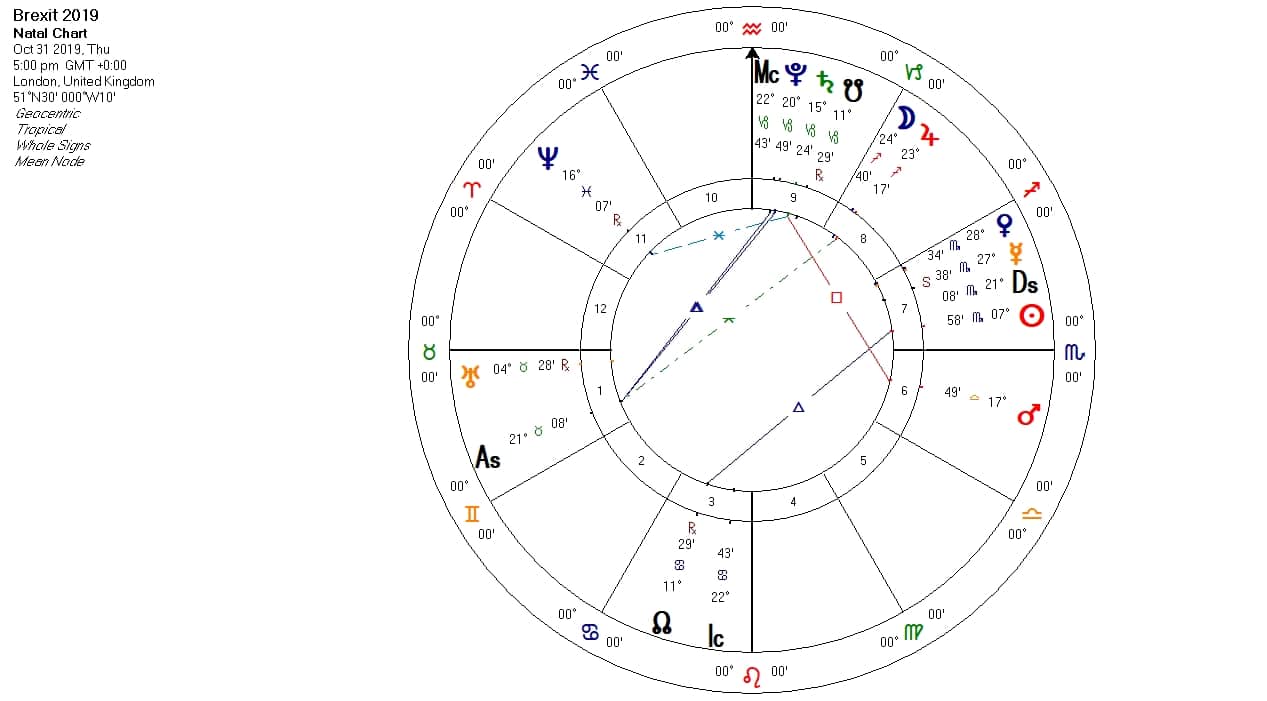 Assuming that England is no longer a European Union member on November 1, what can this chart tell us if this decision is made in favor of a hard Brexit. The Sun, Mercury, and Venus are all in Scorpio on that day, with Mercury and Venus are in a very tight conjunction.  Mercury is stationary. Jupiter and the Moon are conjunct, Uranus and Neptune are both retrograde.  Mars is in Libra, making Venus and Mars in mutual reception by sign in traditional astrology (where Venus rules Libra and Mars rules Scorpio).

Should the hard Brexit take place, it will mean a fundamental change in thinking and a radical redefinition of daily life (Uranus Retrograde in Taurus).  There is a midpoint square of Mars in Cancer between Pluto and Saturn in Capricorn, suggesting some profound hardships as part of the transformative work needed at the infrastructure level of business.  No way around it; there will be a significant jolt at the most basic levels of the society, rather like drawing the Tower card in a tarot reading.

Should this take place, this “blowing up” would mean getting a new start where different choices can be made in the rebuilding process.  Or it will just present a chance to follow the old paths, but with the hopes of some kind of different outcome.  If Brexit becomes official at the end of the business day, with the Sun below the horizon, then both Jupiter and Saturn would be out of sect making the decision work against the outcome. It would be better if the Brexit decision could be made before the Sun sets so that the sect mates of the Sun would be in the same sect, and the chart would be a day chart.

Another Delay Takes Place, More of the Same

If the hard Brexit does not occur and deal is not in place, but there is a willingness to keep negotiating, then the chart would show that the outer retrograde planets are still stronger than the personal planets active in Scorpio at the time.  Also, the South Node is still near Saturn, which is likely to prefer to keep things the way they are than make a change, even though Pluto is sharing the sign with Saturn and the South Node.

Jupiter in Sagittarius would really like some movement, one way or another before it finishes its journey through the sign of its rulership.  In some ways, the “greater” adventure would be to leave the Union and see what awaits in a “brave new world” post the European Union.  If a deal cannot be reached, with the Moon so close to Jupiter, the feelings to get forward movement will be quite high, so it is unlikely that ditching the Brexit goal would really be an outcome, though it does need to be considered.

Mainly, the South Node in Capricorn, still very close to Saturn, suggests very reluctant energy for change.  Believe it or not, February of this year, when the South Node was approaching Pluto, would have been a better time for Brexit, which is interesting that one of the deadlines was at the end of March.  If there is another delay, the next best time to shoot for would be January 2020, when Jupiter and the South Node would be joining and Saturn and Pluto would still be in Capricorn.

One last possibility for England would be another referendum to end the Brexit effort altogether.  Should that come up during this moment, the energy would weakly support it.  Three years is certainly plenty of time for Brexit fatigue, so a window to propose a new referendum could open at this time.  Again, the end of the year, the beginning of next year presents an astrological power gathering that could finally settle the issue (among many issues worldwide).

It does remain possible that the Union itself will decide to push England out and this moment could invite that possibility as well.  Remember, this chart applies to “Brussels” as well as England.  While it does not support the push to remove England, it could certainly set the stage for such action from the Union at the beginning of the new year.

For those who want to push through a hard Brexit, that day, astrologically speaking, will require significant effort to make it happen.  The energy really more supports another delay than either a hard Brexit or an end to Brexit. And one last thought involving Jupiter and Neptune, which are currently in square signs.  There is a general swirl of delusion when these two points “square off” especially in their signs of rulership.  Neptune is the stronger of the two, so clear outcomes are murky at best.

In the end, I expect more confusion than clarity on the issue unless a tremendous force of will appears and persists.

The Goose Totem in the Native American Zodiac

10 Tips to Elevate Your Meditation Practice