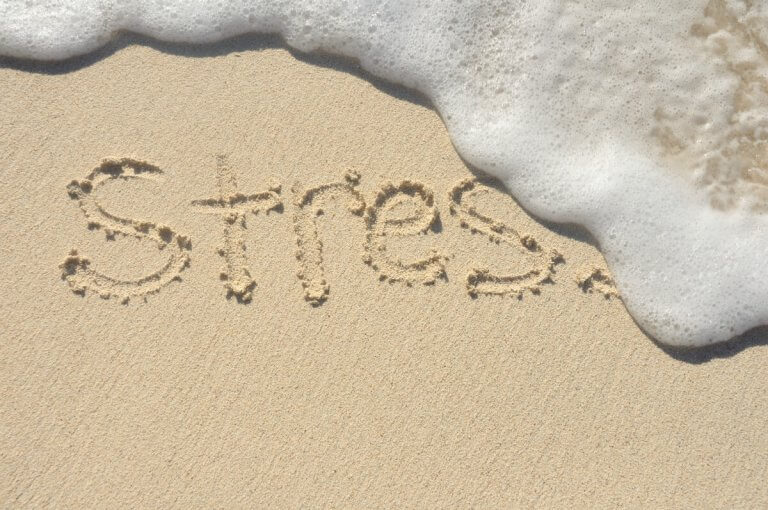 Reiki has become a very popular way to reduce stress and anxiety. The practice of reiki is based on a foundational understanding of “ki” (the ki part of the word reiki). Ki is the invisible energy that flows through your body. Some call it a “life force.” When your mind and body are at peace, this energy is harmonized and each chakra in the body resonates at a particular frequency. In calm low stress and low anxiety state, the flow patterns of ki energy are smooth and regular. The ancient healers seem to know this intuitively but it has now been scientifically proven as well because the frequency and patterns of ki energy can be detected using modern equipment and precisely measured and mapped.

What Happens To Your Aura When You Experience Stress or Anxiety?

When analyzing a person’s stress and anxiety level, it turns out that the aura can be an excellent indicator! Your aura is the layered energy field surrounding your body. When the body and mind are relaxed, the aura energy field expands, and the energy layers are smooth and ordered. However, tests have shown that when a person is stressed, such as when they are exposed to an annoying sound or they’re anxious about an exam, the aura energy field layers will flatten out and become irregular.

Dr. Valerie Hunt, a neurophysiologist at the University of California at Los Angeles (UCLA), is a leading scientist studying aura fields. She has proven that auras change color, resonate at different frequencies, and expand or contract in response to different types of music — and how a particular type of music affects a person varies between people. This makes sense because a certain genre of music, or even a specific song, that relaxes one person may actually make another person anxious. The professor has also shown that aura fields expand when a person is in a loving, peaceful, or safe environment whereas they flatten in a stressful or unsafe environment.

What’s most fascinating is that reiki can have the same profound effect on aura energy fields as music or be in a loving environment can have. In fact, the relaxing effect of reiki is even more pronounced in some people, especially in the first few sessions of reiki! This is because when reiki is first given, the energy fields within the body and within the aura experience the greatest adjustment. You can think of that first couple of reiki therapy sessions as overhauling a car engine and the later reiki sessions as tune-ups.

The Concept of Ki Arose Many Times Across Diverse Cultures

One way to know that the ki in reiki is real and that the practice of reiki produces real results is to understand that many ancient cultures INDEPENDENTLY developed the concept of ki and practices similar to reiki. In fact, the concept was so important to each of these cultures, they independently developed an entire vocabulary around the practice of unblocking and or manipulating ki for mental health and physical health. In fact, the reason the ancient healers intuitively understood that mental health was intrinsically linked to physical health, and vice versa, was that they understood both were linked to the same vital life force.

The concept of ki in Japan, and the similar “chi” or “q’i” in China, actually goes by many different names across diverse cultures. In India, the word, “prana,” means essentially the same thing as ki. In New Zealand, the native Maori people used the word, “Wairua,” for a concept similar to ki. In the ancient Hebrew texts, the word, “Ruarch,” is used to refer to the same life force. It is quite interesting that these far-flung unrelated cultures all developed the concept of ki and rich vocabulary and unique but still somewhat similar methods to unblock ki and harmonize its flow — and they all figured this out, without modern science. They all understood that doing reiki, or energy therapies similar to reiki, reduced stress and anxiety and healed the physical body too! This just doesn’t happen across several unrelated cultures if ki and the effect of reiki and similar energy therapies aren’t real!

How did these ancient healers know that ki, an invisible force that they could not see, and had no instruments by which to measure or map this energy, was real? They didn’t depend on actually being able to “see” or test for this energy. It was more about “feeling” or “sensing” this energy was thereby feeling or sensing the impact of unblocking and harmonizing this invisible force. Just because they couldn’t see it didn’t mean it wasn’t there. Likewise, not being able to see the wind or touch it like a solid object doesn’t mean it isn’t there. We know it’s there because we can feel it and we can see its effect with it moves the leaves in the trees or blows our hair. The flow Ki is more subtle than the movement of wind but ki can be sensed in much the same way.

Modern Physics and Reiki Have A lot in Common

Although reiki was developed in Japan in the 1920s, the roots of it go back to ancient Tibetan healing practices. Therefore, the practice of reiki is essentially ancient eastern medicine with a few modern twists. Now, here’s where things get totally ironic… reiki and other ancient forms of eastern energy healing, are more in line with the concepts of the most cutting-edge MODERN physics of the 21st century! By contrast, western medicine, what many of us think of as “conventional medicine,” or “modern medicine” is more in line with classical Newtonian physics developed in the late 1600s and 1700s.

It’s almost as if our modern-day physicists, who work in cutting edge physics subspecialties, like quantum physics and string theory, are beginning to prove how and why eastern medicines, like reiki, work. The way reiki and other eastern energy therapies work was previously considered a major mystery. We still have a long way to go before we fully understand how reiki works but put on your radar that modern physics may actually be able to explain it to us in great detail before modern medicine fully realizes it!

Western medicine views the human body more like a complicated machine with mechanical parts, a system of pulleys and levers. Messages between these mechanical parts are sent via nerves and hormones. Blood delivers the needed nutrients to maintain the mechanical parts and energize them. The roots of western medicine were born at the same time as Newtonian physics, where the laws of gravity and other easily observed forces rule the universe. However, eastern medicine, including reiki, is much more akin to the most cutting-edge modern specialties in physics, including quantum physics and particle science.

Quantum physics is based on energy fields and subatomic matter (quanta are the smallest building blocks of all matter). Modern physics started with Einstein’s famous E=mc2 and his revolutionary concept that matter is extremely slow-moving energy and that energy comes from matter. A simplified view would be that our bodies are different phases of energy and reiki therapy can be used to relieve stress and anxiety by tapping into this energy and harmonizing it. Modern physicists also spend a lot of time thinking about the energy of the heart that is transferred along through nerves. Reiki therapy taps into this nerve pathway for energy flow. Some people believe that “meridians” are nerve pathways of the parasympathetic nervous system.

If you live in a “western country” like the United States or a European country, your primary experiences with medical treatment are likely western medicine. As a result of this experience, you may come to reiki and other eastern therapies with a certain amount of skepticism because that’s how you’ve been brought up to think. For a long time, people in most of the western countries perceived western medicine as superior to eastern medicine. Western medicine has been portrayed in the western media as being more scientific and fact-based than Eastern Medicine which has been often portrayed as more mystical or superstitious in nature, not as reliable.

As modern physics continues to alter our notions of energy and matter and how the universe works, we are seeing a growing acceptance of eastern medicine. The link between the ancient concept of ki and eastern energy therapies to modern physics may not be apparent to many but modern physics is changing the way westerners perceive eastern medicine like reiki. There is more acceptance of eastern medicine like reiki. As more westerners view reiki as a real healing mechanism, different but on par with western medical techniques, they will be more willing to try reiki. Many who have done so have decided that reiki is actually a more effective treatment for stress and anxiety as any prescription drug on the market and it comes without the negative side effects and a whole host of other health benefits.