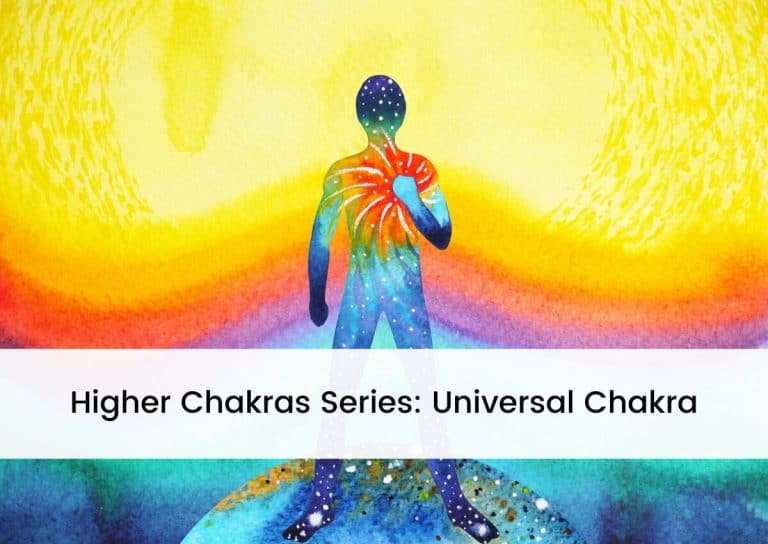 Where Is the Universal Chakra Located?

As the third chakra in the Higher Chakras, the Universal Chakra is located between the Spirit Chakra and the Galactic Chakra. This means it will be located more than a foot above the crown of the head, with the exact distance varying between individuals. It is more difficult to learn how to activate the Universal Chakra than the other Higher Chakras located closer to the Crown Chakra.

Most people cannot see the Universal Chakra and other Higher Chakras with the naked eye. However, those people who are able to access and control their Universal Chakra can become so attuned to the energy in the Higher Chakras they can intuitively sense the chakras in the aura of other people, quite a desirable talent if you happen to be a psychic or mystic — or a client of one of these professionals.

What Is the Universal Chakra and Why Is It Important?

It is said that the Universal Chakra is where the Divine Light first becomes truly in focus and allows you to see all of the wonders of the universe with more clarity. The Universal Chakra can connect you to the free flow of energy and the unconditional love that courses through the entire universe. It is the first chakra in the Higher Chakras that allows you to tap into extremely strong psychic powers and allows you to use those psychic powers for direct soul healing and changing the destiny of the karmic soul.

The Universal Chakra will be of keen interest to you if you want to explore fascinating topics like reincarnation, past lives you may have had on other planets, the purpose of various light beings in the universe, interdimensional travel, and interstellar travel. The Universal Chakra can be a portal to other space-time continuums, i.e. time travel even beyond what most of us recognize as linear time, and in this case, to all sectors and dimensions of the vast universe.

The term is alternately spelled as “Divine Merkabah Light Body.” The word is actually three ancient Jewish words put together into one: Me Ka and Ba (or Bah). These three words translate into “Light Spirit Body.” Some say that Merkaba means the merging of the spirit and body and then bathed in the light. In the Hebrew tradition, the Merkaba is a chariot made entirely of brilliant shimmering divine light that caries both the body and soul to a higher realm.

The Divine Merkaba Light Body is symbolized as a complex geometric shape consisting of two interlocked tetrahedrons (three-sided pyramids). It is sometimes referred to as an “eight-pointed star” or a “stella octangula.” The symbol is considered sacred to many. In some teachings, the Universal Chakra is considered a gateway to the Divine Merkaba Light Body which causes light body activations in the physical body. These transform specific individual cells helping to make possible the connection of one’s soul to all dimensions in the entire universe.

How Do Psychics Use the Universal Chakra?

The Universal Chakra and the other Higher Chakras are what give the most gifted psychics their strong powers of the prophecy of events into the future. Their Universal Chakra, when fully activated, also gives some psychics the ability to help their clients interact with their past lives, including those that have been lived in other sectors of the universe. This is advanced stuff and not normally part of regular psychic reading. With practice, the psychic power conferred by the Universal Chakra can be strengthened into a truly great power.

There seems to be a growing agreement that women tend to be more psychic than men — but is this really true? It does seem to be the case that women have an easier time learning how to activate and control their Universal Chakra, the 10th Chakra. The discussion now seems to be turning to whether or not this is nature or nurture. In other words, are women born with more innate ability in their DNA makeup than men to activate and control their Universal Chakra or does society allow them freer access to such notions and pursuits starting at a younger age which leads to the more psychic ability by the time they are adults? Another possibility on the nature side of the argument is that women could have, on average, more highly developed Universal Chakras.

The energy in a Divine Merkaba Light Body represents two counter-rotating fields of energy spinning in opposite directions. Some equate this to opposites attracting, with one side facing the sun and being drawn into the universe away from Earth and the other side being drawn down and grounded in the Earth. The energy patterns around certain crystals behave in this way too which may explain why certain crystals can activate the chakras, particularly the Higher Chakras.

When you think about it, this is the perfect metaphor for all the Higher Chakras and we may one day discover energies in the Higher Chakras, like the Universal Chakra, actually flowing and interacting in this precise way. The ancient cultures who first studied chakras and used them for healing have been proven right through modern scientific techniques. Stay tuned! Things continue to become more fascinating as we delve deeper!