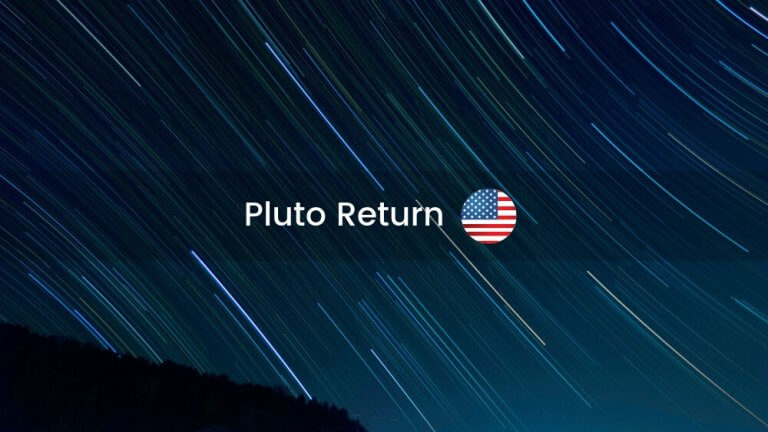 Mundane astrology is an area of astrology devoted to past, current, and potentially future energy trends that affect history, society, countries, economics, and politics. For most of astrology’s history, mundane astrology was used to predict the course of a country’s fate, usually through the birth chart of its ruler.

The Birth of a Nation

The date for the birth of the United States is one of the most widely known, even worldwide, on July 4, 1776.  The location for the signing of the Declaration of Independence was Philadelphia, Pennsylvania.  And the most commonly accepted time of birth was determined by English astrologer Ebenezer Sibley at 5:17 pm. Below is a copy of the US Sibley Chart:

The US Sun sign is Cancer; its Moon is in Aquarius, and its Ascendant is Sagittarius.  At this time of birth, Pluto was at 25 degrees and 47 minutes of Capricorn and retrograde. It takes approximately 247 years for Pluto to make a full cycle around the astrology wheel.  Pluto will be at 21d27m of Capricorn on August 1, 2019.  While it is still 4d away from the exact conjunction, people living in the US and observing current events from outside can already see some of the impacts of this transit.

Pluto is the point associated with power, transformation, death/rebirth, and upheaval.  In a natal chart, it represents the way the native brings about transformation and where in life.  In the Sibley chart, Pluto occupies the 2nd House of Personal Resources and Needs.  Interestingly enough the nation was built by immigrants seeking a better life who had to “build the nation” from the wilderness up. Self-made individuals represent the backbone of the nation at its birth.

The European settlers left civilization to build a new world, starting with small colonies that grew into the nation over time.  When the nation’s birth officially occurred, this form of transformation became a bedrock for the nation’s Plutonic character, which thrived on the entrepreneurial spirit. As much as it was an upheaval towards something new for settlers, it also represented upheaval for the native people, whose homes and lands were destroyed in the “birthing” process.

Transiting Pluto is best described as earthquake energy.  It “shakes the foundations” to see what can survive its awesome power and what cannot.  In each sign it passes through it performs death and rebirth upheaval to “eliminate” what is no longer viable that is related to that sign’s energy.  It is a disruptive force that slowly moves through each sign between 17 and 31 years.

Pluto in Capricorn deals with the power of the business and the transformations needed to advance and achieve in practical ways that will reach the wider world.  Personally, Capricorn rules our ambitions and where we prefer to exert or engage with power.

In my own chart Capricorn rules my 3rd House of Communication, so I am constantly concerned with the power of words and knowledge, and how it is obtained and used. I was born with Pluto in Virgo in my 11th House of Community, so I am involved in and seek change in practical ways to help my community and the world at large.

When Pluto moves through Capricorn there is upheaval in the largest structures of society: government, big business, and societal organizations (non-profits, education, and religious institutions).  When Pluto entered Capricorn in 2008, the largest recession since the Great Depression occurred with the collapse of the sub-prime mortgage market, triggered by the bankruptcy of Lehman Brothers.  “Too big to fail” became a slogan that Pluto in Capricorn would gladly prove wrong, “nothing is too big to fail”.

Pluto’s Return in the US Chart

Below are two images, one indicating where the Pluto return is beginning to align and the second showing the first exact conjunction, which will take place on February 19, 2022 at 10:22 pm.  Strong effects will be felt in 2020 when it gets within less than a degree before going retrograde.  Below you can see the position of transiting Pluto in relation to the country’s natal Pluto and then the chart of the first exact alignment:

American politics got a “shot in the arm” with the administration that swept into power in 2017 at the national level, largely in response to the administration that took over in 2009 (right after Pluto went into Capricorn). Since then all levels of government have been experiencing a dramatic transformation that will not be fully understood until this transit is done.

It is an old saying that “what goes up, must come down”.  While the US stock market has achieved all-time highs recently, retail businesses have also reached all-time highs, in bankruptcies, direly named “retail Armageddon”. Just this past month Amazon Prime Day had sales that surpassed last year’s Black Friday and Cyber Monday combined, which surpassed traditional retail sales. Businesses are relying more and more on automation and artificial intelligence, which will further impact the human workforce.

Every major economy in the world is in debt; there is no single large economy that is solvent.  More importantly one of the most significant “too big to fail” issues for the United States is its monopoly on the global currency, which the American dollar currently backs.  A Plutonic level change that could occur during the peak of this transit would be a shift away from the dollar as the global currency backstop, forcing a near-immediate drop from economic superstar to economic every man for the US economy.

Higher education has been evolving into a debtor’s prison and the changing business and economic trends are putting a college education into questions except for the most professional of jobs that require a specific degree, such as law or medicine. At the more basic levels, grade school learning has become fractured into public schools, charter schools, private schools, and homeschooling, pulling farther and farther away from a once cohesive structure of early learning.

Where do Will Americans feel the Effects?

Since the US natal Pluto resides in the 2nd House of Needs and Personal Resources, Americans have been feeling and will continue to feel the transformative power of Pluto’s transit in their homes and personal finances. While larger institutions are being shaken up, individuals and communities already aware of the rumblings of this transit can take actions to help themselves get through this major transit positively by working diligently to amass savings and build healthy interpersonal networks.

There is a storm coming, and Pluto usually changes and transforms in fundamental ways that open the door for new opportunities.  Since the Pluto return is going to take place in the sign associated with large institutions and the structures that support American society, Americans can expect a recession, possibly a depression as an economic corrective measure in response to debt, as Pluto’s transit attempts to clean up any messes created in the last 247 years of US growth and development.

In much of the rhetoric thrown around about the current state of affairs, it is not far off to say that there is a battle for the “soul” of this country being waged that has its citizens thinking about and questioning the founding principles that were created when the official nation was born in 1776. Like a very powerful earthquake shaking a major city, this transit will show us what societal structures have become weak and must fall down, which ones will still be standing, and what new ones need to be built from the rubble of the old.