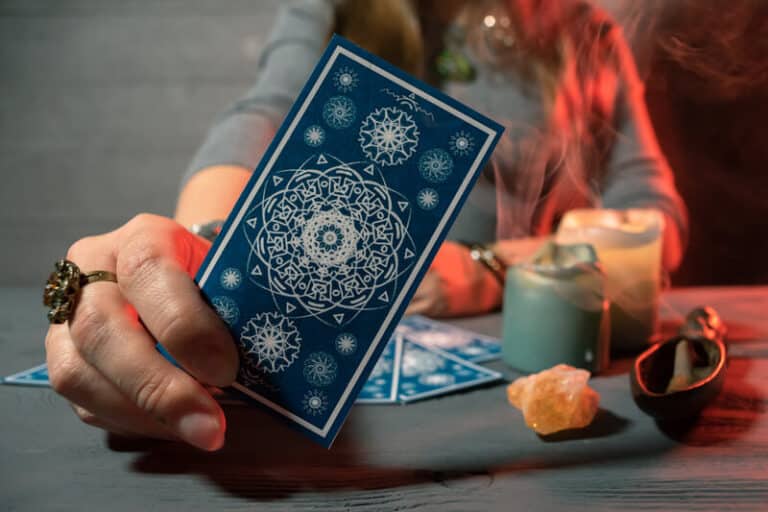 With 2021 behind us, I thought it would be fun to write an article about my top 5 coolest decks of the past year. This article is pure opinion, but my opinion is an informed one.

I have been a professional tarot reader since 1992 and am the art director for Da Brigh publishing (www.dabrigh.com), which will be releasing numerous new decks by some very creative artists in 2022.

My own collection of decks is over 100, and I use various decks in public when I read for events or in group settings. 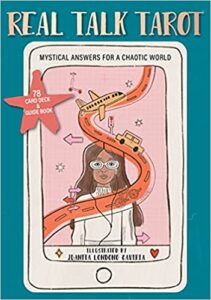 Created by Juanita Londoño Gaviria, this deck is not one that appeals to me personally based on the art style. However, it is a very cool deck because the visual messages of the cards are modern and oh-so clever.

I am currently using this deck as one of my top 5 “go-to” decks when I read in public, which I do regularly three to four times a month. The Ace of Swords is a dagger thrown into an apple on top of a woman’s head, the Six of Swords is a traveler getting onto a train, and the Tower is a Jenga tower getting ready to fall over because the player pulled the wrong block.

These cards make a great learning deck, as well as a current upgrade from the ironically out-of-date PoMo deck from 1994.

From the back of the box:

Let’s be real; modern life can feel surreal and disorienting sometimes. This tarot deck, updated from the classic Rider Waite version, is perfect for everyone from the novice to expert who is looking for guidance in today’s world, which often feels like it’s on fire.

Each of the 78 cards is connected to today’s world by characters and situations you might encounter any day. Some of the illustrations are lighthearted, like the King of Cups depicted as a handsome barista, and some are less so, such as the Seven of Wands represented by a heated political protest in the streets, but each card is true to the experience of life today while staying true to its original tarot meaning. 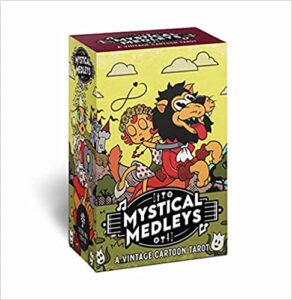 While I was born in 1968, I was still exposed to these cartoons growing up. This deck is retro cool and I would consider it a retro deck if it had been published 40 years ago. Released by Sterling Ethos and developed by Gary Hall, the cartoon style that makes up the images is from the 1930s.

Most of the generation that would know this art style is passing on, and they would not be the group to embrace tarot. But a new generation might just find this deck very amusing, but also extremely well done.

Here are a few sample cards, that hit the mark of the deck that inspires them, the Rider-Waite tarot by A.E Waite and Pamela Colman Smith. 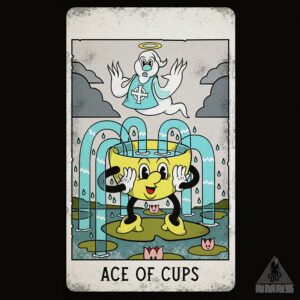 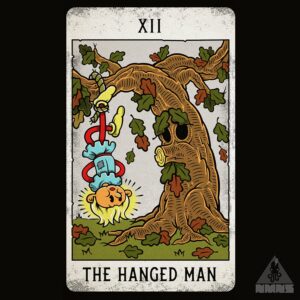 If you would like to read about the Merrie Melodies cartoon shorts that ran from 1931 to 1969, there is an excellent Wikipedia page worth exploring: https://en.wikipedia.org/wiki/Merrie_Melodies. 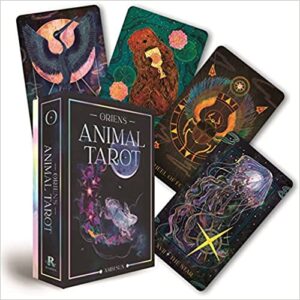 Another competitor in the Animal Tarot market, this deck was published by Rockpool Publishing. Ambi Sun, the deck’s creator, was born in Malaysia and currently resides in Australia. The artwork for this deck is top-notch, making it a very cool deck to own.

This animal-themed card deck reflects nature through mythical and ethereal means and is rich in animal symbolism, allowing you to spiritually connect with the universe and yourself through the exquisite art of divination.

Animals replace the roles of the traditional characters in the deck. Here are some sample cards: 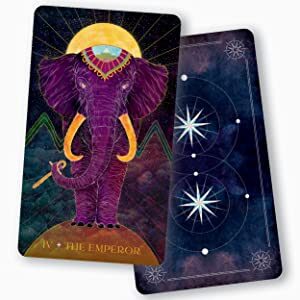 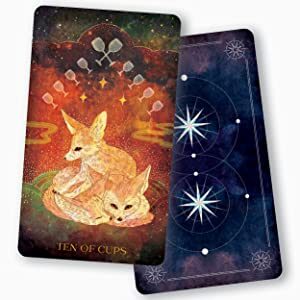 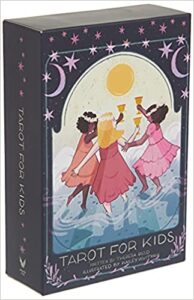 Something of a real breakthrough deck, the Tarot for Kids by Theresa Reed was published by Sounds True. This deck is truly accessible for children and tweens but can work brilliantly as a professional deck in public settings. Many of the Major Arcana have been renamed to make them more accessible to young minds; for example, the Hanged Man becomes Patience and the Lovers become Friends.

The future is waiting to be written by the strong, beautiful children of today. In a world in which things often feel out of control, isn’t it nice for children to learn they have choices and can connect with their inner guidance?

Tarot is a fantastic tool for teaching kids verbal and decision-making skills, how to set goals and move toward the outcome they want, and how to trust their instincts. It is like a trusted friend, one you can count on for advice and support.

Remember: the cards tell a story, but you write the ending. With Tarot for Kids, children are invited to narrate their own stories and find their power.

And from the back cover of the box:

Tarot is a great resource for advice, decision-making, understanding how to help your friends and family, making plans, avoiding drama, creative thinking, learning to trust your intuition, and so much more. Plus, it’s a lot of fun!

Check out the cards: 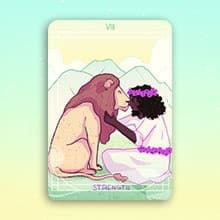 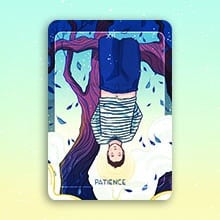 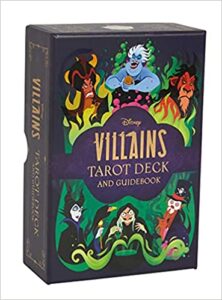 Disney’s movie catalog is plenty deep enough to provide villains for an entire deck. The publisher Insight Editions is rolling out numerous Disney property decks, and they are all fun to see, and pretty cool.

Writer Minerva Siegel and artist Ellie Goldwine brought this deck to life and it is a fun deck to use. See how many of the villains you know, just by looking at the cards! 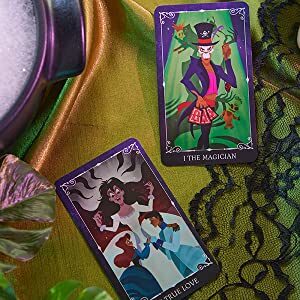 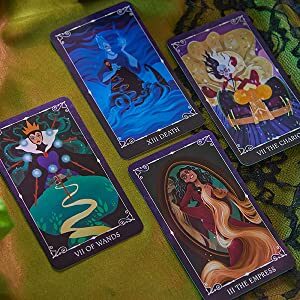 Mother Gothel is perfect as a villainous Empress, and Hades … well … he is the God of the Underworld. And what chariot could be more famous than Cruella De Vil’s Panther De Ville from 101 Dalmatians!

Add these cool decks to your collection and you will not be disappointed!