The Many Faces of the Fool in Tarot Cards 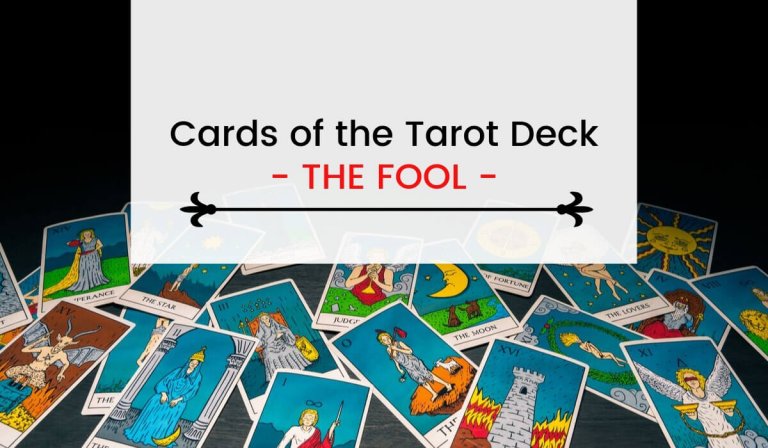 The Fool is the beginning and the ending of the entire Tarot journey.  We start as the Fool and we end as the Fool. It is the card in the deck that “trumps all others”. Tarot decks have exploded in numbers since the 1980s, with numerous new decks being published each year by traditional publishers as well as custom decks being developed by individuals and self-published.  This new series will look at the cards of the Tarot deck and their many different visual representations, starting with the Fool.

The Fool, the Meaning of the Card

The Fool is the protagonist of the narrative that is the journey through the Major Arcana and the four suits of the Minor Arcana.  Think of each card as a chapter in a story. The main story is the Fool’s journey through the Major Arcana, beginning with the Magician and ending with the World.  The Magician represents paths and choices, the intersection of fate (paths) and free will (crossroads, where choices can be made).

Each subsequent card is a karmic, moral, or archetypical lesson for the Fool until he or she arrives at the World, which is the culmination of a significant learning cycle.  Think of each grade of primary school and each division of segments of education.  The primary school in the United States begins with 1st grade and ends with 6th grade.  The World “moment” arrives when a child ends a grade level and moves to the next grade.  The larger World “moment” occurs when the child leaves primary school for middle school (grades 7 to 9), and then high school (10 to 12).

A World 1st grader becomes a Fool 2nd grader, and so on with each major life transition.  A World single person becomes a Fool married person, just as a World parent becomes a Fool grandparent.  Each layer of development is supposed to teach wisdom and knowledge by the time you get to each World moment.

The Fool’s journey through the Minor Arcana represents lessons based on specific aspects of human nature: Swords/Air/Intellect, Wands/Fire/Creativity, Pentacles/Earth/Money and Career, and Cups/Water/Emotions.  As the journey from the Magician to the World, the Fool takes 1 to 10 steps, coming back to the 1st step at the end of the 10 steps.

The court cards, traditionally the Page, Knight, Queen, and King represent different personality types and roles the Fool can learn or identify within his/her life journey, either as someone like one of these types or by encounters with other “Fools” who clearly represent a court card type.

Essentially the Fool represents many aspects of the necessity of “throwing ourselves foolishly” into life.  Trust, fearlessness, curiosity, and the joy of living are energies the Fool brings into the world and should use to navigate it.  The basis for the original card is the court jester, who was considered the most powerful and least powerful person in the realm.  He was the most powerful because he could challenge the king and queen, and the most powerless because he held no station or title. 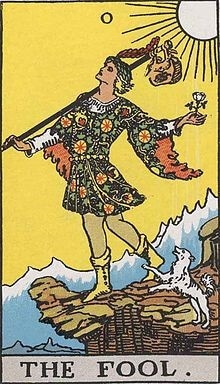 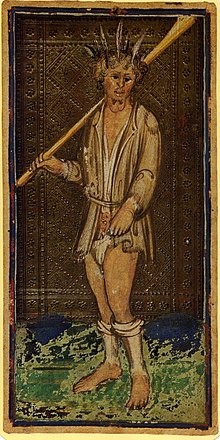 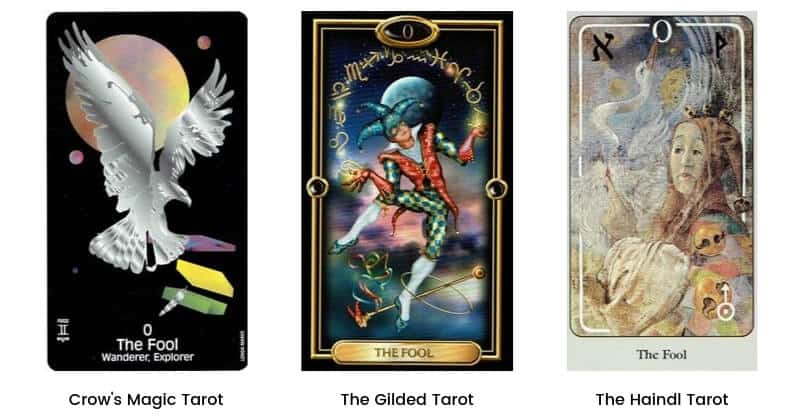 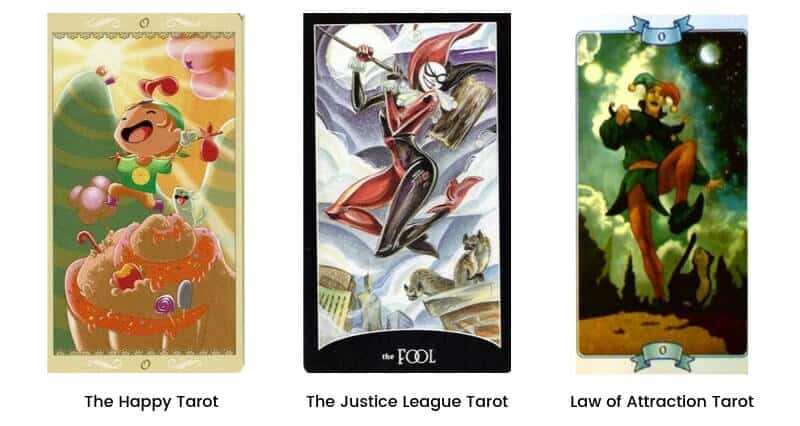 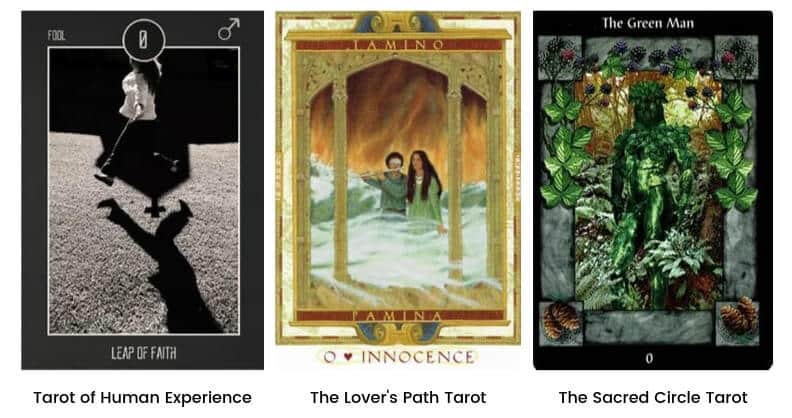 As you can see, many of the cards consistently show an image of someone leaping, dancing, or “walking jolly”.  Other cards choose to keep the essence of the card but show the visual in a completely different way (Crow’s Magic, Lover’s Path, and Sacred Circle).

If you happen to draw the card in a reading, regardless of the question and subject, you will be “asked” to behave the way the Fool would act.  Perhaps your question is, “should I stay in my marriage?” You draw the Fool. Each circumstance will be different, and the Fool may be telling you that you are Fool to stay or a Fool to consider leaving, but you are not and should not be afraid to ask the question.  The Fool often encourages us to do the unexpected because that helps us grow.

In asking the marriage question, which would be more unexpected of you, staying or leaving.  Which would teach you the “newest” lesson.  If you know the pattern in staying, the Fool will encourage you to look for a way out as a lesson.  If you know you need to stay, but you need to do something “foolish” to shift the energy and complacency of the marriage, then what crazy thing could you do?

Tarot cards rarely give a single answer because people asking the question are radically different, as are their circumstances.  Often hidden in the simplicity of the question is an important context, such as, “should I leave my verbally abusive marriage and take my 2 young children with me?”  or “should I finally leave my marriage of 20 years now that my last child is off to college?” or “should I leave my marriage to become a monk or nun and shun the carnal pleasures of human intimacy for spiritual purity?”

And in each of those cases the Fool may be saying, “yes, leave” or “no, you would be foolish to leave”.  Karmically and spiritual speaking there may be a FOOL (all capital letters) reason for staying in the abusive relationship; plenty of people do, and for reasons, painfully, not foolish and sadly practical. Whatever the question and interpretation of the answer, the Fool does tap into one consistent energy, faith, shown in several cards above as a “leap” forward without looking down.