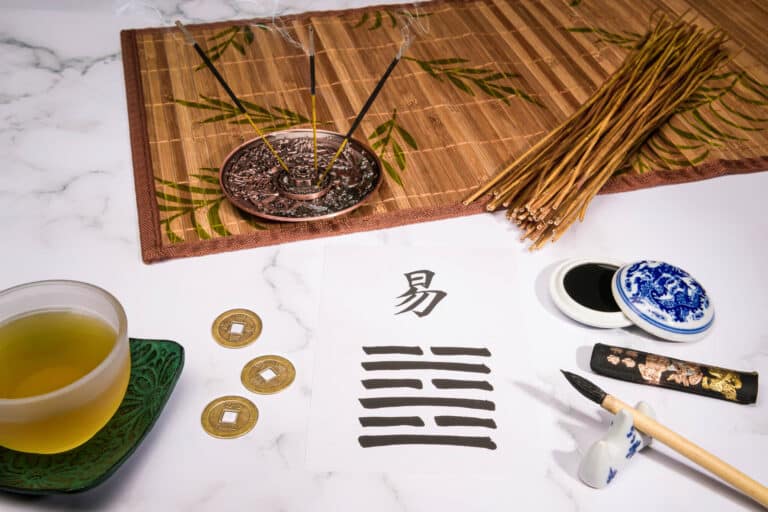 Divination is the practice of discerning the future by providing it a symbolic container through which it may communicate itself. Divination works by way of the Law of Attraction. The diviner poses a question, establishing a point of focus, and allows the influences that are relevant to constellate within the medium of the scrying tool.

Many tools have been used for scrying materials, including the entrails of animals, bird formations in the sky, tea leaves, coins, cards, yarrow stalks, runes, stones, plants and even body parts. Patterns emerge through the chosen material, and are decoded through systems of symbolism or philosophy.

Any system will tell us something, for everything is alive, and everything is communicating to you something about yourself. But there are some oracles which are rooted in systems of profound philosophy whose inherent wisdom is invaluable on its own terms; when we consult these oracles, the information about our future is the least of what we learn.

The I Ching, or Book of Changes, is a study in the law of change, or tao. The ancient sages observed that nothing exists in a static or unmoving state, but that everything is in a ceaseless process of transformation. The only Universal truth that we can count on in our world is change; nothing is static, nothing lasts forever, and everything is in the process of turning into its opposite.

Tao, which literally means “the way”, is the alternation of Creative and Receptive, or firm and yielding. This process of intermingling opposites accounts for all earthly phenomena; these two primordial principles— also known as yin and yang— are either in a marriage or in a war, either in harmony or in disharmony, and in any case, are changing from one into the other.

Change, understood in this way, is a natural process practically identical with life. Life is the product of the polarity between the active and the receptive. Every manifestation of change, every stage of evolution of any process, is an adjustment of the tension between these cardinal principles. If this state of tension were to cease, life could no longer express itself.

When one casts the yarrow stalks or coins of the I Ching, one transcribes accordingly, constructing a figure that consists of broken lines (the yin, Receptive principle) and solid lines (the yang, Creative principle). Three of these lines make a trigram, of which there are eight.

These 8 trigrams render spiritual actualities in images of the natural world.

The Book of Changes describes the cycles of polarity within which all life finds its expression, using earthly phenomena seen in Nature to describe the eternal interplay of yin and yang. These images are held to be in a state of continual transition, one changing into another, just as transition from one phenomenon to another is continually taking place in the physical world. The eight trigrams therefore are not representations of things, as such, but of their tendencies in movement. The eight trigrams do not so much represent the phenomena of the natural images, but the animating spirit of those phenomena.

Thus they are also referred to as qualities:

The diviner asks his questions until he has received six lines, or two trigrams, which forecasts the answer to the question. There are 64 hexagrams in the I Ching which contain all possible situations in life.

The reading is delivered through metaphors of nature by describing how the two trigrams interact. The basic elements of the situation are revealed, and by understanding how these principles tend to move, operate and change when they meet one another in a certain sequence, we can discern what is coming next.

The Unfolding of Fate

By exploring the laws of nature to the deepest core, the ancient sages thus arrived at an understanding of fate. By studying the order of the outer world, and observing the patterns of change which obtain and recur eternally, the sages were able to discern what was coming next.

Ironically, working with oracles in this way ultimately alleviates the need of working with oracles. At the same time that the hexagrams reveal to us the meaning and consequences of our current circumstances, so too do our current circumstances initiate us into awareness of the mysterious laws which order the Cosmos. The proper use of these readings can greatly increase our awareness not only of the deeper meaning of the events in our lives but also the fundamental principles by which life can be made to flourish. As we gain a more refined understanding of the fundamental processes of change which revolve upon the manifested plane, we are able to see more clearly for ourselves what is going on at the deepest level of any situation and what is coming next without need of any esoteric art.

At the foundation of the philosophy of the I Ching is the premise that we live in a cosmos, not a chaos. We exist within a definite and unchanging order of some kind, within which certain elements, relationships, and sequences are fixed, even if the product of these fundamental elements colliding may appear as infinite variety.

Within that vortex of possibility, here we are: creatures endowed with free will.

Once a point of interest is introduced to the oracle, we may witness the influences that are active in a given situation, and we can see how the interaction of these factors will play out over time and why. This point of reference makes possible a system of coordinates into which any detail can be fitted.

But at the end of the day, all questions about “what to do, what to do!” really come down to one question: to act in harmony with the Cosmic Law, or to move against it? The I Ching helps us to see which way the natural flow of things is already moving, so that we may understand how to fit ourselves most harmoniously into the grand scheme of things.

It is said that the laws of heaven and earth are reproduced in the Book of Changes— but because man is a microcosm of the Universe, these then are also the laws of our nature. In this ancient book of wisdom, each of us is provided with the means of shaping our character so that all inborn potentialities for greatness can be completely realized.