The History of the Ouija Board

Home » Blog » Psychic Readings » The History of the Ouija Board 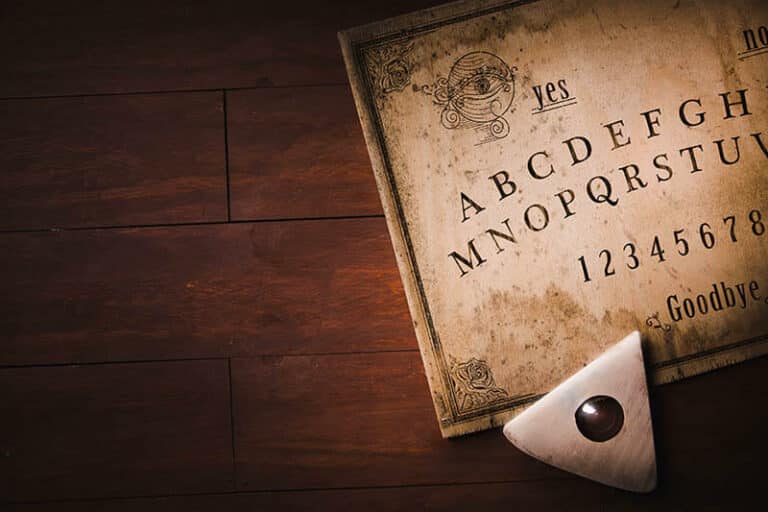 Ouija Board – psychic revelation or simply old-fashioned fun? Either way, its history is fascinating! It’s also a fun way to test your own psychic potential or perhaps hone the psychic gifts you’ve already discovered.

It All Started in Pittsburgh Pennsylvania — Or Did It?

February 1, 1891, a newspaper ad was placed by the Pittsburgh-based novelty store, Danziger & Company. No one knew it at the time, but this little print ad would start the Ouija Board craze that is now considered a classic in American culture. I mean what American hasn’t heard of the Ouija Board? For many Americans growing up, the Ouija Board was considered taboo. It was an iconic counterculture scoffed at by parents and grandparents (unless you had cool ones), so of course, every kid in America wanted to try it out!

Ouija Boards were the star of spooky high school slumber parties and late-night college get-togethers. They were also the central attraction for “girl’s night” for multiple generations. Even today, more than 120 years later, the Ouija Board is still a household name, and yes, still a bit taboo. The Ouija Board is being taken more seriously now as Americans become more psychically aware and receptive to the Spirit World.

The original 1891 ad was placed in the upper right-hand corner of the twelfth page of the Pittsburg Dispatch. Under their big star logo, a headline read:

“OUIJA, or, The Wonderful Talking Board.”

It then goes on to say, “The Ouija is, without doubt, the most interesting, remarkable, and mysterious production of the nineteenth century.” It also states that the Ouija answers questions from the “past, present and future with marvelous accuracy.” The ad claimed the Ouija Board formed the “link which unites the known with the unknown.” While advertisements in the late 1800s tended to be more flowery than today’s ads, this ad stood out even for its time. It sold for $1.50 which in those days was no small sum but they basically flew off the shelf because curiosity is a powerful force.

Danziger & Company may have been the first store to place such an ad but it was the Kennard Novelty Company to first circulate the idea of an “Ouija” Board, to manufacture it, and to get the patent (more about that below). The founder of the company, the man who took over the company later, and the lawyer who got the patent have all been cited as the “inventor” of the Ouija Board, depending on the source. However, none of these individuals actually invented the concept of using a board containing the alphabet, numbers, and “yes” and ‘no” to communicate with the spirits.

Where Did the Original “Talking Boards” Really Originate?

Ouija Boards, as we know them today, were an outgrowth of the Spiritualism Movement in America, England, and the rest of Europe which took place during the 1800s. People in this movement believed they could communicate with the dead. This also led to seeking advice from the spirits on all sorts of matters, from personal to political.

Psychic led séances were all the rage during the 1800s and some psychics were known to use “talking boards,” also called “spirit boards,” for communication with the spirits. In other words, while they weren’t called “Ouija” Boards until Charles W. Kennard, an entrepreneur in the fertilizer business, thought about mass producing them and getting a patent. Spirit Boards during this time period were also used as a sort of “do it yourself” séance, a way for a family or a few close friends to get together and commune with their departed loved ones.

And Guess What? Spirit Boards Actually Go Back Much Further!

In the 1800s, spirit boards were made from a flat piece of wood, engraved with the alphabet, numbers, and other symbols and words. A smaller piece of wood called a planchette was used as a pointer to allow the spirits to guide the medium’s hand to spell out words or numbers. Yes and no questions could also be answered this way. This is a specialized type of “spirit writing” or “automatic writing” where the person(s) touching the planchette is serving as a medium through whom the spirit “writes” a message.

The precursor to the spirit boards go back to China, the origin being sometime between 900 and 1100 A.D. Instead of a wooden board, flat boxes of sands were used. Sticks were used to move the planchette and spell out Chinese characters by passing the sand through a sieve. The sticks were made from bendy wood, such as willow branches or peach branches, similar to a dowsing rod. Certain Chinese characters were associated with this type of “spirit writing” such as the character for a phoenix bird. As one person served as the medium who moved the stick/planchette, another person interpreted the symbols and wrote down the message.

Elijah Bond was an early investor in the Kennard Novelty Company, the original manufacturer of Ouija Boards. He was also a lawyer and was tasked with getting a patent on the “Ouija.” On May 28, 1890, he filed for a patent on the board. However, none of the patent clerks would give him a patent because they did not believe it worked.  Of course, having a patent would offer proof to potential buyers that the board did indeed work so Mr. Bond did not give up easily.

Luck would change for Mr. Bond when he brought in his sister-in-law, a talented medium of some renown, to demonstrate that the Ouija Board did in fact work. The chief patent clerk told them if they could use the board to determine his first name, unknown to them at the time, he would give them a patent. They went to work placing their hands on the planchette and asking the Spirits to spell out his name on the board. When they got it correct, the chief clerk’s face was reported to have turned pale, as if he had seen a ghost. True to his word, he did issue them a patent immediately and then immediately left the building visually shaken by the experience.

Robert Murch, a historian, and collector of antique Ouija Boards, searched for years to find Elijah Bond’s gravesite. He was buried in an unmarked grave in Green Mount Cemetery in Baltimore, Maryland. When he finally found it, he raised money for a large and stately tombstone to be placed on his grave. On one side of the slab, the engraving was that of the original design of the Ouija Board. It is so unique, it has now become a popular tourist attraction.

Ouija Board parties can be an entertaining way to spend an evening with family or friends (just take the necessary precautions if you do so during the Covid-19 pandemic). However, while you may go into it thinking that it’s just a fun parlor game, don’t be surprised if you come away as a true believer in the Ouija Board as a serious divination tool. Remember, the spirits can speak to you through an Ouija Board just as easily as they do Tarot Cards!

Don’t believe me? You can purchase an Ouija Board online for less than $20 and find out for yourself. Don’t worry about being too “woo woo.” After all, America has been so obsessed with the Ouija Board for more than a century. In fact, it even outsold Monopoly! And… what do you have to lose? If you do decide to experiment with an Ouija Board, try to keep your mind open to all possibilities. Even if you don’t succeed, you’ll surely have a lot of fun trying. But above all, be receptive to the gifts your mystifying oracle gives you 😉