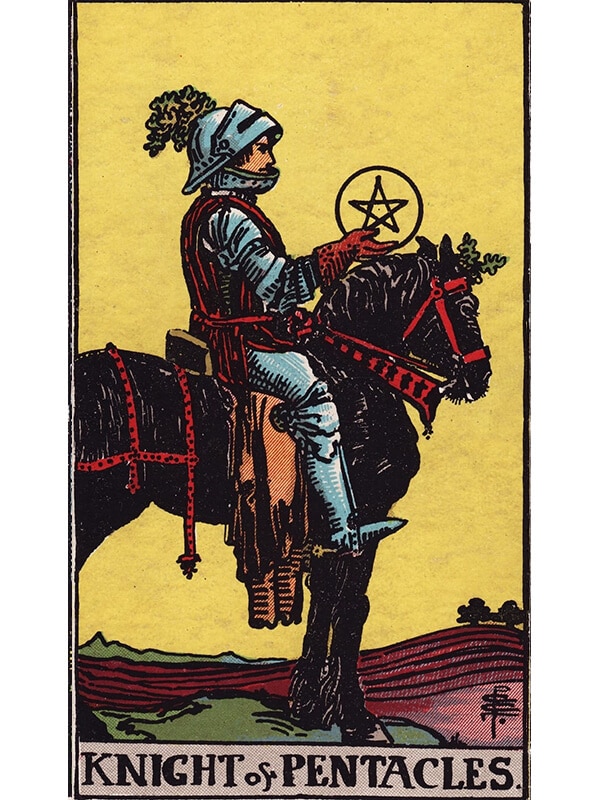 Don’t expect anything wild or unusual when dealing with a Knight of Pentacles. Representing the active aspect of the element of Earth, it condenses the stability and reliability of this element. A dedicated conservative, he will shy away from anything that differs from the norm and can be a little close-minded at times.

He is, however, incredibly loyal and devoted to his family and loved ones, and will take a bullet for them if needed. He might not be the one to go to when you want to do something wild and unexpected, but he is definitely someone you can count on.

As an embodiment of the element of Earth, the Knight of Pentacles is holding his ground, ready for anything. His heavy black warhorse is calm and obedient, and his armor is heavy and protective. He seems to be standing on top of a hill, like a leader or a tactician reviewing the field to adapt his plans and anchor theoretical concepts within the real world.

Like the Page of Pentacles, he is holding the symbol of the suit of Pentacles rather lightly, resting in his right hand.

Echoing the stability of the element of Earth – Virgo zodiac sign, the Knight of Pentacles meaning is closely tied to order and discipline. He will suffer no idealism or wild concepts, instead of focusing on practical matters and anything that is tried and true.

The Knight of Pentacles often represents a middle-aged conservative man, one that might embody the traditional archetype of the family man who drives a large sedan or hatchback, put his savings on low-interest guaranteed investments, and probably has some sort of sweater tied around his neck.

In love, the Knight of Pentacles is a reliable family man, someone that will never bring any spark of spontaneity to the couple, but who will be extremely loyal and protective of their own family. The Knight of Pentacles also cares about his reputation, so will usually try to represent some kind of perfect ideal and do their best to resemble the Hollywood cliché of the suburban family man.

Career encompasses school and education if that is your current stage; work that is necessary, but not what you would consider a career path; and your actual career path. Regardless of your current stage of development, the Knight of Pentacles represents the well-worn path to success.

If you are a student and this is your card, then you want to determine the path other successful students have taken before you and follow that path yourself. If you put in the hard work, check the proper “tick” boxes, and keep on the straight and narrow path, you will succeed.

If you are doing work that is necessary, but not a career, then you want to embrace and enjoy your routine. Doing your job well, day in and day out will give you the greatest satisfaction and most reliable rewards.

If you are in your career, then the Knight of Pentacles represents the mundane activities you or your employees must do to make the company successful. Between the “big moments” are hundreds of little routine moments that must be completed efficiently to ensure long-term success.

This over-reliance on conservative values and viewpoints can be one of the largest downsides of the Knight of Pentacles, which come to the surface when it appears reversed in a reading. It might represent outright refusal to steer away from the beaten path, ignoring any chance to improve or alter “something that works” when faced with even the slightest chance that things might go wrong.

As such, a reversed Knight of Pentacles can be the embodiment of stagnation, ignoring any potential progress, and leading to the eventual entropy and collapse of any system. But the most common downside of the Knight of Pentacles is that, more often than not, this craving for routine and stability will make him an extremely boring person.

Reversed, this card indicates a boring routine or lack of passion is hurting the relationship. You may be feeling it inside or from your partner. Time to break the routine if you want the relationship to continue and to thrive. The over the pursuit of routine, safety, or habits will leave the relationship feeling joyless and inert.

When this card appears reversed in a question about school, work, or career, then you may be holding on too tightly to a habit or pattern in your studies and work actions that are limiting you or leading to failure. While it may be uncomfortable to face change because “this is how it has always been done”; unwillingness to change is already producing negative outcomes. They will only get worse if you remain stubbornly fixed on your current path.