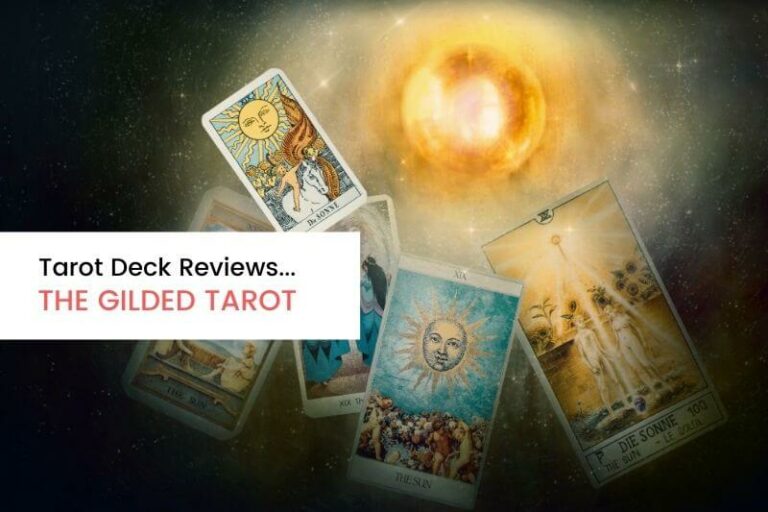 Newly published tarot and oracle decks arrive on Amazon, Etsy, crowd-funding platforms, and in bookstores every month. Today there are literally thousands of decks to choose from, including out-of-print decks as well as published ones. Reviewing a deck is a subjective judgement intended to help readers determine if they want to own the deck.

The critical review of a deck for askAstrology involves looking at the quality and size of the cards, visual accessibility of the art, quality of the companion text of the deck, and potential usefulness in professional practice. This month I have chosen to review the Gilded Tarot by Barbara Moore (Author) and Ciro Marchetti (Illustrator).

Myths, fairy tales, and legends have played out their timeless themes for millennia in that magical twilight realm of the imagination, somewhere between fantasy and reality. The Gilded tarot invites you to explore such an enchanted world where ageless symbols and archetypical themes come to life as fair maidens, bold knights, and sage mystics.

Award-winning artis Ciro Marchetti created this visionary tarot using cutting-edge digital art techniques. Using the popular symbolism and structure of the Rider-Waite Tarot as his muse, he has created this vibrant twenty-first century reimagining of one of the most well-known and widely studied tarot decks.

The accompanying guidebook teaches you how to read the cards. You’ll learn everything you need to give accurate and insightful readings. Let the enchanting cards of the Gilded Tarot transport you to a world of magic and wonder.

The deck has striking images that perfectly capture the fantasy feel of a past age.

The card stock of the deck is average quality for the 2004 edition and will need to be replaced with regular use over time. The new editions, listed as Gilded Tarot Royale, have better card stock that will hold up longer, even with regular or heavy use. The cards are larger than standard playing cards, but not so large that they are hard to hold in your hands. Because the card stock for the new editions is sturdier, the cards can be a little stiff and hard to shuffle when you first get them out of the box. Over time and with regular use, shuffling will get easier.

The deck artwork is visually accessible, making it very easy to understand and interpret the meaning of every card. As you can see from the sample cards, the artist’s imagination is wonderful. The deck does an excellent job of capturing the fantasy and historical themes that are valuable even today. Below are some sample cards and their meanings.

The message of Judgement is clear. You are being called to do something. You might not want to hear it and are actively drowning it out with noise of your daily life. You might be afraid of the call and the changes it will bring. Listen to it and face it with courage and action. It promises a more fulfilling life.

Be aware of two things: First, of ignoring the call or shirking from it in fear or obstinance; second, of mistaking the desires of others or of society for a true calling. Do not feel compelled to dance to anyone else’s tune, and do not ignore the music of your own heart. (77)

You not only have gifts at your disposal, you are being offered another at this moment. At the expense of current happiness, you are focusing on an idealized concept that does not exist. Be aware of the reverse, and do not let go of healthy ideals that guide and shape your life for a shabby substitution. You must know the difference between convictions and fantasies. (95)

A wooden chest of pentacles lies under a tree. A ferret peers over the edge curiously. A turtle makes his slow way past, rather unconcerned with the whole affair. Whose chest is this? Why is it unattended and open? Aren’t they afraid someone will take them? Evidently the owner isn’t too concerned. Since this is a ten, it reflects the Wheel of Fortune, Major Arcana X, and the end of a cycle. Whoever owns this chest probably left it for someone else to find. That has a nice, unified feel to it: they left a chest of pentacles to repay the universe for the single pentacle given to them long ago in the form of the Ace of Pentacles. (116)

After an overview of tarot basics, you’ll learn meanings for all the cards, starting with the Major Arcana, followed by the Minor Arcana and, lastly, the court cards. The last chapter will give you a few spreads to try for yourself.

Each card of the Major Arcana gets a page of text and has notes page for you to put down your own thoughts about the card. The Minor Arcana descriptions are not as long, and there are no notes pages for the cards of the suits. The book concludes with a variety of spreads, all worth trying out with your deck.

As a professional reader who started reading cards for pay in 1992, I can say that this deck is excellent when it comes to reading for clients. While the cards do not have key words, and the imagery borrows from the Rider-Waite deck, which uses a historical period most readers may not be familiar with, the vibrant image makes it easy to memorize the meanings when you study the cards.

I would recommend the deck for personal use, collecting, admiring the artwork, and professional use. This deck has beautiful artwork for public and professional work. The guidebook that comes with the deck is thorough, and Barbara Moore is an excellent writer.

The deck is a visually accessible and beautifully drawn, and one that I will give a high rating, five out of five stars. I have used the deck in public settings and private consultations. The cards provide keen insights and clients appreciate the excellent fantasy images.

The Meaning Behind Repeating Numbers