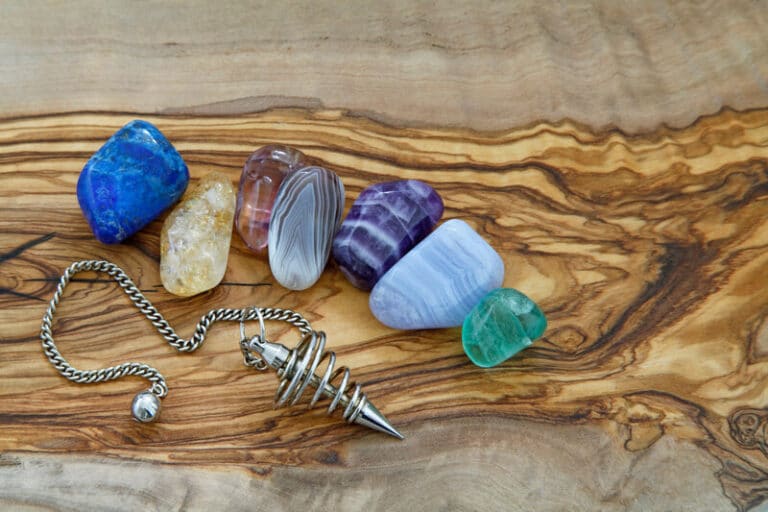 A talisman is an object endowed with magic powers. The word talisman originates from the greek word ‘teleo’ meaning consecrate. Through a process of consecration, an ordinary object may be transformed into a vehicle for magnetic forces which cause changes to occur in accordance with one’s desire or will.

Talismans can be made to affect all sorts of things: to protect one from evil forces or misfortune, acquire money, summon good luck, recover lost property, influence people, obtain knowledge, attract love, amplify charisma, and many more besides.

An object which is to be used as a talisman is first purified so that the mixed magnetisms it has picked up in its travels are banished from it. Then by will and focused thought, a fresh charge of living energy is poured into it and this charge of energy is stored in the material.

Anyone wearing the talisman will be affected by it and tuned to its vibration; they will tend to feel think and act in accordance with the intention of the maker of the talisman.

This implantation of a vibrational “message” of sorts happens by way of the aura of the object. The aura— the energetic sub-plane of the physical world— is an electro-magnetic field made of an etheric substance known as Akasha or astral light. This substance is the raw material of magic and is a point of contact between mind and matter.

Every manifested form has certain modicum of akasha, some more and some less, and this akasha is the transmitter of messages of the mind. The akasha is first molded by the emotions of the occultist; in its turn it will influence the other etheric sub-planes like light, heat and electricity.

These forces then influence dense matter, attracting sympathetic energies and repelling incompatible energies, according to the purpose it was given by way of the “message” conveyed through the akasha.

Those people, objects and situations which harmonize with the energy of the talisman will be drawn into its field, while those incompatible with its purpose will be repelled or blocked out.

In order to create a talisman, one must be in a very heightened emotional state— having a heart inflamed with prayer, in the words of the alchemists.

In order to make this ordinary object into a sacramental one—that is, “the outward and visible sign of an inward and spiritual grace”— the one making the talisman must lift up his heart and mind to the highest concept he can mentally reach and there for a brief moment realize the particular virtue for which the talisman is being made.

Often to this end, invocations to certain deities, saints or spirits are made who represent or embody the particular virtue the talisman is designed to help inspire in its maker.

When a magician is charging a talisman, he may for instance recite the names of saints who in their earth days were the channels of the divine force with which he desires to infuse the object.

Naming them with intention links him with their psycho-magnetic trace in the astral light; or, in Jungian terms, allows the archetype to come to life within the human.  Being successfully invoked, these angelic or exalted consciousnesses strike down with a momentary flash upon the consciousness of the magician who is charging the object.

The talisman will now be linked through the mind with the divine power it is designed to evoke, as well as to the creator of the talisman.

When the occultist performs operations on the physical plane it is the etheric body or aura he is working with— not dense matter. Material objects or substances are therefore chosen solely on account of the etheric element in their composition. Some substances are more “etheric” than others.

Crystals, for instance, are understood to be the most magical of physical substances because they contain the most akasha of any inanimate object. Pure metals are similarly powerful, while alloys or any composite substance are practically useless from the occult point of view because their etheric double does not form a cohesive whole but is of two types of vibration.

For this reason, the ancients constructed their charms and amulets with highly refractive crystals and pure unalloyed metals. That their faith in these substances was not rooted in pure superstition is proven by the fact that modern-day electricians also require pure unalloyed metals in batteries and circuits.

Similarly, crystals are an integral part of radios, computers, smartphones, watches and lasers. These substances are used because of their superior and unique ability to carry and transmit the vibrational messages of electro-magnetic currents.

There are certain systems of correspondences which are also used to select the material that is most compatible with the nature of the force concerned. For instance, if our aim were to inspire martial power or energy in sports, we might choose iron or steel, since this is the metal associated with Mars.

One the other hand, if we wished to ease emotional stress, we might choose copper which is the metal of Venus. Water is a very powerful talismanic substance because it is highly receptive, though it must be immediately used for its magical purpose, because it quickly loses charges.

Paper, oil and clay hold magnetism powerfully, while silk and glass are both bad substances. In fact, silk is often used to wrap up a completed talisman in order to preserve its charge.

The best talisman is one which you make for yourself, and this is because sustained attention to it will transmit your message through the akasha in a more impactful way.

The more time you spend carefully manufacturing this object, deliberately selecting the substance, contemplating its purpose, meditating upon guardians, deities or symbols of its meaning, the more powerful its effect will be when it is finally consecrated.

Once a talisman has been charged it is linked with the one who has charged it and it is necessary to break this psychic link if the operator does not wish to be linked anymore.

Each talisman is personal to the one for whom it was made and cannot therefore be simply passed along to someone else suffering from similar trouble. Second-hand talismans can cause much trouble, for however similar two people may consider their predicaments, their diagnoses may be entirely different.

If you feel you have completed a cycle of time with a talisman, you may bury it, place it in moving water, or burn it completely in a fire, all of which will de-magnetize the object and complete your spiritual contract with one another.