This article will look at one of these dynamics happening between two points this month, Sun in Sagittarius squaring Neptune in Pisces. When two points “square off” with one another, they challenge and compete with each other.  The point of life energy will challenge the point of mystery and surrender.

The Square, and the Sun and Neptune

This month, when the faster moving Sun reaches 15 degrees 57 minutes (15d57m) of Sagittarius, it will square Neptune at the same degree, but in Pisces, at 3:45 am EST on December 8th.  The impact of this relationship begins to be felt up to 3 degrees before and 3 degrees after the exact aspect and is known as the orb of influence.  When the faster moving body approaches, the aspect is said to be approaching and is building energy.  Once the exact aspect has passed, the aspect is said to be separating and is losing energy.  The duration of this particular aspect will run from December 5th to December 11th. 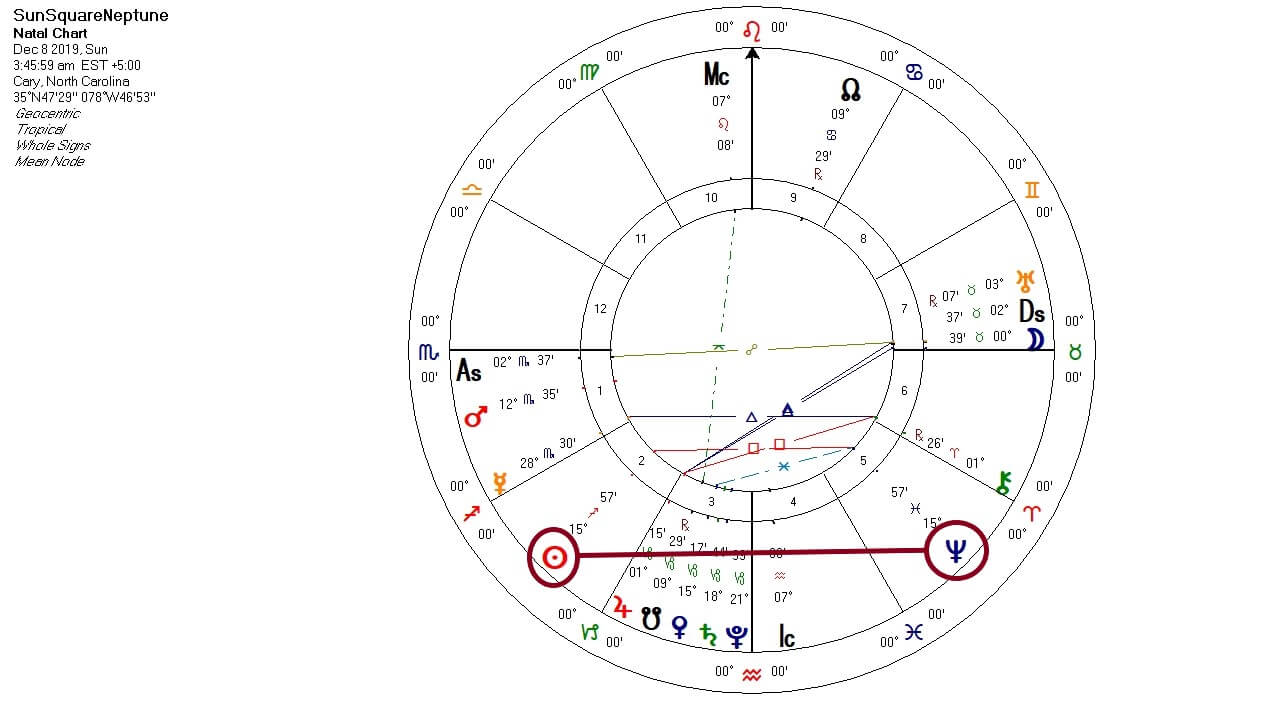 The Sun represents our life path, the energy of our identity, and the drive to survive and thrive.  The Sun rules Leo and the 5th House of Creativity.  The 5th House oversees love affairs, creative action, leadership, children, and play.  Which sign and house the Sun occupies in your chart indicates the way you need and want to follow your life path and where you want to focus on the core of your energy.

With the Sun moving through Sagittarius at this time, the keynote is, “the power of individuality manifests through wisdom” and the symbol is, “an eminent theologian lectures at a university” (Astrology: The Divine Science, Moore and Douglas, 142). Jupiter is the ruler of Sagittarius and it is currently in Capricorn, so the Sun’s energy will be concerned with outcomes and results.

The Sabian Symbol is 16 Sagittarius, “seagulls watching a ship”.  From the book, The Sabian Symbols, author Marc Edmund Jones says, “this is a symbol of the spirit’s demand for its full share in the privileges and rewards of human society, and of the individual’s realization that his personal interests are served only as he maintains an unceasing vigilance in his own behalf”.

He assigns the keyword as ALERTNESS. Further, he says, “when positive, the degree is a gift for recognizing every opportunity at hand, and when negative, aimless expectations” (197).

With the Neptune moving through Pisces at this time, the keynote is, “the power of spirit moves through all individuals” and the symbol is, “a beggar and a wealthy person share food and philosophy on a park bench”.

The Sabian Symbol is 16 Pisces, “the flow of inspiration”. Jones says, “this is a symbol of the spiritual power which the development of civilization has brought to a point of practical potentiality, and on which each person may draw in meeting any and all critical issues of everyday living”.

He assigns the keyword as INGENUITY. Further, he says, “when positive, the degree is exceptional capacity for meeting the unusual developments on every level of human experience, and when negative, delusions of cleverness and contempt for real effort” (315).

The square aspect seeks to challenge energies to force growth; points “encounter each other” from disparate elements, in this case, fire and air.  During the period of this square, the point involving life’s core energy and the point involving mystery and surrender will test each other. This square is likely to be somewhat “elusive” since both points are in mutable, adaptable signs.

Sun in Sagittarius is concerned with the core beliefs and philosophies we use in our daily lives and encounter in our interactions with the wider world.  Neptune in Pisces is spiritual vision, dream guidance, illusion, and disillusion. The strain comes from how our philosophies and beliefs struggle to define what cannot be defined, which can lead to profound insight and understanding, or madness and dementia.

Sagittarius likes to study, experience, and master any subject or skill that interests it, so with the Sun moving through this sign, you will feel your beliefs strongly enough that you think everyone else should feel them as you do, and in the same way.  Unfortunately, some of the most fundamental beliefs you hold will NOT remain standing against the waves of Neptune’s ocean.

If you have built your sandcastle, and all beliefs are sandcastles, at low tide, then Neptune is going to come in and wash it away.  If you build it at high tide, then your sandcastle will be standing after Neptune brings the tide in.  The defining moment for many of us will be when we realize that we built our sandcastle somewhere between high and low tide and we have to watch as it (and they, the beliefs) get washed away.

Your ability to let go of your sandcastle loss or destruction will be every bit as important as where and how you want to build your next sandcastle, or if you just want to step back and watch the ocean come in and go out until Neptune enters Aries, where greater energy will exist to build new sandcastles.