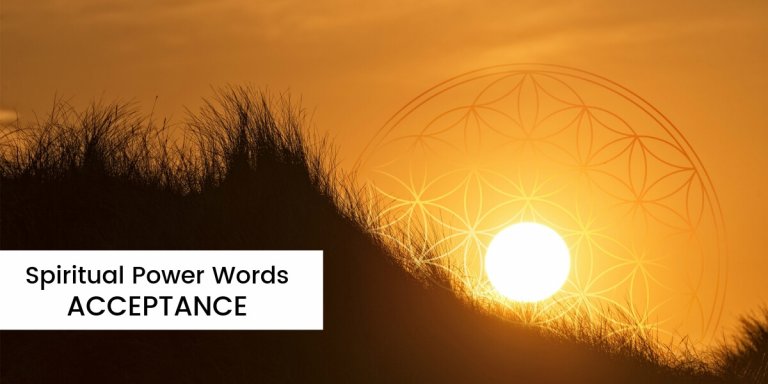 Spirituality is a powerful term encompassing a way of thinking about, feeling, and living in the world. Essential to spiritual life is mindful thinking and choosing to experience the many different aspects of human existence and conscious interaction with others and our environment. With a spiritual view of life, we can see the divine in the mundane, the miraculous in each and every day, and the extraordinary in the ordinary. This monthly series will focus on the spiritual power of common words and the concepts they represent.  This month’s word is ACCEPTANCE.

The Mundane Meaning of Acceptance

Acceptance is defined as being “the act of accepting something or someone: the fact of being accepted: APPROVAL”. We seek and pursue acceptance in our relationships, our desires, our limitations, and our reality.  Acceptance happens on a daily basis, in small and large examples. But what does it mean to “spiritually accept”?

The Spiritual in Acceptance

I have a quote I share with my clients that will appear in the various articles I write, at one time or another, which is, “nobody gets their character tested when things are going their way.” Spiritual acceptance occurs as an epiphany, a sudden insight that lets us see, process, and absorb a truth or understanding that we have been resisting, ignoring, or failing to understand.

To be spiritual with this concept means constantly assessing what we need to accept at any given time in our lives and then trying to move into that acceptance with gratitude. This shift is not always easy when you may have to accept limitations, losses, or differences that keep you separate from people you want to connect with.

None of us escape the changes that aging brings on, but too often we resist this change to our detriment, and often it becomes a cause of injury or illness.  I used to be an avid basketball player, playing as often as I could while in college and well into my 30s. I was holding steady at a certain level until one game when I was 36.  I was guarding a much younger player whose skill was very similar to my own.  While playing I noticed I had “lost a step” and suddenly realized it was a permanent loss.

At the time I was working for a major university so pick-up games were played in one of the gyms pretty much all day long.  The gym had 8 different courts, which players identified by letters. The A court had the best players, even some of the school players would play on that court; it was easy for me to accept that I could not play on that court. At my peak, I could be the 9th or 10th player on the B court and the best player on the C court. On the day I realized I lost my step, I had to accept that I was going to be a mid-level player on the C court going forward.

I meet clients at very hard times in their lives, and loss is a very common theme – a lost job, a lost relationship, or the loss of a loved one.  What makes acceptance the challenge in these situations is the common factor that the loss occurred “outside” their control.  The company they were working for was mismanaged had to let them go or closed immediately, a close friend moved far away and chose not to keep in contact, or a loved one died unexpectedly. Spiritualizing acceptance means acknowledging that a loss is a necessary change that we need for soul growth.

The most common loss for me has been through relationships.  I have left some and I have been left.  Some of the ones where I was the one left were not terribly difficult to accept, but a few were extremely painful, but I found over time that the sooner and more deeply I accepted the loss the faster and more profound was my healing process.  True acceptance of loss is an essential healing component and it is never easy to embrace, but “holding onto the loss” becomes self-destructive over time.

We are all similar and different in many ways, but not to the same degree. It is the degree of our sameness and difference that gets us accepted or rejected, either on small and large scales or with various degrees of intensity. Accepting oneself can be a lifelong challenge if who you are is rather different from the majority.

Over the years I have met people with some profound differences in their sexuality when compared to the heterosexual norm, even within the heterosexual group.  Homosexuality is the most common outlier and generally represents less than 10% of the population. Any hope for acceptance out in the world begins with acceptance from within, which can be very hard if a negative viewpoint about homosexuality was formed before the person identified his or her sexual orientation, which is not uncommon for people growing up in certain religiously oriented households or societies.

Acceptance for What is Hard

To be spiritual about any mundane concept really means embracing that concept where it touches our fear. Spiritually speaking, I do not want to just tolerably accept difficult experiences in my life, I want to understand them spiritually and use that knowledge to grow through each change positively.  It is true that most often when we “finally accept” something we can move forward and re-orient ourselves back towards happiness, which will come in the form of a different job, new friendship, or gain from the loss, even the death of a loved one.

Acceptance is the final stage of the five stages of grief, which is the process for dealing with any and all significant losses.  We do not necessarily skip any stages by being better at the act of acceptance, but we can spend far less time in denial, anger, bargaining, and depression if we understand that the ultimate healing goal is acceptance. This work is especially hard, and ironically spiritual when you have to accept that a parent or child is unhealthy for you to be around and you need them out of your life or a relationship that was fantastic in the beginning no longer has the love energy that connected you and the other person.

Hardest of all can be the work to figure out who we are, realizing when we get a solid sense of our core identity that we are VERY different than most of the people around us and we will be rejected by the majority, make them feel uncomfortable, or they will make us feel uncomfortable. All I know for sure is that at the center of every spiritual acceptance I have had to process in my life are two consistent feelings, first relief, then … peace.