The Science behind Solar Eclipse 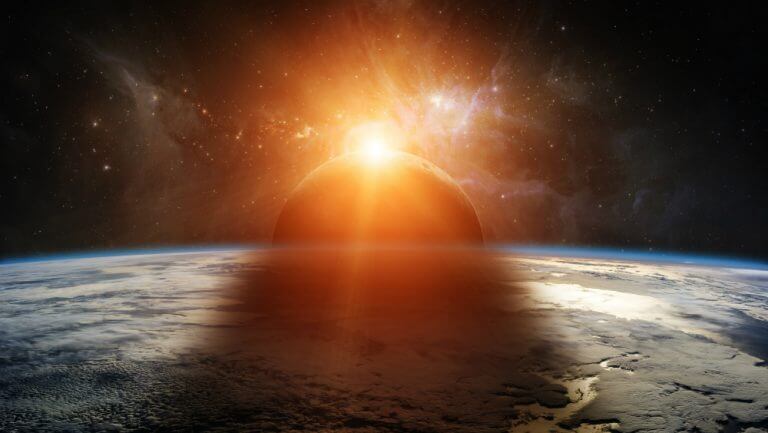 Ever heard of eclipses? You might have. Remember the last time you were running out of your house or up to the roofs of your house to check out something unusual going on with the celestial bodies upon the skies. Yeah, that may have happened because you might have heard about eclipse occurring on that day and you would not have liked to miss that. A solar eclipse is amongst these, and you would know about this, but there is more to this spectacular phenomenon than just an unusual activity! Go ahead and judge the cool science behind it yourself…

What is a Solar Eclipse?

A solar eclipse is an eclipse of the sun and takes place when the new Moon of the month moves between the Sun and the Earth, which blocks out the sun’s light and then casts a shadow on the Earth.  The moon may fully or partially block the light, but since the moon is not so big enough, so the shadow is limited to an area on Earth.

There are types? Well yeah because you might have only heard its name, but there is some serious science involved here. Since the moon has two regions (a central region and an outer region) so shadow that falls on earth maybe from different parts that is why the Solar eclipses have the following four types:

This takes place when the Moon is almost closest to the Earth in its orbit, and it completely blocks out the sun making the day sky dark as nights.

This happens when the Moon only partially blocks the Sun’s surface. During this, the outer region shadow of the moon is cast on Earth, and so the sky may not be as dark as in the total eclipse, or more depends on how much sun’s surface is blocked.

This happens when the moon is not big enough to cover the entire sun’s surface, and so blocks only central region of the sun leaving the sun’s outer region visible like a bright ring of light in the sky. Wow, this is cool!

This is the rarest solar eclipse also known as an annular-total eclipse. This occurs when the same eclipse involves a shift between annular eclipse and a total solar eclipse. The exciting part is that during this eclipse different regions of earth can see one of both eclipses. Well, that is some astronomical science out there!

How often can you see Solar Eclipses?

It is not every other day that we get to experience something so spellbinding about our sun or moon and no one would like to miss it. Studies suggest that normally about two solar eclipses happen each year, but on rare occasions, this number can be five with one in each eclipse season. Five is the maximum number of times a solar eclipse can take place in a year. It has been calculated that on average about 240 Solar Eclipses take place in a century! Now you would like to keep a check on that.

Eclipses are surely very unusual, and if you don’t know, a solar eclipse is unusual enough to have myths around it from all over the world. Let’s check them out.

Ancient Chinese believed that solar eclipses were caused when some hungry space dragon was munching on it.

Korean folks believed that the Solar eclipses were a sign of warning that some dog monster is stealing away their sun.

Similarly, many ancient cultures had their beliefs of the Solar Eclipse as warnings or bad omens, and many had the practice of making sounds and noises to make this demon go away. That is interesting!

In modern days too, people still hold on to some beliefs around this solar eclipse. In many different regions like India, people avoid eating during the eclipse as they consider it impure. Moreover, pregnant women are also warned to stay at homes to avoid bringing any ill wills to their unborn. However, in Italy, Solar Eclipses have a positive image. They believe that planting flowers during this time makes them brighter and grow better.

Does Science bases any of these myths?

Well as anticipated, the answer is NO. The scientist believes that people have these stories created around them out of fear of something strange happening. However, with the technology advancement, we know eclipses to be completely natural. Plus, there is no scientific evidence about any effect of Solar Eclipses on food, health.

Is it dangerous to watch the Solar Eclipse?

As mentioned above, there is no mythical effect of solar eclipses on people, however, watching the sun during a solar eclipse is dangerous. It is advised to not look directly at the Sun, eclipsed or not because the sun’s light can damage your eyes or even cause blindness.

You would not probably want that, and you would not want to miss this mesmerizing scene, so we have just what you need!

So now you know what happens up there when you are running out to watch an eclipse. The next partial solar eclipse is due on 5 January 2019, so you better gear up and mark your calendars because no one, space geek or not, would like to miss such an extraordinary phenomenon!

New & Full Moon Rituals: How to Create Your Own