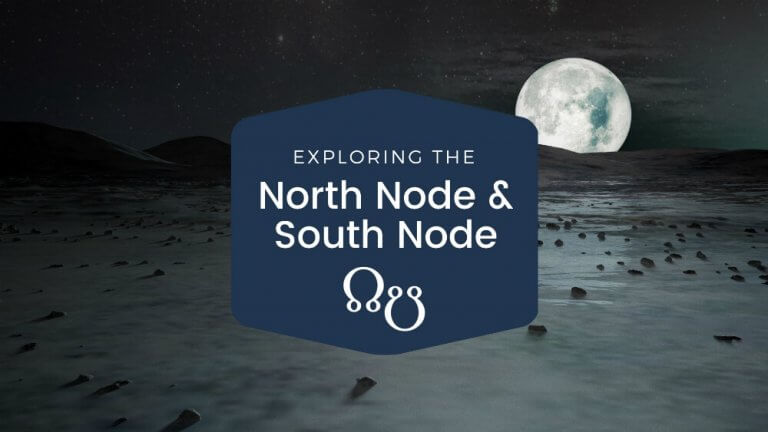 When it comes to astrology, there are probably several terms and ideas you are familiar with: zodiac signs, horoscopes, the impact of planets on your energy, and maybe even your ascendant sign. Some of these aspects appear more frequently than others but when we’re trying to gain a deep understanding of astrology, we must consider every area. One aspect of astrology that many, if not most people, are unfamiliar with is the lunar nodes.

In this article, we will explore what the lunar nodes are. We’ll look at how you can calculate your nodes, we’ll look at some examples, we’ll explore the impact of the nodes, before finally looking at two of the nodes in detail: the north node and south node.

So, what exactly are the lunar nodes? There are two that are of great importance. These are your north and south nodes. We’re going to look at calculating these nodes momentarily, but first, we need to understand what they represent.

A rather simplistic explanation would be that the north represents our future: what we need to become/do in order to find inner peace and tranquility. The south node, which is the polar opposite (in more ways than one), represents the past. It highlights the traits that we’ve brought with us from previous lives. These traits are typically negative, but we hold on to them for security and comfort, falling back onto them whenever life becomes too stressful.

We must understand both nodes in order to begin balancing them out, and we must balance them out in order to bring peace to ourselves. Working on one node but not the other could lead to a state of inner-turmoil or promote an imbalance of energy within our mind, body, or soul. We’ll cover each of these nodes in more depth in a moment, but first, let’s look at how we calculate our north and south nodes.

You only must calculate your north node in order to calculate any of the others, including your south node. This calculation can seem a little confusing at first. Luckily, we have it covered! The infographic below will help you to make the calculation for you. The nodes change sign approximately once every 18 months. It is determined by finding the point where the moon’s orbit and the sun’s apparent orbit (from our perspective it seems like the sun orbits the Earth, which we know is not the case) cross paths at the moment of your birth.

I’m going to briefly give some examples of how the nodes change throughout the year. For those of you born between April 7th, 1886 and December 2nd, 1887, your north node would be Aries with the south node being Libra. If you were born between August 2nd, 1992 and February 1st, 1994 then you have a north node in Sagittarius and a south node in Gemini.

The north node is also referred to as the dragon’s head. It represents your future or destiny. We look towards this node when we need help determining what our next step should be. It represents what we must do, who we must become, what strengths we must have, or what skills we must obtain before we can progress in life.

This node, when compared to the south node, is one of optimism and positivity. It highlights the possibilities that lie before us and the opportunities that we can seize. It connects to the lessons you’ve learned, both in this life and past lives, and so it represents moving away from the known into the unknown. This can be a little scary but there’s no progress without sacrifice.

Apparently, most people will begin to tackle the challenges held by their north node when they reach their thirties. Some will choose to do so before then and others will hold this task off for as long as possible. The only advice I can offer is to face these challenges whenever you’re ready, but don’t put it off based on fear alone.

The south node, also known as the dragon’s tail, represents fears and insecurities that have traveled with you from previous lives. While the fears themselves are often hidden from us, the traits we’ve developed to tackle or handle them are usually more obvious. The simplest way to look at each node is as the past and the future, with the south node being the past. We can’t change it, but we stop it from repeating.

There’s a certain degree of comfort to be found in the south node. This comfort is a trap though and should be avoided at all costs. We often feel at home, maybe even at ease, when we return to behaviors found within the south node. However, failure to leave these traits in the past will hinder all progress in the future. We look to the south node in order to discover what challenges are likely ahead of us in the future, these are the same challenges that we can learn about from the north node.