The New Year Chart: Buckle Down! 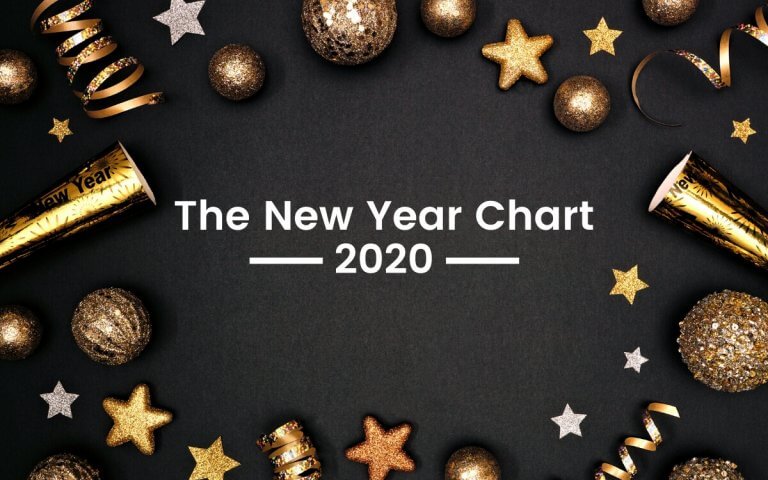 The New Year is upon us.  In astrology, there is a practice for casting a chart for an event known as mundane astrology.  This article will look at the chart cast for Greenwich Mean Time, which is the core time and location for all Western astrological castings.  Every chart that is an event elsewhere in the world (each person’s birth) is cast in a “time zone” related to Greenwich Mean Time.

Mundane astrology charts show us the meaning of the event and can be used as predictive tools for the year ahead.  This article will interpret the chart of the New Year and offer guidance for the year of 2020. 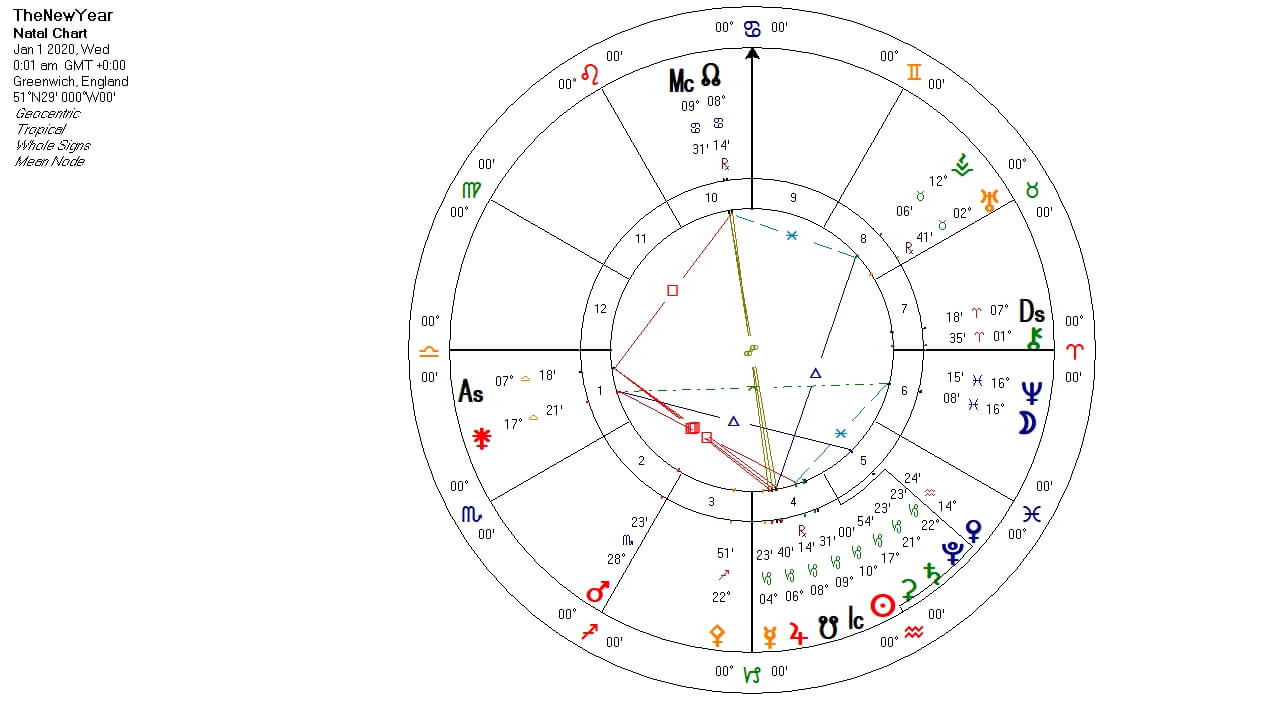 The New Year Chart will always be a Capricorn Sun Sign chart since January 1st is directly in the middle of the Capricorn phase of the Zodiac. Since the chart is cast for 12:01 am each year, the Ascendant will always be Libra and the Sun will reside in the 4th House, of family and our core identity.  Can everyone say, “New Year’s Resolutions”!?

This chart is a Capricorn “heavy” chart.  Seven points and the angle, Imum Coeli, are all in the 4th House and Capricorn at the first minute after the New Year begins.  The train begins with Mercury, followed by Jupiter, then the South Node, the IC, the Sun, Ceres, Saturn, and finally Pluto.  I chose the phrase “buckle down” because we are in the midst of significant change around institutions related to work, government, and medicine.

Additionally, Mars is in Scorpio in the 2nd House of Personal Resources and Finance.  Venus is in Aquarius in the 5th House of Creativity, and the Moon and Neptune are in Pisces in the 6th House of Day-to-Day Work and Health.  Uranus and Vesta are in Taurus in the 8th House of Shared Resources, and the North Node is in the 10th House of Career and Prosperity.

The keynote is, “the power of individuality manifests through organizational ability” and the symbol is, “a mountain climber plants a flag upon a rocky summit” (Astrology, Moore and Douglas, 153)

The keynote is, “needs of others call forth a sympathetic response” and the symbol is, “a sister of mercy tends hopeless cases in a hospital charity ward” (176).

The keynote is, “thoughts are expressed clearly and rationally” and the symbol is, “a librarian arranges books according to a master plan” (156).

The keynote is, “attachments are idealistic and impersonal” and the symbol is, “a group of young people admire a statue of Aphrodite in a museum” (168).

The keynote is, “hidden reserves of power explode into action” and the symbol is, “miners drilling deep into the bowels of the earth strike oil” (137).

The keynote is, “expansion is expedited in prudent, conscientious ways” and the symbol is, “the president of a large corporation negotiates a merger” (160).

The keynote is, “perfection is achieved through discipline and restraint” and the symbol is, “a gem cutter shapes a diamond” (161)

The keynote is, “healing requires personal responsibility to take action when your health is at risk” and the symbol is, “a woman with a broken leg makes her own splint”.

The keynote is, “revolution breaks old traditions to begin new ones” and the symbol is, “a family arrives at the restaurant in a driverless car”.

The keynote for Neptune in Pisces is, “the power of spirit moves through all individuals” and the symbol is, “a beggar and a wealthy person share food and philosophy on a park bench”.

The keynote is, “transformation takes place through discipline and persistence”, and the symbol is, “engineers and work crews build a railway tunnel through a mountain”.

The keynote, “commitments must be fair for both parties”, and the symbol is, “both people getting married happily say ‘I do’”.

The keynote is, “a good home is built on a solid foundation”, and the symbol is, “a farmer surveys a large crop and a healthy herd of cattle grazing in adjacent field”.

The keynote is, “nourishment comes from hard work well planned”, and the symbol is, “a wise investment matures over time creating savings for old age”.

The keynote is, “strategies need global reach and enthusiastic promotion” and the symbol is, “a marketing campaign goes viral giving producers and consumers what they want”.

The North Node in Cancer

The keynote is, “the lesson of becoming is found in compassion” and the symbol is, “soldiers drop their weapons and embrace one another on the battlefield”.

The South Node in Capricorn

The keynote is, “the lesson of release must let go ‘the end justifies the means’” and the symbol is, “a detainment center is bulldozed for farmland after all detainees are released”.

Interpreting the Year Ahead

On the whole, the changing landscape of Western societies suggests that our previous expectations around retirement, health care, and social safety nets will have eroded to the point where we can begin to see and feel a new normal for the millennial generation that will look nothing like the baby boomer generation that is beginning to “exit stage left”.

Pensions have been largely phased out of corporate retirement plans, replaced with individual retirement and 401K accounts, which make investors more vulnerable to market fluctuations than the stability once offered by pensions.  Studies are now emerging that, even with the most advanced medical knowledge, the current young generation is not likely to live as long as the generations in front of them.

Wealth inequality is accelerating, largely due to advances in robotics and artificial intelligence, which have been eroding wages for the middle class in subtle but persistent ways.  The middle class, as a concept and reality, is actually a tremendous source of stability.  Extreme wealth inequality, historically, has led to social unrest and upheaval that can destabilize society.

Thus, this chart shows 2020 to be a potential tipping point that could lead to massive social overhaul, which can be done by “coming together” or by some version of a civil war.  With Mars in Scorpio and the 2nd House, we will, across the world, feel real or imagined concerns about our survival.  Venus in Aquarius can offer us creative ways to join together or lead us further down the path of extreme tribalism.