This article will look at one of these dynamics happening between two points this month, Mercury in Scorpio trine Neptune in Pisces. Mercury will actually trine Neptune twice this month, once while the are both retrograde, and a second time after it goes direct again and Neptune stations.  This second article will address Mercury (in direct motion) trine Neptune (stationary).

When two points trine with one another, they support one another.  The point of communication will give support to and get support from the point of dreams, surrender, and spirituality.

The Trine, and Mercury and Neptune

This month, when the faster moving Mercury goes forward again and reaches 15 degrees 55 minutes (15d55m) of Scorpio, it will trine with Neptune at the same degree, but in Pisces, at 4:37 am EST on November 28th.  The impact of this relationship begins to be felt up to 3 degrees before and 3 degrees after the exact aspect and is known as the orb of influence.  When the faster moving body approaches, the aspect is said to be approaching and is building energy.  Once the exact aspect has passed, the aspect is said to be separating and is losing energy.  The duration of this particular aspect will run from November 24th to December 1st. 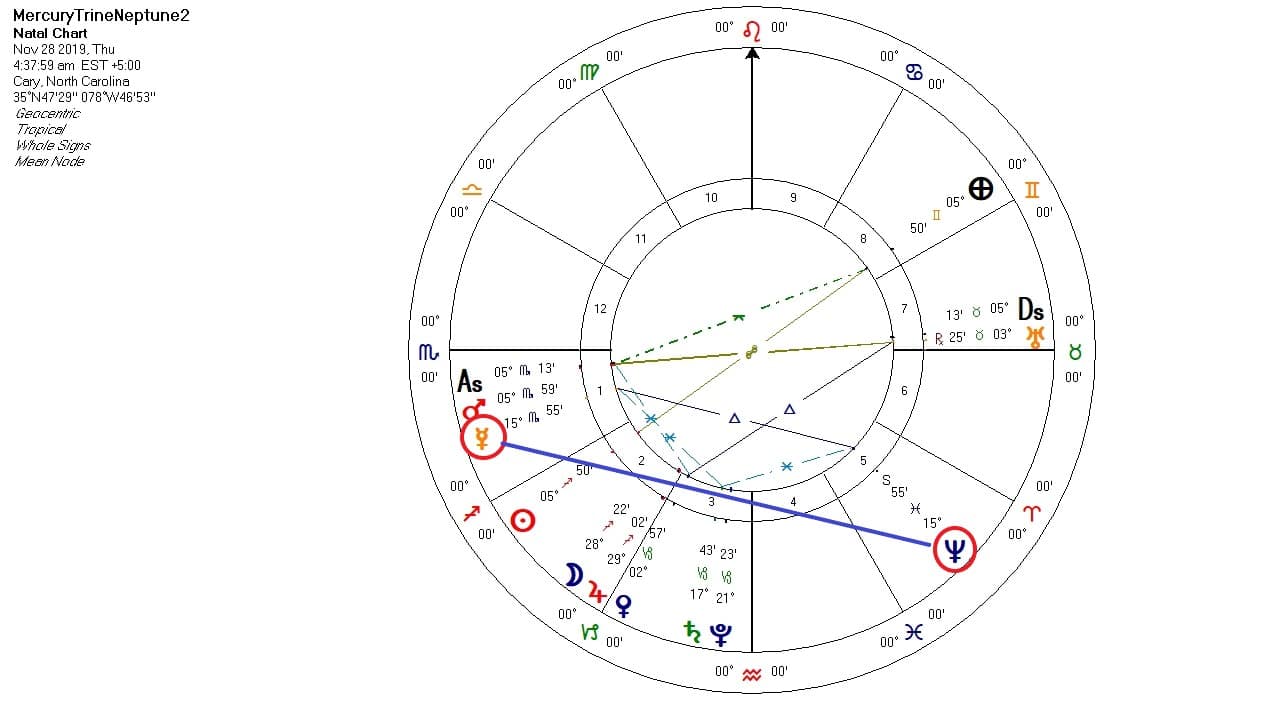 With Mercury moving through Scorpio at this time, there is a focus on communicating the truth, revealing secrets, creating secrets, and keeping secrets. Scorpio rules dark places and Mercury is like a navigation tool to be used while traveling through the dark and hidden realms.

With Mercury direct again, the energy is “forward-moving” rather than “inwardly seeking”, so now we need to project what we learned from November 9th to November 17th out into the world as a vision for what we want to achieve.  While the minutes of the degree changes slightly (from 58 when retrograde to 55 while direct), the degree did not, so the Sabian symbol stays the same.

The stationary effect occurs when a point is changing from direct to retrograde and back from retrograde to direct.  Stationary energy “straddles” the retrograde “world” and the direct “world” of the motion of the point.  Even within the span of the stationary period, motion is occurring, but it has slowed and continues to slow until the singular moment when the motion switches.

The Sabian Symbol for Neptune at the time of the trine is 16 Pisces, “the flow of inspiration”. Jones says, “this is a symbol of the spiritual power which the development of civilization has brought to a point of practical potentiality, and on which each person may draw in meeting any and all critical issues of everyday living”.

The trine aspect creates a powerful flow between two points. If a sextile aspect, also a flowing aspect, is a straw’s diameter, then a trine is the glass or cup diameter the straw would be sitting in to extract the liquid.  Mercury and Neptune in trine in water signs represent a powerful psychic/emotional event.  With both direct again, this event is going to start moving the internal work form the previous trine outward and into the world

The connection to spirit and dreams will be particularly intense during this second six-day stretch so you might find it very useful to have a journal near your bedside, especially if you decide to set an intention before you go to sleep.  You can ask to speak with or share a dream with someone that has passed on or even try to make a dream connection with someone in your life by asking them if they would like to try to use the energy to share a dream with you.

The speed and depth of entering a meditative state will be enhanced, as would past life regressions through hypnosis.  The boundary between spirit and reality will be open and intense.  It will also be a time when mind-altering drugs or substances can be particularly strong, so it would be wise, if use them, to do so properly and with support.

Imagine that you entered a fog during the first trine and realized moving around would be dangerous, so it was best to sit down and wait for the fog to lift.  This trine is the fog lifting.  Once it is complete you should be able to see where you need to go, which may not be where you thought you were going, or it may turn out to be exactly where you thought you were going.  Such is the nature of Neptune, revelations usually come after the work is done, not before or during.