Throughout each month transiting points create dynamic relationships with your natal chart points.  Often times two transiting points will relate to one another in a way that affects us all, depending on the points involved.  This article will look at one of these dynamics happening between two points this month, Mars in Libra squaring Pluto in Capricorn. When two points square “off” with one another, they seek challenge and compete with each other.  The point of aggression will challenge the point of death and rebirth.

The Square, and Mars and Pluto

This month, when the faster moving Mars reaches 20 degrees 54 minutes (20d54m) of Libra, it will square with Pluto at the same degree, but in Capricorn, at 5:20 am EST on November 5th.  The impact of this relationship begins to be felt up to 3 degrees before and 3 degrees after the exact aspect and is known as the orb of influence.  When the faster moving body approaches, the aspect is said to be approaching and is building energy.  Once the exact aspect has passed, the aspect is said to be separating and is losing energy.  The duration of this particular aspect will run from October 31st to November 9th. 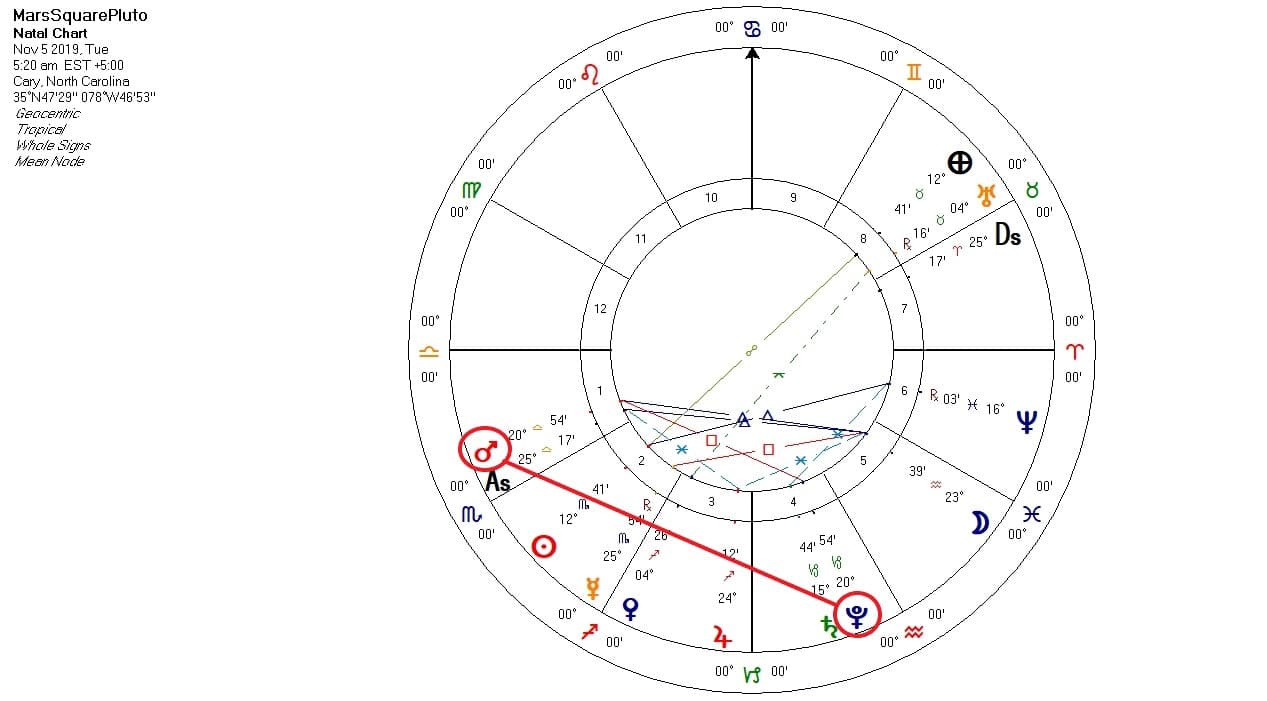 My Mars is in Taurus in my 7th House of Partnerships, so I prefer to assert myself through my actions (earth energy), and can be quite reserved with my aggressive emotions and rather slow to anger.  Mars happens to be in Detriment in Taurus, which is a relational sign and ruled by Venus, meaning he does not feel at all at home in this sign. He is like a warrior home from battle waiting for his next deployment.  The 7th House placement makes the situation even more challenging for Mars since the 7th House is also ruled by Venus.

With Mars moving through Libra at this time, there is a focus on “the sword of justice”; for a very detailed article about Mars in Libra, you can read the one I have written about Mars ingress into Libra, which happened last month on October 4th.  Suffice to say that this placement is challenging for the same reasons as Mars in Taurus; Venus rules Libra, so Mars is muted or restricted in this sign.

The Sabian Symbol is 21 Libra, “a crow upon a beach”.  From the book, The Sabian Symbols, author Marc Edmund Jones says, “this is a symbol of a complete lack of social sensitiveness.  There are here the raw elements of experience, primarily the side of a basic self-awareness and with man exhibiting the unconditioned friendliness through which he brings new facets of himself to a point of immediate expression”.

He assigns the keyword as EXHILARATION. Further, he says, “when positive, the degree is naïve assurance and a basic delight in every possible aspect of human relationships, and when negative, a look to others for fulfillment without any willingness to give at all of self” (171).

Pluto represents death/rebirth, transformation, elimination, and upheaval.  Pluto rules changes brought about through intense experiences, power dynamics, and sexuality in the sign of Scorpio and the 8th House of Shared Resources and Intimacy.  It is a water point that is the outer boundary of the main astronomical bodies of our solar system.  Because it takes so long to travel around the Sun (17 to 31 years), it is a generational point.

My Pluto is in Virgo in my 11th House of Community, nearly conjunct Uranus.  Pluto works well in earth signs as a practical agent of change; the Virgo Pluto generation was the 60’s generation, bringing practical changes to everyday life in society.  As a result, I am part of a group concerned with health and fitness (Virgo), science applications (especially in medicine and emerging conveniences in daily life, also Virgo influence).

With Pluto moving through Capricorn at this time, the entire planet is going to have to “face upheaval” in the largest of societal structures – business, government, education, and health care.  Capricorn and Pluto mean large scale change to the “business” of civilization.  Whatever is corrupt or unsound in our societal structures will face earthquake level impacts; what is well-built will remain and what is weak will be destroyed.  This Plutonic work in Capricorn started in 2008 and will not end until 2024.

The Sabian Symbol for Pluto at the time of the Square is 21 Capricorn, “a relay race”. Jones says, “this is a symbol of an inevitable culmination for group opportunity, and of a continual enhancement of the individual’s skills and talents through his thoroughgoing co-operation with others in some vital phase of experience”.

The keyword is FITNESS.  Further, he says, “When positive, the degree is exceptional skill in bringing the elements of any given situation to a functional wholeness, and when negative, complete inadequacy of self-resource” (261).

The square aspect seeks to challenge energies to force growth; points “encounter each other” from disparate elements, in this case, air and earth.  During the period of this square, the point involving aggression and the point involving upheaval will “have at it”! This square can get rather testy since one point wants to do what it wants, and the other point wants to eliminate or destroy anything that is not strong enough to survive.

The very challenging nature of this aspect, with these points, will come from the fact that Mars will be operating with righteous (Libra) anger (Mars).  Pluto will want to use power to make changes to anything that is performing poorly or inconsistently.  Survival of the fittest is a very useful phrase to describe the competitive environment that will make these two points intensify everyone’s behavior.

Growth will not be achieved through cooperation; someone will win, and someone will lose.  The major question will be answered through a test of the strength of the institutions to prevent, withstand, or even put down challenges that could really disrupt or destroy the fabric of stability. The righteous anger of Mars in Libra can be particularly threatening and aggressive if it senses weakness in the Capricorn structures that are going through large scale change while Pluto is moving through the sign.