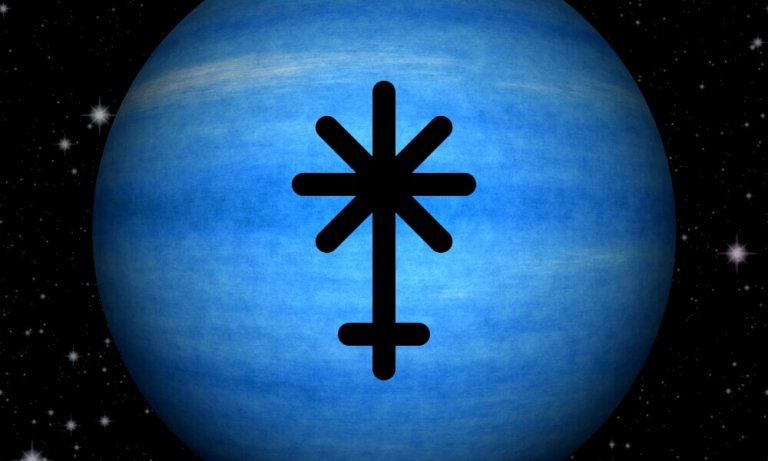 Throughout each month transiting points create dynamic relationships with your natal chart points.  Often times two transiting points will relate to one another in a way that affects us all, depending on the points involved.  This article will look at one of these dynamics happening between two points this month, Juno in Virgo opposing Neptune in Pisces. When two points oppose one another, they seek balance.  The point of duty and commitment will seek balance with the point of surrender and faith.

The Opposition, and Juno and Neptune

This month, when the faster moving Juno reaches 16 degrees 44 minutes (16d44m) of Virgo, it will oppose Neptune at the same degree, but in Pisces, at 7:35 am EST on October 1st.  The impact of this relationship begins to be felt up to 3 degrees before and 3 degrees after the exact aspect and is known as the orb of influence.  When the faster moving body approaches, the aspect is said to be approaching and is building energy.  Once the exact aspect has passed, the aspect is said to be separating and is losing energy.  The duration of this particular aspect will run from September 24th to October 8th. 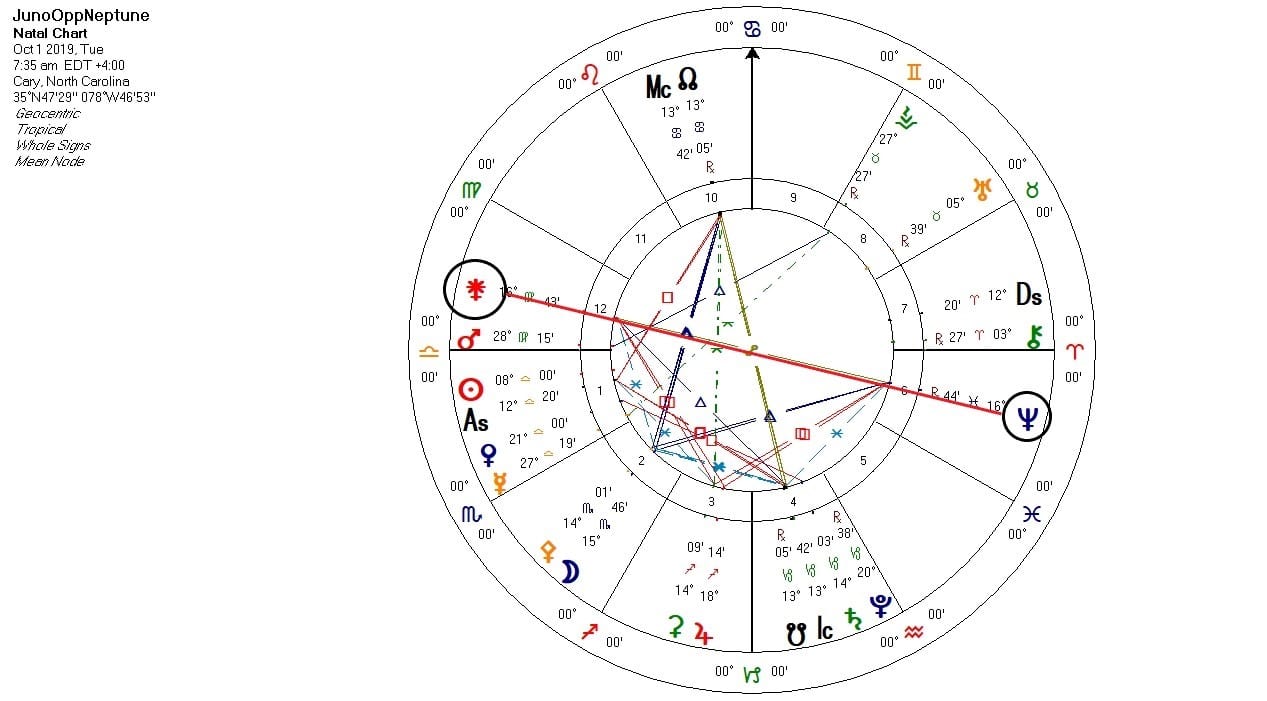 Juno, the Queen of Heaven, represents the duty of parenting and the commitment of marriage.  As a goddess, Juno ruled childbirth and marriage, and the status one must or should achieve to do both successfully.  Still considered a new point in astrology, even though Demetra George wrote extensively about this asteroid in her book Asteroid Goddesses, published in 1986 (reissued in 2003), Juno has not been assigned rulership of a sign or house.

In my own professional work, I am comfortable assigning her co-rulership with her heavenly husband, Jupiter, in the 9th House and the sign of Sagittarius.  She essentially rules the beliefs regarding the role of the matriarch in society. In your astrology chart, she represents energy devoted to doing what is necessary.

My Juno is in Scorpio in my 1st House of Identity, so I learn quite a lot about myself through my committed relationships.  Scorpio is an intense placement for this point since the sign and point both focus on issues related to power, who has it and who does not, how to use it and how to resist it.  Juno is also retrograde, which gives my chart identity a “quiet fortitude” when it comes to my commitments and relationships.

With Juno moving through Virgo at this time, there is a focus on the practical issues of our committed relationships.  How are our committed relationships working and where are the critical issues or problems that need to be addressed?  The “devil” is certainly in the details during transiting Juno through a sign, which lasts roughly 3 months at a time.

The Sabian Symbol is 17 Virgo, “a volcano in eruption”.  From the book, The Sabian Symbols, author Marc Edmund Jones says, “this is a symbol of that constant expansion of self and nature which constitutes reality in its most fundamental terms, emphasized here on the side of physical force and the blind urge of life to continue to be”. He assigns the keyword is EXPLOSION. Further, he says, “when positive, the degree is a creative passion as a rejection of superficiality and genuine ordering of self, and when negative, petulance, and tantrums” (316).

My Neptune is in Scorpio in my 1st House of Identity, merged with my Ascendant (how people “see” me), so I am viewed as a spiritual or mystical individual.  This identification is not easy to see in myself unless it is reflected back to me by those around me, which it has been.  I currently make my living as a spiritual adviser; it is my profession and my identity.

The Sabian Symbol for Neptune at the time of the opposition is 17 Pisces, “an Easter promenade”. Jones says, “this is a symbol of that constant expansion of self and experience which characterizes reality on its conscious levels, emphasized here on the side of humanity’s utter individualistic self-expression”. The keyword is CELEBRATION.  Further, he says, “When positive, the degree is a tireless self-refinement in an effective inspiration of others, and when negative, a craving for attention” (317).

The opposition aspect seeks to balance energies that are in opposite signs; the points and signs involved need to harmonize to get the full value of the aspect.  During the period of this opposition, the point involving duty and commitment and the point involving surrender and faith must find a balance, creating collaborative energy between Virgo service through control and Pisces service through surrender.  This opposition will “favor” Neptune because it is in the sign of its rulership.

The very problematic nature of this aspect, with these points, will come from the fact that Juno wants to “keep everything together” even if appearances hide something that is failing, already failed, or needs to fail.  The best use of the Juno energy would be to apply the attention to detail to help facilitate what needs to dissolve.  Kind of like, “well, if you feel you need to move out, let me help you pack properly, and “let’s figure out the fairway to divide up any shared assets.”

The balance is achieved by accepting and seeing Neptune’s message of surrender with regard to certain relationships while using Juno’s sense of duty to see the release process through in an orderly and well-managed way.  While it does not necessarily mean the ending of a relationship, though that is a viable outcome, it does mean “accepting” some important shift that is meant to “wash away” and cleanse (the water of Neptune and Pisces) the details (Virgo) of a relationship (Juno) that are no longer healthy or practical (Virgo).

The Bear Totem in the Native American Zodiac

10 Reasons Why it is Hard to Love a Libra