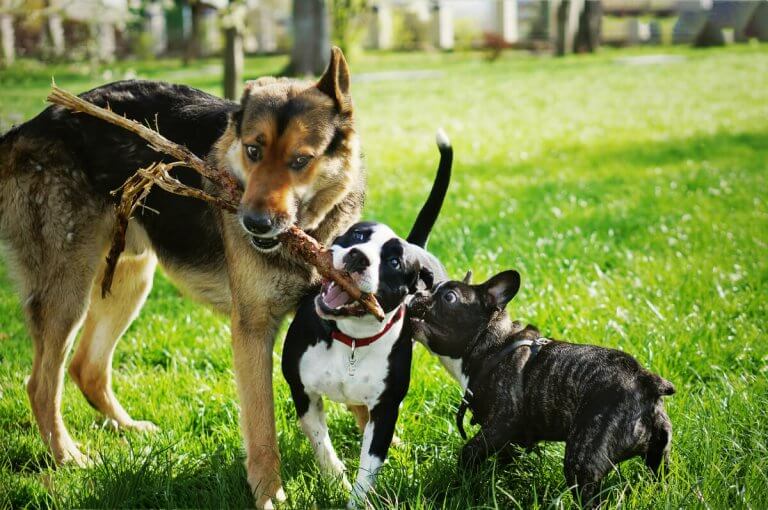 There are plenty of dog breeds out there that have personalities that match the characteristics of each tarot card due to the strong archetypical type. And due to the fact that it is not always easy to remember the meaning behind some of the cards, if there is an easy association to them such as dog breeds – it makes it a lot easier to remember.

And for dog lovers that want to learn the tarot, this tactic will help them master it quite fast. Let’s now take a look at how each card in the Major Arcana is associated with dog breeds.

The Fool – The Jack Russel Terrier

The Fool is ready to go exploring as the characteristic is someone ready to delve into something with no experience – and is on the go. The Jack Russel terrier is exactly this type. They are active, carefree and are ready to go where the excitement is.

The Magician is hard-working, creative, inventive, and has plenty of talents. The Golden Retriever has the same qualities as they are quite skillful and great problem-solvers. This is why this is a common breed chosen to be trained as therapy dogs. They are able to master the demands of the type of work and are excellent problem-solvers and quick thinkers.

The High Priestess – The Poodle

The High Priestess is known for its mysterious character and brings out the message to tap into one’s intuition. The High Priestess can shape into different forms, the same way a poodle can as they can be styled in different ways. Additionally, the poodle has been known to have some abilities that are quite magical.

The Empress – Any Type of Sheepdog

The Emperor – The Mastiff

The Emperor is the one that is in charge and demands order in a fatherly way. He is the leader, and so is the Mastiff dog. They are highly assertive, protective, and are very confident dogs. They are also the ones to let others know who is boss. They certainly are!

The Hierophant follows the rules and relies on the knowledge that is gained from the community. They are not the types to assert themselves or to lead. They are complete followers just like Saint Bernard. The Saint Bernard breeds are guard and rescue dogs, and they are highly obedient to their owners. They are really good boys and girls.

The Lovers is the card that represents making important choices especially when it comes to relationships. And it is the card that represents falling in love before making the choice to be with them. The Afghan hound is a playful dog that is also astute, and they really know how to make someone fall in love with them. They are known to bond with people quite well, but they also choose those who they are the most connected to as well.

The Chariot brings out the message to keep going no matter how badly you want to give up. The Alaskan Malamute is the breed that will just keep doing that. They will keep moving on no matter how tired they are, and they are quite courageous. This is why this breed is best associated with this card.

Strength is what is represented by this card – inner strength for anything that is being faced. It brings out the message that anyone is strong enough to get through difficult times. This card is best associated with the Rhodesian Ridgeback because they are known to be excellent hunters and are great guard dogs. They will sacrifice their lives for their master as well if they must.

The Hermit – The Irish Wolfhound

The Hermit is the card that brings out the message to be introspective, reflective, and to sit back, observe, and to analyze. The Irish Wolfhound will do just that. They are quite gentle and appear to be old souls. They have a spiritual nature to them, and they are highly sensitive. They know how to touch your soul through their eyes.

The Wheel of Fortune – The Greyhound

The Wheel of Fortune tarot card indicates that a turn of events is about to happen and to go with the changes. The most fitting dog breed for this card is the Greyhound. This is a versatile, healthy, and friendly breed that is extremely trainable. They are known as race dogs, but they can also be excellent family companions.

Justice is all about cause and effect, and it is the card that represents the law. And the best fitting breed for this card is the German Shepard. They have many great traits. They make excellent police dogs and are great when for any type of community service. They can make great pets and therapy dogs as well. These dogs are an important asset for keeping society balanced.

The Hanged Man is about making sacrifices in order to move forward with something. And the Peruvian Inca Orchid is a rare dog breed that represents this because this breed does not have fur. They may not have fur, but they have incredible sight and intuition. Families that adopt this rare breed will sacrifice the fur but instead, they will have a dog that has something that most don’t – which is incredible eyesight.

The Death card is quite misunderstood and the same goes for Pit Bulls. The Death card represents transformation and Pit Bulls are great dogs that if given a chance can change many lives for the better. They can make excellent house pets and therapy dogs and are quite protective.

Temperance is all about balance and moderation, which requires patience. The Doberman is the best dog breed that is associated with this card. They are loyal, smart, and very strong. They also require balance as they need exercise and attention. If they are lacking either, they will act up and make it known that they are missing what they require.

The Devil is about having attachments that are not healthy, and the fitting dog breed for this card is the Bandog. This breed is a mix of different Mastiffs and Pit bulls. They have a very strong prey instinct and will make their owners known that they are the ones in charge. They are the ultimate Alpha dog, and an owner must have a strong and bold personality to have this dog as a pet.

The Tower is the card that represents upheavals and unexpected destruction. The Czechoslovakian Wolfdog is the fitting breed for this card. This breed is a mix of a German Shepard and a wolf, and this can cause this breed to have an unpredictable temperament. They may be sweet one moment and welcoming belly rubs. But the next moment they may snap. You would not have seen that coming.

The Star – The Miniature Schnauzer

The Star is the card that is about having hope and faith and represents the silver lining. The Miniature Schnauzer is the breed that is happy-go-lucky, and even though they have an instinct to hunt for rats, they are on their owner’s side and will cheer them up no matter what. They are an active dog and will get the owner that is sad to get active with them.

The Moon is about keeping something hidden and also you getting yourself in touch with your psychic self. This Moon is associated with Pisces and this card also represents anything that the astrological 12th house does. The fitting dog breed for this card is the Louisiana Catahoula Leopard Dog. They are known to swim and have strong psychic energies. They are not overly friendly and will immediately sniff you out if they don’t like you. They don’t like to be seen and hide. They are loyal to their families though.

The Sun is the happy card and is the most positive card in the Major Arcana. The fitting dog breed is the Bichon Frise. These dogs are sunny, affectionate, and are excellent with children, and are the ultimate lap dogs. They are also so incredibly cute.

Judgment is the tarot card that represents you reaching a high level of consciousness through growth. And this dog breed, the Karakachan is also known as the Bulgarian Shepard is the ultimate protector as they do not fear bears and wolves. They have been known to protect herds from wild animals. This is the card that gives others hope and not to be afraid of something that could bring them down. This type of dog is fitting for this card because this is the breed that reassures their owners and the animals in the herd that they have their backs.

The World is the card that is indicative that achievement has happened and as a result, moving onto the next cycle is what will follow. The reason that the Border Collie is fitting for this card is due to the fact that this is the most trainable and intelligent breed around and they work very hard. Saturn is the planet that is associated with this card, and Saturn represents hard work, and this is the trait of this dog breed. This breed wants to achieve great things and knows that it can be done with hard work.

If you are a dog owner and you have a breed that was not mentioned, what tarot card would you say is associated with the dog and why?

7 Ways of Cleaning Your Aura

Why You Should Get a Tarot Reading from a Professional