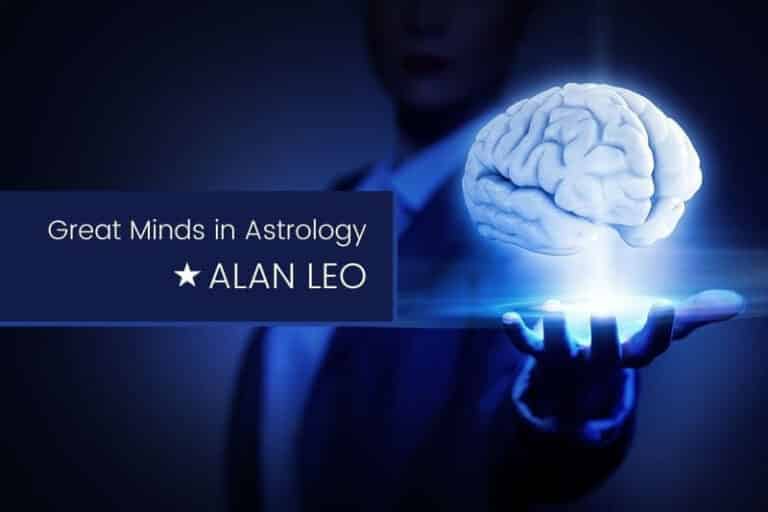 This article will distill a thinker’s essential and many contributions and provide a book list of their key works. As with any thinkers who write extensively, some books stand out more than others, and these will be identified. Some works have practical application and others are theoretical, depending on whether or not you wish to practice astrology or just study it.

This article will talk about Alan Leo.

Alan Leo was born William Frederick Allan in Westminster, England. He is often known as the “father of modern astrology”. Through his efforts, astrology re-emerged from its fall into disuse after the 17th century during the rise of rationalism. Riding the wave of new psychology (Freud and Jung were his contemporaries), Leo infused his books with a psychological approach that caught the attention of the late 19th and early 20th-century literate public.

Alan Leo was a prolific writer who published his first book – Modern Astrology – in 1898. He followed that book with:

His many books are must-haves for any astrology library if you want to have key books from the history of astrology. Unfortunately, Leo’s work is very much trapped in his era, which was not particularly egalitarian or diverse. While he did introduce the emerging concepts of “free will”, there was much that was still deterministic in the interpretations. His work is clearly a bridge between the classical views and modern ones, but it would be considered a one-lane, highly suspect bridge if you were to use it as your sole method for crossing into the study of astrology today.

Still, there are many golden nuggets to find if you are willing to sift through the grit and sand of the turn of the 20th century.

His works have been reprinted and can be purchased on Amazon as “new” books. Various older editions can be found through resellers on Amazon, through online used bookstores, and eBay.

Esoteric Astrology was most recently republished in 1978 and can be purchased on Amazon:

From the back cover:

For the first time in the history of astrology, an entirely new method of reading horoscopes is given. The individual and personal stars of all individuals are explained by a series of star maps, showing how the age of the soul may be astrologically discovered. Complete instructions are provided for creating a star map from a horoscope.

Astrology for All was most recently republished in 2006 and can be purchased on Amazon.

From the back cover:

He is considered the father of modern astrology: Alan Leo opened up the secrets of divination by the stars to the general public in the early 20th century with a popular line of astrology manuals that set off a craze for horoscopes that continues to this day.

Here, in this replica of the 1910 fourth edition of his essential primer, Leo teaches us …

ALSO, FROM COSIMO: Leo’s The Key to Your Own Nativity, Symbolism, and Astrology: An Introduction to Esoteric Astrology, Horary Astrology, and Mars: The War Lord.

British astrologer WILLIAM FREDERICK ALLAN (1860-1917), aka Alan Leo, published Astrologer’s Magazine as well as a line of astrological materials; he founded the Astrological Lodge of the Theosophical Society in 1915.

How to Judge a Nativity

How to Judge a Nativity was most recently republished in 2010 and can be purchased on Amazon.

From the Amazon description:

This scarce antiquarian book is a facsimile reprint of the original. Due to its age, it may contain imperfections such as marks, notations, marginalia, and flawed pages. Because we believe this work is culturally important, we have made it available as part of our commitment for protecting, preserving, and promoting the world’s literature in affordable, high quality, modern editions that are true to the original work.

There is no attempt to pass this off as anything more than a historical text. Still, there are some jewels hidden within.

The Progressed Horoscope was most recently republished in 2018 and can be purchased on Amazon.

From the Amazon description:

This work has been selected by scholars as being culturally important and is part of the knowledge base of civilization as we know it.

This work is in the public domain in the United States of America, and possibly other nations. Within the United States, you may freely copy and distribute this work, as no entity (individual or corporate) has a copyright on the body of the work.

Scholars believe, and we concur, that this work is important enough to be preserved, reproduced, and made generally available to the public. To ensure a quality reading experience, this work has been proofread and republished using a format that seamlessly blends the original graphical elements with text in an easy-to-read typeface.

We appreciate your support of the preservation process and thank you for being an important part of keeping this knowledge alive and relevant.

This text is certainly worth owning because it is a bedrock of current astrological practice, and valuable to know.

His remaining texts are reprinted as part of a historical preservation campaign and can all be purchased on Amazon.

The latest version was republished in 2010 and can be purchased on Amazon.

The Key to Your Own Nativity

The latest version was republished in 2010 and can be purchased on Amazon.

Casting the Horoscope is another republished 2010 reprint, which can be purchased on Amazon.

The Symbolism of Astrology

This text was reprinted by the same publisher that republished Astrology for All, which includes this write-up on the back cover:

Here, in this 1915 guide to the red planet, Leo explains the power of Mars over the zodiac-and over the human spirit-from its sway over the conscience to its command of the passions. How does Mars stimulate greed, stir the martial senses, and inspire rage? Leo explains the strange rule of the planet of war over us all.

It can be purchased from Amazon.

These books are especially important to the history of astrology as the link between the classical period up to the 17th century, then there is mostly a void from 1800 to 1900, until Alan Leo. His work between 1898 and 1917 kickstarted an astrology revival that has created an interest in astrology that is stronger than ever today!