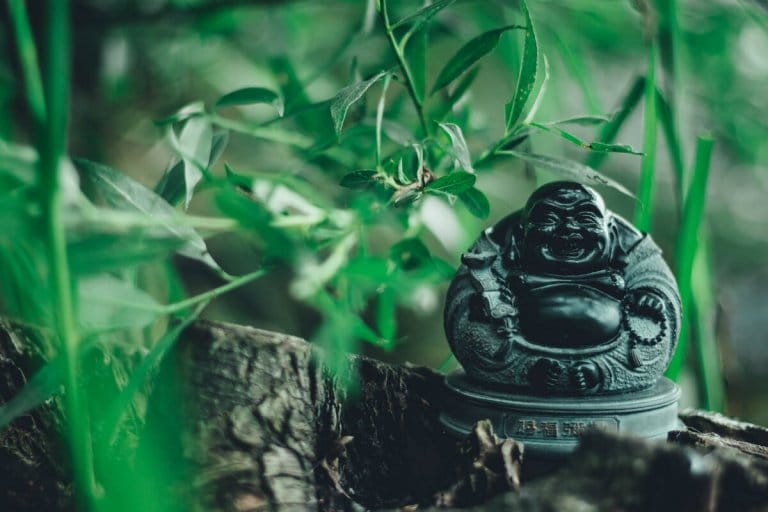 The Historical Significance of the Laughing Buddha

In Feng Shui folklore, the Laughing Buddha symbol is thought to be based on a real-life Zen monk of Mahayana Buddhism. He was known as Budai and he died at the end of the tenth century. He was an eccentric fellow, not at all like the stereotypical serious and quiet Zen monk. Budai would vagabond around, always with a contagious light-hearted spirit. He dressed in a simple frock and carried a simple cloth bag to stow his few worldly possessions. Children loved him and followed him everywhere he went. He is also said to have brought out the child-like jovial spirit in adults too. This is why the Laughing Buddha is often depicted with children and a small bag. The name “Budai” literally means “cloth sack.” Some Feng Shui Laughing Buddha statues also depict him with a “Wu Lou,” a type of Chinese gourd, which Budai may have used to carry coins and is today a Feng Shui symbol for good health.

Budai is described several places in “The Jingde Record of the Transmission of the Lamp,” a multi-volume series of biographies of important Zen Buddhist figures. This historical text was written during the Song dynasty, in the early eleventh century, not long after Budai is thought to have died. He was a legend when he was alive but became an even more famous legendary figure after his death as people missed the positive joy and hope he spread to everyone who encountered him. While he was never formally elevated to sainthood, he is considered one of the uncommitted saints of the Zen Pantheon. While not part of the Chan line, it is believed he was given this unofficial elevated status to bring more common people into Zen Buddhism. It evidently worked because Budai was cherished by many and there’s no doubt this is partly why the Laughing Budha is such a popular Feng Shui symbol even today.

Where To Place Your Feng Shui Laughing Buddha

One way to ensure you continually receive the auspicious energy from your Laughing Budha is to rub his belly daily. Budai was famous for rubbing his big belly and legend has it that he allowed children and others to rub his belly too. In this way, his goodwill “rubbed off” on others, pun intended! After a bad day, you can come home, rub your Laughing Buddha, and allow yourself to have a good deep belly laugh to rejuvenate your positive spirit and quite literally laugh your troubles away. Laughter is the best medicine as they say, and good luck tends to find those with a positive attitude! This is why some people who believe in the Law of Attraction also have a Laughing Buddha in their home or business.

Like other Feng Shui cure statues, the Laughing Buddha comes in all sizes from keychain-sized to bigger than life-size! Some successful businesspeople even keep a small Laughing Budha on their desk and rub his belly before important meetings when luck can bring great fortune. However, it will be difficult to give your Laughing Buddha’s belly a good rub if he’s too small so some Feng Shui experts recommend the placement of a larger Laughing Buddha in your home, even if you have a smaller version elsewhere.

Even for those who don’t practice Feng Shui, most people will smile when they see a Laughing Buddha, as you may be able to observe when you go “people watching” at your favorite Chinese restaurant. There’s just something quite contagious about a jolly man with a big belly laughing and having fun. Does this remind you of any other jolly beloved figure (with a belly full of jelly)? Display your Feng Shui laughing Buddha and spread the joy and good fortune! When you spread positive energy into the universe, it has a way of multiplying and finding its way back to you!