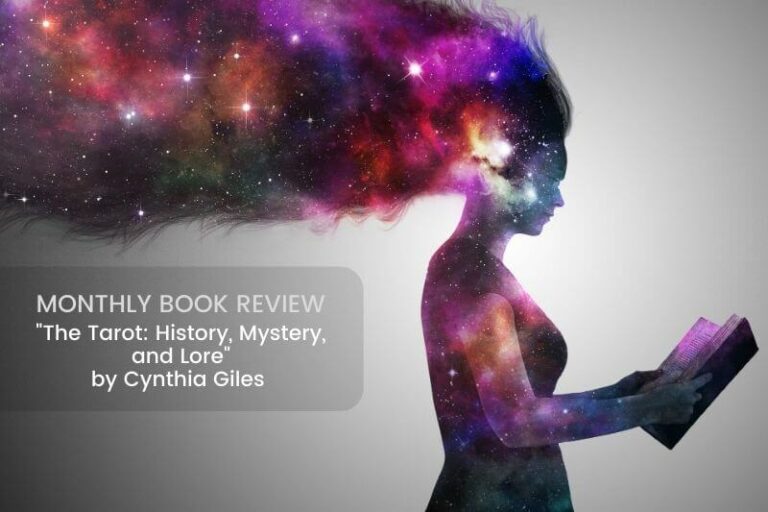 The number of books on Tarot versus the number of books on Astrology is like the difference between silver and gold prices. Gold is currently selling at sixty-six times the value of silver. In truth, the gap is much wider when comparing books. While the production of decks has exploded since the 1980s, books about Tarot remain few and far between, which, paradoxically, makes it easier to find the best examples and write about them. This article will review a must-have book for any serious student of Tarot or practicing professional.

Cynthia Giles has a PhD in the humanities, specializing in Jungian studies. Her interest in the tarot spans fifteen years of reading, teaching, and scholarship. Currently, she lives in Cedar Hill, Texas, where she continues research and writing on archetypical structures. (book back cover, 1992). For more up-to-date information about her, you can visit her website.

Her original version of the book was published in 1992 and it was revised and reissued in 1996.

In her introduction, she states, “Tarot. The ‘great philosophical machine.’ The ‘key to the secrets of the ages.’ The ‘infallible instrument which foretells the future.’ Is it any of these? Is it all of them? What is the Tarot, anyway?” (ix)

The book is 239 pages long including: Acknowledgements, An Introduction to the Tarot, Three Parts – History, Mystery, and Lore, and an Index. It is an excellent, but very readable scholarly work.

There are nine chapters in parts 1 and 2:

In part 3 there are four sections:

Further into the introduction, she writes:

To understand its nature, one must begin where the Tarot begins – in the realm of the imagination. Imagination is the faculty that allows us to experience the immaterial. Ordinary perception operates through the senses, and so is confined entirely to experience of the material world, but imagination is not bound by the rules of space and time which govern materiality. Through the mode of imagination, it is possible to travel instantaneously into the past or future, to other lands, beyond the earth, and even to realms that don’t exist in the material dimension. Imaginatively, people encounter things they’ve never seen – flying dinosaurs, the dark side of the moon – and things that never can be seen – the color of feelings, for example, or a landscape of pure crystalline forms. (ix)

Giles begins her Prologue with an exploration of the etymology of the word, Tarot. She states, “The only thing we can say for certain about the word ‘Tarot’ is where it last stopped before arriving in the English language. ‘Tarot’ is the French term for a deck of seventy-eight cards which are employed both in games (though rarely today) and in divination.” (3)

She provides a Tarot Timeline on page 6, which begins in 1440 with the Visconti Trumps.

After a detailed and scholarly look at the Historical Tarot, she begins her look at the Esoteric Tarot in chapter 2 of part 1. She posits that the use of the Tarot as “an esoteric and divinatory instrument, so familiar to us now” began around 1775 when Antoine Court de Gebelin first encountered one of the trump cards and wrote,

I glanced at it and as soon as I did, I recognized the allegory … Each person showed me another card, and in a quarter of an hour the deck had been gone through, explained, and proclaimed Egyptian. And since this was not a figment of our imagination, but rather the result of selected and sensible knowledge of this game in connection with everything that was known about Egyptian ideas, we promised to make it known to the public one day …

Giles adds on page 25, “Court de Gebelin’s intuitive grasp of the Tarot images was, in fact, exactly correct – even though he was almost certainly wrong about its Egyptian origins.” The cards did capture archetypes, using images of Renaissance life to make the connection with the trumps. As she pushes further into her research, she shows the connection of the Tarot with the Kabbalistic Tree of Life.

The ten Sephirah form 22 paths, which correlate to the 22 Major Arcana Cards. The first path from Kether (the Supreme Crown) to Hokmah (Wisdom) is the Fool. Kether to Binah (Understanding) is the Magician. She provides the complete table of associations on page 31.

The further you go into the book, the more Giles opens up to the practice of using Tarot. The second part dealing with “Mystery” has more to do with initiation and the “mystery of life and the divine” than “solving a mystery”. This section also moves through historical periods but focused on the 19th and 20th centuries and the study of psychology.

Once you reach chapter 7, Tarot as a Way of Knowing, you have been thoroughly inundated with a historical and academic scholarship. Even the first part of this section continues to go over the less stellar applications of card reading, namely as a charlatan’s tool. But on page 131, she finally points out, “the next level of theorizing about Tarot divination is psychological. Here we can begin with the idea that the archetypical power of the Tarot images, together with the whole ambiance of the reading process, lowers the wall that ordinarily blocks the querent’s access to unconscious knowledge.”

From there on, the remainder of the book becomes a truly useful tool for learning and using Tarot cards.

I do recommend this book. As a professional reader since 1992, this book helped me make a huge leap forward in my practice when I bought my copy in 1993. If you want to take a deep dive into your own cards or consider reading for others, then this is a must-have book in your tarot library.

Why Does Each of the Signs Love Astrology?