Connecting with the God Hades 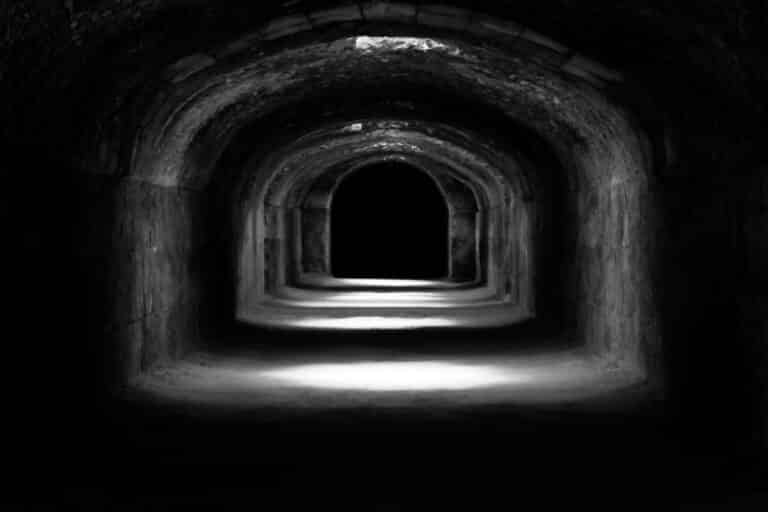 Throughout history, in modern times, and across cultures, gods and goddesses have played key roles in people’s beliefs. They have been and are invoked in prayer and meditation to help a person or society receive wisdom and provide grace in the area overseen by the deity.

This article, and the ones that follow, will look at various deities, their roles, and how to invoke them as guides and benefactors. The deity for this article is Hades, the Greek god who rules the Underworld.

Hades is one of three brothers central to Greek spirituality, the other two are Zeus and Poseidon. At the dawn of the gods, the brothers gathered to determine who would rule the realms: the sky, the sea, and the underworld.

Zeus won command of the sky, Poseidon controlled the sea, and Hades ended up with the underworld. In some of the stories, Zeus cheated in order to get rulership of the sky and force Hades to become the Lord of the Dead.

The afterlife is portrayed rather differently in Greek spirituality, and Hades has a largely administrative role, seeing to the judgment of souls as they pass from life into the afterlife. The worthiest souls get to go to the Elysian Fields, while the remainder ends up in Tartarus or the river Styx, for lost souls.

His most famous cruel act was the abduction of Persephone, at the behest of Zeus. He did find a way to keep her in his realm and she eventually became the Queen of the Underworld.

His Guard Dog and Ferryman

Nearly as famous as Hades is the three-headed dog, Cerberus, which guards the entrance to the realm of the dead.

He takes souls across the river Styx and into Tartarus to be judged by Hades and Persephone. One must have a gold coin to pay for passage.

Here is his card in the oracle deck, Gods and Titans, by Stacey DeMarco: 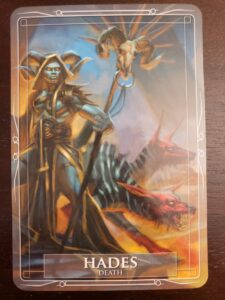 Everything has a life span: in particular – ideas, beliefs, and fears that have passed their expiration date. Sometimes in order for growth to occur, death must occur too. Prepare to let go of ideas, aspects of your personality, or even a specific phase of a relationship, to make way for new ones.

Connecting with the God Hades

You would choose to invoke Hades when you need help dealing with an ending, including death. Hades can help you manage your emotions through the worst of a transition, helping you process a loss in a way that does not break you or leave you overwhelmed.

He can help you with perspective and remind you that death is a constant in this existence and we ignore or suppress our knowledge of it at our own peril, especially when something dies suddenly, be it a job, friendship, or a loved one.

Hades is also a god to invoke when you need to make a dispassionate, but important decision. If you need to see clearly what needs to be judged, and how, then Hades is the god who can see into the soul of others and know their truth, reminding some of the main Scorpio zodiac sign traits.

If you want clarity about a difficult decision or someone in your life, Hades can prove a helpful spiritual guide.

All deities are available to us. Some may prove to be spiritual council members for us, while others serve as temporary guides or best fulfill a specific request.

You can ask Hades’ guidance for a specific request, such as, “My grandmother has passed; how do I best honor her memory?” Or, “My company went bankrupt and I lost my job; please help me put aside my grief so I can look for a new job.”

If you decide to ask for a specific request and he is not a member of your council, then be sure to make a proper sacrifice or payment ahead of or during your request. You may honor him by eating a pomegranate and putting the seeds out for the birds of the underworld, the raven or the crow, which are indigenous to most regions of the world.

You can ask him to be a temporary guide through a drawn-out dying period, like separation and divorce, or more literally, the transition of someone you care about who is at the end of life or facing a terminal illness.

The greater the request, the greater the honor, so you might want to purchase a miniature pomegranate tree to care for through the process. Or, you might visit a cemetery and place flowers on graves that do not have them.

If you recognize that Hades is a member of your council, he should be acknowledged as the head of your council. He will not have a secondary role, even if he shares some of his power with his wife, Persephone, who should also be on your council.

If he is the leader of your council, then you have chosen to be like Hades in your life. This means you may choose professions or roles that put you in the path of death and the people who are dealing with death, says a funeral home director or grief counselor.