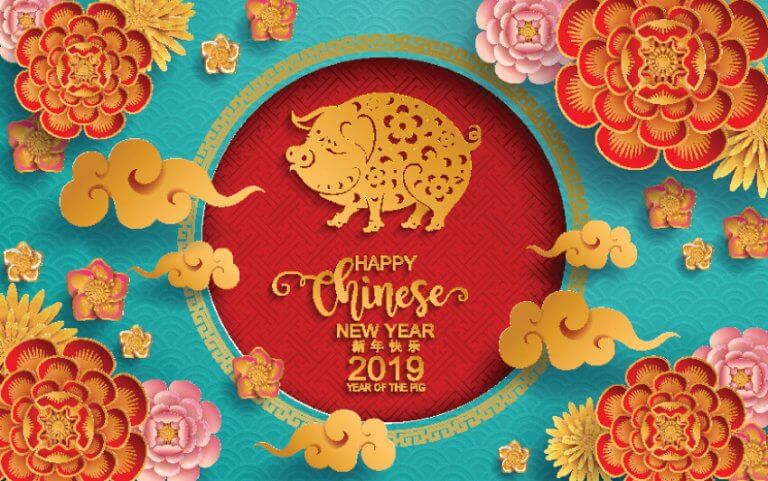 The Chinese New Year 2019 is all but here. And for that, you might need to prepare yourself too. It might be the case that you do not have much of an interest in other cultures like the Chinese, but let us reassure you, there is so much you will get to learn, especially about the 2019 year of the pig. Each Chinese year is denoted by an animal, which then goes on to decide how the entire year will go, depending on the moods and traits of that very animal.

The Story behind Year of the Pig 2019

There are so many myths surrounding the actuality of how these years came to be named. This time, for instance, is the year of the pig 2019. One legend has it that the Emperor back in the ages was deciding the order in which the Chinese calendar animals were to be decided. The Pig was late, because he overslept, which got him the last slot in the calendar order. Yet another story goes, which talks about how the wolf destroyed the pig’s house because he wanted an earlier slot. The pig got late because he was rebuilding his home again. Nevertheless, this does not at all undermine the potential of the pig, or how it affects the year for the people at large.

More on the Year of the Pig

A pig is a very typical sign of good wealth and fortune. The Chinese New Year 2019 generally too is considered to be the one bringing wealth and prosperity to the people. Imagine a pig generally too, it is a fat animal, well-fed, and looks rich, to be honest. Similarly, the year represents people finding their wishes coming true, be it financially or in terms of networking.

Is your child coming in the Chinese New Year 2019?

One may call out on it negatively by believing they don’t really have much to contribute, but it is this very smooth entry of theirs into every group where they could work any of their motives. It is specifically because of this ability that people born in the year of the pig are considered for the roles of covert operations in social conditions.

Another important thing to know about people born in the Chinese New Year 2019 is that they tend to look at life very realistically, be it financially or regarding the goals they must make. These people may sometimes want to treat themselves, which they wholly and completely deserve, to be honest. However, such instances are so rare that it literally becomes a surprise for all the people around if their pig year friend decides to go out to the movies.

A Tad Bit more on Personality

Another thing one may notice about people born in the Chinese New Year 2019, or the year of the pig to be specific, is that they are always so energetic and full of enthusiasm. For some who have a great interest in astrology overall, one may even compare them to a regular Aries or even a Leo.

Men Born in the Year of the Pig

When it comes to gender roles, the year of the pig again has some qualities reserved for each. For instance, men generally tend to be quite gentle and optimistic, and are usually very career oriented. They understand the necessity of success and put everything they have into achieving it. However, on the downside, they are not as good with their finances as a pig year woman may be.

Women born in the Year of the Pig

Similarly, women tend to be a little on the wild side, with a mind full of partying and everything along with it. But this excitement does sometimes lead to dire consequences, for women tend to become quite over-friendly, which can lead them to divulge more information than is required at certain times.

Compatibility for the Year of the Pig

The Chinese New Year 2019 is one where coming together in a relationship is actively celebrated, and there is good news for all those born in it. For starters, they tend to share most of their interests and values with people born in the years of the tiger, rabbit, and the goat. That is three different years that people are born in after every twelve years. One may even find their true love, and for all the people born in the year of the pig, it is very likely that they finally end up meeting the true love of their life in this Chinese New Year 2019.

The Chinese zodiac calendar has a lot of differences when it comes to comparison with the astrology calendar that is generally followed in the west. However, this completely different set of knowledge can be very useful. Apart from that, the Chinese culture does tend to have its own flavor in terms of everything, which we believe, needs to be enjoyed at the least, if one does not wish to fully follow it, although we strongly recommend that you discover its origins. Here is to a happy new Chinese year to you!