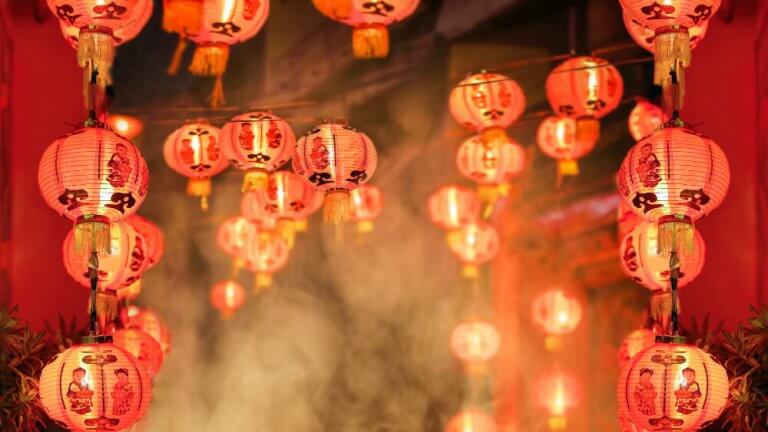 We understand how the words New Year only bring amounts of imagination in your mind, and there are only a few things you can think of, like fireworks, to associate with the celebration of the New Year. But have you ever wondered what really goes into the same thing around the world? The Chinese New Year traditions, for instance, are totally insane and will surprise you to the core, we are ready to bet.

As is the custom around the world, and just like Christmas and the New Year have become synonymous in the entire Western world, the Chinese New Year is also something of a religious celebration. The marking is clear by the people praying to the gods for what follows is a good harvesting season.

2-  It all starts with the Spring Festival

The New Year is subsequently marked by the much-famed spring festival, where everything from cotton candies to paper dragons comes out!

3-  Fireworks in the quantities of millions!

You may have thought that the fireworks you saw last year at Time Square New York were the most fantastic you ever saw, but when it comes to China, literally all the fireworks in the world are no match. This is simply because China alone has more fireworks than the entire world combined when it comes to the New Year’s. The only difference is that China does it with its Spring Festival Chinese holiday, while the rest of the world does it on December 31st.

By now you must be wondering what is so special about the Chinese year that it literally must start off so different than all the other calendars in the world. For starters, this calendar tends to follow the movement of the moon rather than the sun. Hence, one could say that the Chinese year is a lunar year.

Moreover, while a regular astrology calendar has twelve months, with each one dedicated to a zodiac sign, the Chinese calendar instead has a cycle of twelve different years, each one denoted by an animal. An active example of this is the 2019 year of the pig. It is particularly because of such legends that the Chinese New Year traditions tend to become so different yet exotic of a celebration.

6-  Boyfriends and Girlfriends are available for hire

This is where the crazy part comes in. To avoid questions about being settled or how strong their career is now, Chinese girls and boys are used to hiring fake boyfriends and girlfriends to take home and show to their relatives. Someone who is too free may even put themselves up for hiring too.

7-  No showers during the entire holidays

If that did not already make you think how crazy and wild Chinese New Year traditions are, then try this. For the whole duration of the New Year’s holiday, which lasts a whole week, by the way, one is not allowed to shower.

8-  And not even garbage getting out of your house

And if you’re still not convinced, one cannot even throw their garbage out. All your dirt remains within you and your house!

9-  Children get money in special envelopes

Giving children money has often been associated with them getting spoilt and all. But not in the Chinese culture! The people literally hand out bank notes in specially made red envelopes to their children, as well as to children of neighbors and all. It is sort of like Halloween but with money instead of candy!

We know how much the Chinese love their dumplings, they literally eat dumplings every single day, in every single meal, for the whole week. That sure does sound like a lot of tolerance!

11-  There are drinking etiquettes

Guess what festival has its own special drinks for people to down and get drunk? You’re right again, the Chinese New Year traditions! Not only are there special drinks that are made for the celebrations, but they are also drunk in a particular manner, which the Chinese like to call their drinking etiquettes.

The year always tends to end, and subsequently start on a very high note, with the celebrations finishing with a huge lantern festival. This one is followed all around the world, with lanterns filling the sky as they mark the start of the spring festival.

While many people generally start celebrating the Chinese New Year from the first of January, one does not know when it will be starting, because all of it is based on movements of the moon and its sightings.

14-  Time to fight off the monsters

Chinese legends have it that the New Year is there to ward off all evils and demons that have plagued your life for so long. Pray and purify yourself!

15-  The largest temporary human migration in the world!

Imagine thousands of people moving across the world to go back to China, just to enjoy the New Year festivities. And yep, it is the largest temporary human migration that happens all around the world.

The Chinese New Year is actively celebrated not just in the Eastern part of Asia, but the entire world, for the Chinese populations can literally be found across the globe. They’re beautiful people, with beautiful cultural traditions that are actively contributing to making this world a colorful and peaceful place. We would always recommend a try at one of these ideas mentioned above, to not just enjoy the Chinese year in spirit, but also in action!