Freddie Mercury and the Bohemian Zodiac 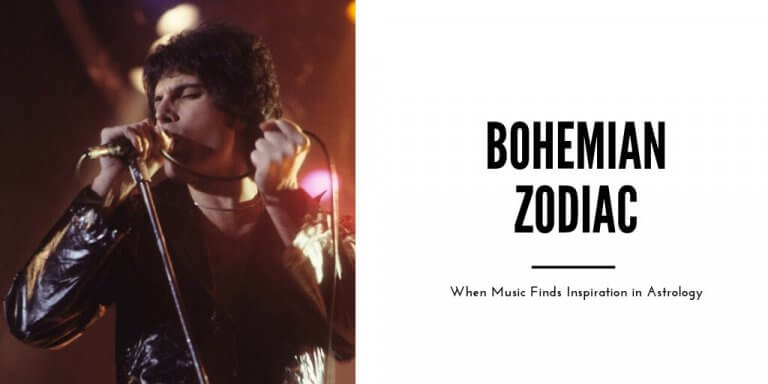 Among the rock stars, Freddie Mercury was a constellation of his own. A being full of magic and talent, that could unfold deep emotions with his voice. His Queen bandmate, Brian May, defined him as a “Lover of life, singer of songs” but there was another passion that marked his existence: astrology. He was a Virgo (September 5, 1946) and like a good Virgo, he was constantly looking for perfection.

The search for an identity

It was not a random decision to choose a planet for a name. After all, Mercury ruled over Virgo and Freddie (born Farrokh Bulsara in Zanzibar) was completely aware of this. Assuming the last name Mercury was the final step to becoming the “persona” he wanted to be.

Mercury is the planet associated with language, mainly communication skills. It is directly linked with the sense of speech and writing. Being a shy boy, Freddie had to struggle with himself until he was able to build the charisma needed for the stage.

As a matter of fact, his oratory skills, given by the influence of Mercury, increased to the point in which he was able to make a profound connection with most of the audience. He was known for the way he was able to involve people during his concerts, making everyone sing and move at his disposal.

Pieces of the zodiac

Another reference to the zodiac can be seen in the band’s logo, which was designed by Freddie Mercury. The logo contains the zodiac signs of each of the members of the band. There are two lions representing Leo, the sign of two of the members of Queen: Roger Taylor and John Deacon. There is also a crab, representing Brian May, the guitar player, who was born July 19th. Finally, there are two fairies for Virgo, the sign of Mercury.

Not really representing a zodiac sign, unless taking it as the transformational symbol of Scorpio, the logo is completed by another iconic creature of astrology: The Phoenix. In this case, the Phoenix is more related to the ability to renew itself or rising again from the ashes.

This turned out to be something normal in the history of Queen, one of the few bands that have been able to hit the Billboard charts in three different decades with the same song “Bohemian Rhapsody”.

But why all these references to the zodiac? The main reason for this can be found in Freddie Mercury’s family background. Freddie was born under the Zoroastrianism faith, a religion that is highly associated with astrology. As a matter of fact, many of the concepts of astrology today owe a lot to this religion.

Even though astrology is more a cultural element than a religious element in Zoroastrianism, for Freddie Mercury the zodiac was one of the main instruments to always be in contact with his own roots. It was part of his personality and his spiritual essence.

Old-fashioned Virgo after all

Even though he did not lead a normal existence, there is no doubt that Freddie Mercury is a faithful example of what a Virgo is like. Even in times of chaos, he had full respect for his profession and was very methodical. He did not mind spending hours in the studio in order to get the best results.

In terms of work, Freddie Mercury was very focused, leading the way and raising the bar. Like most Virgos, he was a perfectionist, determined to succeed, even if he drove everybody crazy in the process. For Bohemian Rhapsody, he insisted on recording hundreds of voices overdubs until he got the sound that he had in mind. And when the rest of the band thought it was enough, he came again and again with a new tone to add to the opera part.

No wonder it took them three weeks to record the song.

Another visible characteristic of Virgo in Freddie Mercury was his tendency to stay rooted in the present. And at the same time, he was someone who took life as if there were no tomorrow. He was not someone that was constantly looking back, but someone with a desire to evolve. He did not want to be trapped in the same style of music. He was constantly seeking innovation.

Loyalty in friendship was also a characteristic of Virgo that was implicit in Freddie Mercury’s priorities in life. He was the kind of person that gave more importance to his friends’ problems, than to his own. He was a good friend and someone that left a mark on the people that were able to get close to him.

What he had, he didn’t have any problem sharing with others. He was very generous with his fortune. That is why, when he died, he left most of his inheritance to his ex-girlfriend Mary Austin, who, after breaking up, became his confidante and closest friend. Only a Virgo would do something like that.