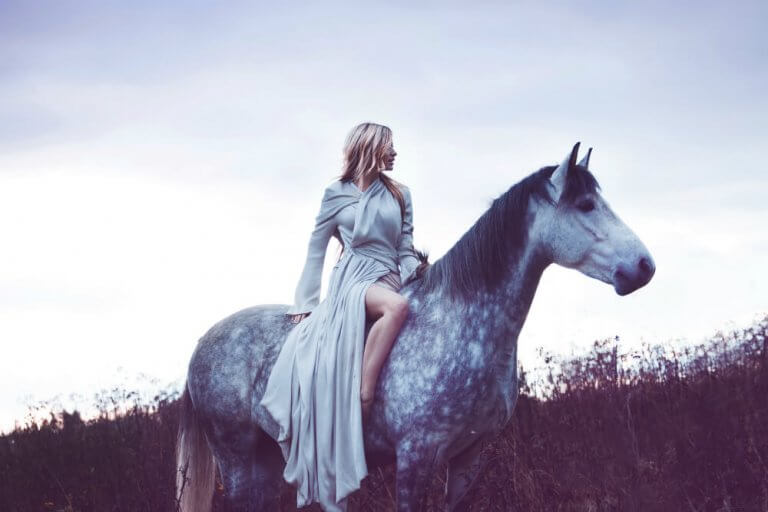 Don’t worry! You can be married or partnered and still fall into the archetype of the virgin warrior. Often partnership might come along later in life, and of course, there can be love affairs along the way. The essence of the archetype lies in quality much deeper than the obvious.  As you read along you might be surprised to find yourself suddenly exposed. Or perhaps you already know it. Perhaps you recognize your forthright and impeccable drive to make a difference.

What is the archetype of the Virgin Warrior?

My definition of virgin refers to impeccability, a tendency towards crystal clarity in approach to a task or to life itself. The warrior part of my definition is the energetic one-pointed focus towards accomplishing a goal or ideal. The virgin warrior archetype is the alchemical outcome of these two qualities—with far-seeing precision and charismatic zest she strives to make a difference in the world.

To identify the classical patterns in yourself and others, you might find clues in childhood, perhaps with fantasies of being Lady Marion in the Robin Hood legends. Or even pretending to be Robin Hood himself. Perhaps you loved climbing trees, playing at wild horses, running through the woods imagining yourself as a hero or heroine bringing a villain to justice.

As a small child, I was let to run freely in the woods at our mountain cabin. I’d spend hours searching for wolf prints on the trails in the forest and imagining myself as a friend to the wolves. In pre-teen years my friends and I galloped our horses across the grassy hills and explored along creeks and canyons. Perhaps playing an ancient drum for a women’s ceremony might appeal. The tom boy or eternal girl (puella eterna) might also describe an aspect of the virgin warrior.

I began to identify, and then to understand the archetype of the virgin warrior while watching Richard Wagner’s four Ring Cycle operas “The Nibelung’s Ring.” In fact, I was stunned. Suddenly I found myself there in the character of the lithe and graceful Valkyrie Brunnhilde, the god Wotan’s eldest daughter, born of Earth Goddess Erda. The virgin warrior lives deeply within what C. G. Jung calls the collective unconscious, and for this reason, many women will find her active in their lives at one time or another, or at least recognize the qualities as soon as they are revealed.

From an astrological perspective, those of you who live with a prominent virgin warrior archetype are likely to find Aries, Mars, and Virgo featured in your chart.

The first sign in the zodiac, a cardinal fire sign ruled by spicy Mars. Often known as the adolescent of the zodiac, you are willing to go off on adventures and invite excitement into your life, often with little forethought. Given that the head rules Aries, with the image of the butting Ram you can tend to be head-strong and argumentative. You have a clear-cut sense of right and wrong, no questions asked. With all of these firm, yet potentially annoying qualities, we are attracted to your Aries’ magnetic spunk and warm personality, your overflowing joy of life, and your willingness to explore the unknown without fear of consequences. You might be athletic or enjoy dancing, especially a dance with a strong beat. You are usually strong and graceful. As with most Aries people you will display a definite sense of purpose. Nobility of spirit pervades your personality

Since Mars is known as the god of war, you might jump to the conclusion that a battlefield and contentious nature alone defines you. To a certain degree, such a delineation is warranted, as most of you with a vibrant Mars energy might tend to find yourselves in verbal and even physical fights. Yet upon examination, there is more to delve into than mere combative nature. You can usually be depended upon to accomplish just about any mission. Even mission impossible! You will have a determined sense of purpose and strive for it with gusto. When you shoot your arrow at the target, you hit the bullseye nearly every time. You are unstoppable. You will go about work, no matter what kind of job, with an enthusiastic let’s-get-it-done attitude, even when the task might be as humble as restocking the fruit and vegetable section of a supermarket. The highest nature of Mars is your ability to zero in and get to the core of an issue or task or concern in any area of life—archeological dig, research project, or baffling crime.

An Earth sign with the winged messenger Mercury as ruler excels at organization, planning, and sorting out details. Fleet-footed Mercury assures that you are the quintessential communicator. The kind of writing or speaking we might expect from you will be colored by the position of Mercury in your birth chart. On the downside, if you are too focused on the detail you sometimes overlook the larger picture, ending up with the proverbial problem of missing the forest for the trees. You love to be useful and to help your fellow humans, and you serve others with graciousness and humility. Virgos are concerned with their own health and that of others. You might even end up in the healing arts. The truth is, because of your investigative and analytical mind you will be accomplished in whatever occupation you choose.

The symbol of the virgin

The symbol of the virgin lets us know that the Virgo part of the virgin warrior’s personality can be complicated, and sometimes confusing, because you might harbor a secret (or overt) wish to be a nun, and at the same time you yearn to be in loving partnership. Vestal Virgins in Greek mythology lend depth and breadth to understanding the meaning of the virgin image. These ancient Greek virgins beginning at the early age of 12 took vows of chastity and kept the temples lamps lit and guarded the sacred space. The Greek historian Herodotus observed in goddess temples in Babylonia that some priestesses served as sacred prostitutes to help a man in need of guidance to commune with the goddess, to find answers to life’s mysteries. Sexual union with these priestesses was not for personal love or lust, but for divine love. See What Greek God are You?

A brief look at her story sheds further light on the Virgin Warrior Archetype and its Mars, Aries, Virgo combination. Imagine the curtains have opened on a stage designed with a craggy mountain ledge. Dressed in Valkyrie armor, carrying her shield and spear, the god Wotan’s daughter Brunnhilde bounds onto the scene with fiery Aries/Mars energy. She bellows her battle cry, “Heyo ho! Heyo ho!” She’s very much a teenage Aries-type tom boy, and in her beauty,  she typifies Virgo. She is devoted to her father and to her task as Valkyrie. She discharges her tasks impeccably, as any Virgo would. Using her special Valkyrie magic spell she ensures the outcome of who lives and who dies in battle. (That’s what the Valkyries do, in addition to serving mead in Valhalla.) One day when Wotan commands Brunnhilde to assure that a certain favorite warrior dies in a duel, Brunnhilde knows her father is wrong. While she has previously followed her father’s orders with Virgo precision, she suddenly and intuitively decides to listen to her inner guidance. With virgin warrior clarity and determination, she refuses to obey Wotan’s command.

A big lot of trouble follows, including the downfall of Valhalla and all the Norse gods, in the “Twilight of the Gods.” When one age dies, another is reborn. So, it will be that when today’s virgin warriors are compelled to break with authoritarian norms, there are bound to be challenged.

For the virgin warrior archetype, the battle is more a metaphor than actual, more of an energy, a thrilling and purposeful enthusiasm towards fulfilling a sense of destiny. Your impeccable and clear-sighted Virgo/Mercury nature, combined with fiery and focused Aries/Mars will serve you in your desire to make a difference in the world, small or large. In this time when women with feminine grace and love are becoming more assertive, and with a visible presence in all fields. With women’s voices being expressed in great numbers all over the world, their input respected in high places, their powerful presence as spiritual leaders, perhaps it’s time to take notice of the archetype of the virgin warrior. In what ways does she live within you? How can you keep watch over the sacred fire in the temple of your life? How can you offer your inborn gifts, impeccably, in large and small ways every day? I have heard that to make a difference in the world, all we need do is to light our one candle and step forward.

Savitri Bess, with MFA in Fiber Arts and MED in counseling psychology, has been a recipient of Fulbright and National Endowment for the Arts Grants. She has lived in Ashrams in America and India for the middle part of her adult life. She has been serving as a professional astrologer and mentor for over 40 years. For consultations, you may contact Savitri at [email protected] and visit her website: www.pathofthemother.com.