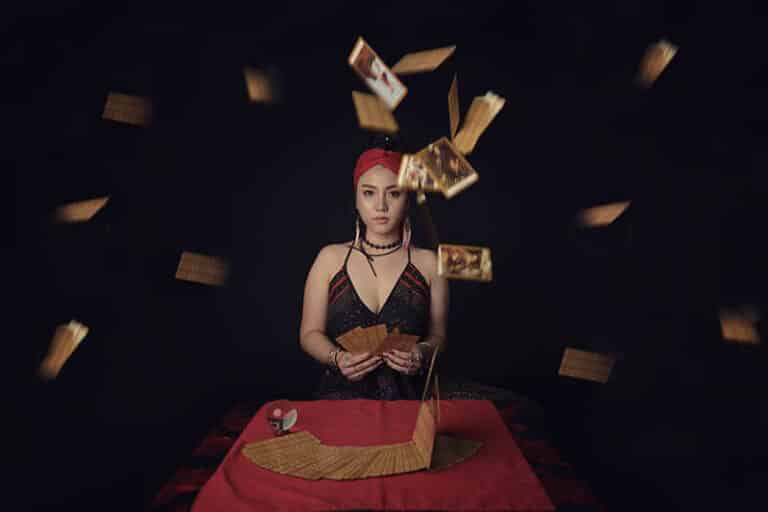 Recently, I had a job reading tarot in a very upscale store in Northern NJ.   I was giving tarot readings to the clientele of the store as part of a promotion and sale.  On average, these types of events are fun; I give five-minute tarot readings so the client can usually ask three questions or so, get answers, and then be on their merry way.

The event, as was the other ones for that whole week, was quite successful and I had two minutes left before I was to leave, go down to the New Jersey shore to do another gig, so my timing was critical.  A very rich and snobbish woman comes up to me and literally throws her seven-year-old daughter into the chair in front of me and said she could have a tarot reading.  I looked at my watch and explained that I had to leave in a few minutes, but I would be happy to answer a few of her questions.  The young child had no idea what I was talking about, so I asked, “Do you want to know about school?” or “Do you want to know about any of your friendships or boys?” to give her a clue about what to ask.  She had a blank stare on her face, looked at her mother who said, “Just do it for fun.”  I looked at the mom and said, “Well, do you have any questions that you would like to ask for your daughter?”  She then went into a tirade that her daughter was only seven and what questions could she have?  Duh.  My point exactly.

She pulled her daughter out of the seat and yelled, “You are so rude. This is (famous store) and not K-Mart!”  (It took me a while to figure out she insulted me because I was wondering what the difference would it have been if I were in K-Mart or this store?  I guess I look like a K-Mart type of customer which I don’t consider negative as they have great bargains sometimes!  I digress.  Anyway, I was stunned that anyone could be so clueless and not understand that tarot is not for children and it is not for fun.  She stormed off, so I made sure I talked to the manager of that department before leaving to tell her about this unfortunate incident, and to my delight, she apologized to me for the customer’s obnoxious behavior.

It actually surprised me that this parent was so totally unaware that tarot is a serious modality that should be used for older teenagers and adults but definitely not for small children under ten.  My concern was what happened if the Death card had come out, or 3 of Swords (which has three swords in a heart) or the Ten of Swords (ten swords in a dead man’s back); did she want her child to see that?  How could I satisfactorily explain them away when she would have seen the pictures?

It got me to thinking that maybe if I am ever in that situation again, I could make a small deck of fake tarot cards that say cute things like FUN, VACATION, FAMILY, BROTHERS, SISTERS, BEST FRIEND, SCHOOL WORK, SPORTS, etc. to give me something to work with.  Another thought would be for me to invent a child’s tarot deck (unless there is one out there that I have not discovered yet).  I know I could use a fairy deck, angel deck, animal deck, etc., but I am truly interested in learning if there are decks specifically created for a young child.

The next day when I did the same promotion in a neighboring state at the same store chain, I had written a tent card saying TAROT READINGS FOR 14 YR. OLDS AND UP.  The readings flew by and they were fun for the children, adults, and for me as well.  The children, all of high school age, had very interesting questions about their careers, intended majors at college, and in fact which college would be in their best interest.  I was happy to give practical and common-sense answers to logical questions. There was no problem at all and fortunately for me no rude parents!  So, I had an enjoyable time.

You would think that customers of upscale stores would be intelligent enough to understand or acknowledge that the services that are offered by these stores are usually top-notch.  I am exceedingly qualified in my field and feel I know what would be best in most situations, especially with this seven-year-old, to determine which way I should handle a reading.  I am glad I made my decision to ask for the child’s questions and in so doing that, the universe actually kept me from doing a reading for her which I thought was a mistake in the first place.  Always trust the universal energy to help you in any situation, as I did and will continue to do.

Victoria Anderson is a published author, a renowned lecturer, and a metaphysical teacher, specializing in astrology. Vikki has been teaching for forty-eight years. Trained in numerous modalities; she is an expert in astrology, tarot, and Feng Shui. She has taught in numerous countries throughout Europe and Australia. Additionally, Vikki is a certified hypnotherapist, certified advanced Feng Shui consultant, an Interfaith minister, and is the author of Inner Realm Magazine's horoscope section for almost twenty-five years. A prolific writer, Vikki currently pens monthly horoscopes, numerous blogs, and her most recent book, "How To Be A Tarot Detective" is now available on Amazon. Victoria Anderson Website